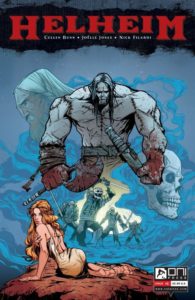 “Once the threshold of Helheim is crossed, not even gods can escape.” The age of Vikings. Savage wild men, dark creatures, and hideous undead are pawns in the war between witches. A hero named Rikard pays the ultimate price in this conflict… but his fight is far from over. Raised as a draugr—an undead killing machine—Rikard is meant to be used as a weapon in the supernatural conflict. But Rikard will not be controlled. And where the draugr treads, death follows.
———-

The frozen tundra of the north.

No, not Lambeau Field (but that game yesterday did kick ass)… we’re talking Vikings (also, not talking about football…).

Rikard leads his Norse warriors, many already wounded and well on their way to the great mead hall in the sky, in full retreat. Their enemies, savage minions of the witch Groa, are fast on their heels. The only chance Rikard and his people have is to make it back to their walled village with enough of a lead that the gate can be opened without risking their enemies getting in among the people. Not much of a chance at all. Failing safety behind their walls, the warriors stand in front of them, their backs to the stout wood beams that surround their homes. As good a place as any for a last stand.

A reprint of a title that originally released in 2013, Helheim is a book that I’m more than happy to revisit, especially now that Oni Press is re-releasing it under their “Square One” line of popular titles. It’s got every element that a comicbook fan could possibly need for it to qualify for a pull list. It’s got Viking warriors. It’s got zombies (they’re kind of a thing right now…). It’s got witches. It’s got more decapitations than you can shake a bloodied battle-axe at. Last but absolutely not least, it’s got an outstanding creative team.

Written by Cullen Bunn, Helheim is filled to the brim with character driven drama and violent action. Anyone familiar with Bunn’s work (The Sixth Gun, Harrow County, The Damned) might have some idea of what to expect, but for the uninitiated I’ll try to give some insight. Cullen Bunn has a knack for writing the supernatural that is in itself bordering on the supernatural. He scripts tales of creeping horror, and never shies away from laying on character deaths that would make George R. R. Martin cringe and exclaim “Dude, I LIKED that guy!” Frankly, I’m not sure how Bunn manages his time, because it seems like lately he’s been attached to more high profile titles than some writers will see in a career. I’m a fan, and Cullen Bunn is quickly making the list of creators whose work I’ll pick up just because they’re attached to it.

More than just pretty words, Helheim sports some pretty awesome artwork compliments of the team of Joelle Jones (art) and Nick Filardi (colors). As I’ve already alluded to, this is a violent and bloody title, and in keeping with that Jones and Filardi have produced a viscerally ferocious piece of work. Jones, whose previous body of work has ranged from romance (12 Reasons Why I Love Her) to crime noir (You Have Killed Me) to the mystic (Madame Xanadu for DC’s Vertigo label) might not have seemed like an obvious or easy choice. Rest assured that for Helheim, she’s tapped into something special in her artistic endeavors. Her work here is brutal, the action clear and efficient, the characters distinct and drawn with an eye toward their individual character. Rikard is given the appearance of being a young warrior on the rise, thoughtful and fast in battle. His father Kirk is drawn as the stocky bulwark of a man, an old veteran of countless fights. The finishing touch to compliment Jones’s art is the color added by Filardi. He gives the environments a feeling of cold isolation that lends tension to the overall story of a village alone against supernatural forces. We’ve already talked about the bloody action that takes place within the pages of this book, and Filardi’s work gives a great contrast of that blood red against the blue palette of the frozen backgrounds.

Not a new title, but one that is deserving of a re-release, Helheim is a fitting title to tickle the fancy of fans of both horror and action. Followers of The Walking Dead, Penny Dreadful, or Vikings (History Channel’s first- also successful- stab at original programming), should be able to find plenty to love about this title from Oni Press. 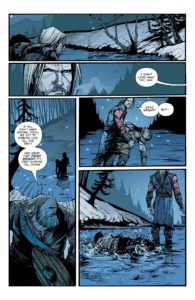 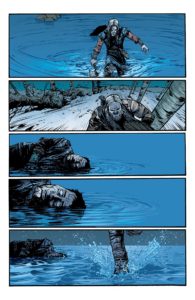 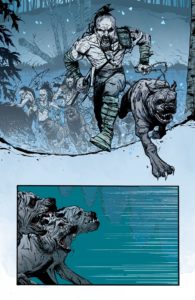