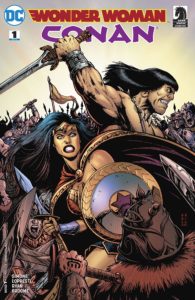 What makes one a legend? How do legends carve their names into history, when countless others are forgotten? Wonder Woman and Conan the Barbarian are destined by the fates to be legendary, but when their stories collide, will both emerge victorious, or will the fickle Gods cut their lives short? Co-published with Dark Horse Comics.
———-

Before you start, with all the indignant cries of “she’d never have anything to do with that ape!”, we need to make something clear. This isn’t a story about time travel, with Diana being transported back to the Hyborean Age. This is more of an Elseworlds tale of an age undreamed of, where Conan is haunted by a memory of his youth, when he accompanied his father to a summit meeting of clan and tribal elders. At the meeting, a contingent of female warriors from an unknown island attended. With them was a young princess, the daughter of the tribe’s leader. Her name was Yanna, and “to Conan, she walked in mystery.”

Many years later, Conan the Barbarian is well on his way to legendary status when he comes across a group of Aesir about to reap some vengeance on a lone Aquilonian. An offer of gold coins stacked “high as a newborn fawn and bright as the sun” is enough to overcome Conan’s normal animosity toward Aquilonians in general, and as it so often does in a good Conan story, violence ensues. The battle is won (of course), and the Aquilonian confesses that he doesn’t actually have the promised payment (of course), but that it’s close. Said payment is currently taking the form of a wager made with a local slaver named Dellos. It’s a sure thing, as the wager is against Dellos’s champion gladiator. But wait, the fool is betting against the reining champion pit fighter? What chicanery is this? Fear not, faithful reader, for this supposed champion is a mere woman and there’s no way she can hope to win out in her next scheduled fight.

I’m not going to beat the dead horse here, folks. Of course, this champion is none other than “Yanna”, grown hale and hearty. By some cruel twist of fate, she’s found herself captured and enslaved by Dellos, forced to fight with the slim hope of eventual freedom dangled before her. She has no memories of her past, or apparently how she came to be held by a dirty slaver like Dellos. What is certain, however, is that upon seeing her in action, Conan is convinced that this is the mysterious young girl from his memories. With those memories rushing to the forefront, he determines to rescue her from captivity.

Y’know what? I can still see that look on your face. No, don’t deny it, you’re thinking that there’s no way this is going to work, that these two characters are so far removed from each other in mentality and temperament, they’d kill each other within the first few panels of their meeting. More to the point, Diana as we know her would knock Conan flat out the first time he called her “wench”. I’m just gonna remind you that this isn’t quite that Diana, and that you’re just gonna have to bear with the story a bit, because this title promises to be way better than it has any right to be.

First, I’m going to direct your attention to the top of the article, where it says “Written by”. What’s that name? Maybe you’ve heard it before? I’m led to believe that Gail Simone is something of a big deal in the comics industry, and stands as one of the most respected voices when it comes to the treatment of her female characters. By whatever circumstance “Yanna” may have come into captivity, it’s a pretty fair bet that things will be rectified before too long. If you’ve read Simone’s run on Red Sonja, then you shouldn’t have any doubt at all that Wonder Woman is in good hands, in terms of story. As for Conan, it looks like Gail has done her share of homework on the big lug. He’s as cynical and surly as he’s ever been, holding to his own sense of honor. Even before recognizing Yanna in the arena, surrounded by enemies out for her blood, he wasn’t particularly happy about the situation (readers of Robert E. Howard’s work are going to remember that Conan spent more than his fair share in the same situation, so it stands to reason that he’s going to have his opinions on the gladiator slave gig). Simone hasn’t overly softened his attitude, but she’s definitely given Conan reason to want to run to the rescue.

Of course, we have to talk about the artwork. The team of Lopresti, Ryan, and Broome have captured the epic brutality of Howard’s world. The Hyborean Age wasn’t for the soft or the weak, and violence was always just one perceived insult away. The action is fast and furious (minus the car chases), staged and choreographed perfectly, and in keeping with Robert Howard’s original description for Conan, he’s more leonine Momoa than bulky Schwarzenegger. John Romita Sr couldn’t have done any better. Even better so far as I was concerned, the way Lopresti has presented Yanna/Diana here is perfect. All of the classic design aspects are there, but it’s more in sort of a tribal war paint than costume, completely in keeping with the setting she’s being presented in. There are no bright primary colors here, it’s all muted animal skins and leathers.

This title looks like it’s going to be the perfect balance of fan-service and homage to two classic figures of heroic fiction. Sure, they’re very different people, but I’m looking forward to seeing how things progress as Yanna starts to get some of her memory back. Who knows, maybe I’m wrong and this really is a space/time continuum sort of story, and we’ll get to see Conan yanked forward into Wonder Woman’s present… yeesh, what a thought there, huh? 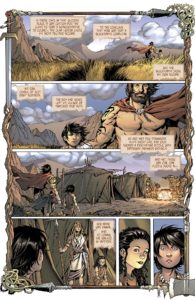 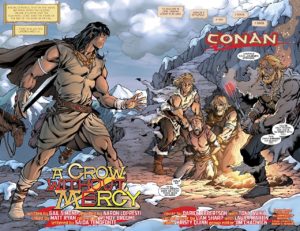 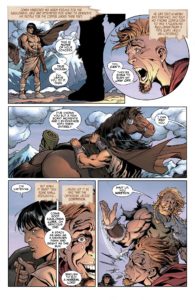 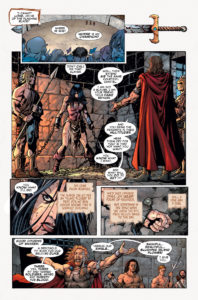