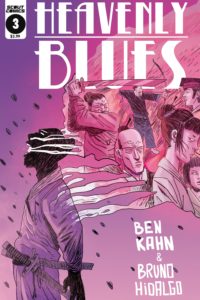 Say, hypothetically, you were an angel… no, not just a “really nice person, loved by all”, but an honest to (sorry) God member of the Heavenly Host… and you wanted something stolen, where would you go? Not just any old thing, either, but a holy relic, kept by an archangel in an impregnable vault. In Heaven. Who could you possibly recruit for that kind of gig? Certainly no one actually in Heaven would be qualified to pull off that kind of job.

Barbiel Angelus, of the Heavenly Third Sphere, has come up with the answer. He’s hired Isaiah Jefferson, a bank robber in life, currently serving out his sentence of eternal damnation in Hell, and left it up to him to put together a team. Isaiah’s first pick is Erin Foley, a child accused of witchcraft and damned for the revenge she took on her pedophile accuser. Rounding out the team is Egyptian spitfire Amunet, gun slinging con man Coin Counter Turner, and drug addicted ninja master Hideki. All they have to do is make their way across the slums of Hell, to a secret passageway that will take them past the Gates of Heaven. From there all they have to do is slip past whatever security measures an archangel might have in place to protect a valued and holy relic.

Oh, and the word is out: Isaiah and his crew are wanted, and the reward has legions of demonic thugs from all walks of death, out for their heads. Easy peezy.

All I really needed to know about this title was that it was sort of an “Ocean’s 11” caper, set in the afterlife, starting out in Hell and ending up in Heaven. That’s the kind of spin that hooks me, pretty much every time. When I got my first copy of issue one from Ben Kahn a while back, my interest was piqued. After I read that first issue, the hook was placed and set. Kahn’s version of Hell isn’t all lakes of burning fire and cackling demons reveling in the torments they deal out. Beyond a damned soul’s initial arrival, during which time all traces of hope are taken away, Hell is a whole lot of nothing. The lost souls are left to find whatever diversions they can, a dreary existence with nothing much to do for all of eternity. Most of their time seems to be spent in a washed up tavern, drinking tasteless beer that doesn’t get them drunk, and chatting idly about the same old stuff. Every. Damned. Day.

The second issue fleshed out some of the characters, and made it plain that Hell isn’t just for the unmistakably evil. Isaiah, for instance, was a bank robber, sure. However up until his last job, he went to great pains to make sure that no one was hurt. When things went bad, as they so often do, they went bad in such an epic way that there was nothing left but to go out in a blaze of glory. Likewise with Erin. She’s no saint, to be sure, but the circumstances surrounding her life and death make her a very sympathetic character… also not one that you’d ever want to cross. The bottom line here is that Ben Kahn has created an afterlife that breaks away from dogmatic stereotypes, populating it with interesting and- the odd psychotic tendency notwithstanding- likeable and interesting people.

Good writing without any illustration does not a comic book make, and since we’re talking about comic books here I think the work of Bruno Hidalgo is worth mentioning. It’s pretty cool. Insightful, right? Hey, I don’t know art, but I know what I like… And initially Hidalgo’s style is a little rough, not really the traditional kind of look some might expect to see. That absolutely works in this book’s favor, as it fits well with the concept of Hell… Not just in the penciling/inking, but also in the way Hidalgo uses sort of a dingy, washed out color palette. He gives Hell a dreary, soul-killingly boring look, leaving backgrounds devoid of anything even approaching “life”, achieving sort of a dusty look all around (the area… neighborhood?… of Hell our central characters occupy looks like small town America during the Great Depression).

Heavenly Blues may seem to be taking its time to get to “the good stuff” (i.e.: the Heist), but it’s time well spent as we get a little backstory on the members of the crew. With this issue, the third, it looks like things are getting ready to start rolling along, though, and I’m looking forward to it because the action I’ve seen so far has been handled well by Kahn and Hidalgo. Also, I’ve been having a good time with the chatter between the characters… With the exception of Isaiah and Erin, I couldn’t exactly say that they’re all “friends”, but they do have a level of familiarity that leads to some entertaining dialogue.

Or maybe that’s just Hell talking… when you’re doomed to eternal boredom, who wants to take the time to get to know a person before the inappropriate banter starts? That Erin looks like the most foul-mouthed pre-teen you’ve ever seen (she’s been in Hell for over three hundred years and has a little bit of a temper on her) just gives it a little bit of a punch.

Fans of the traditional heist caper will come into this story with certain expectations. Those expectations should be met pretty easily, and promptly exceeded given the left-of-center spin behind Heavenly Blues. 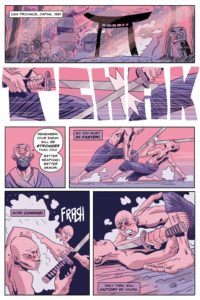 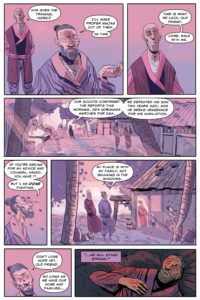 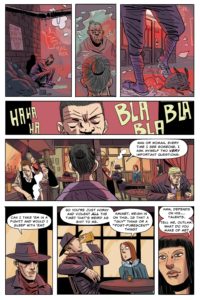 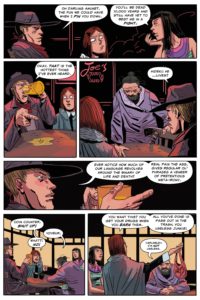