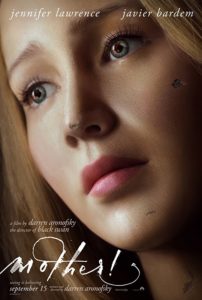 Hey there Pullbox readers!  We’d like to welcome our new reviewer Casey James to #ThePullboxCrew! You’ll be seeing more movie reviews around here, thanks to Casey.

Mother! was written and directed by Darren Aronofsky, who is also known for directing Black Swan and one of my personal favorites Requiem for a Dream and stars Jennifer Lawrence (Hunger Games series, X-Men series, etc.) and Javier Bardem (No Country for Old Men, Skyfall, etc.).

Right off the bat, I should warn that this movie is not for everyone!! It will divide audiences with some leaving the theater in disgust and others appreciating how crafted, and symbolic Aronofsky portrayed this story. 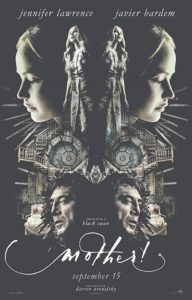 Mother!’s plot was unique and complex, in a way that nothing was ever really explained nor were there any character names. We simply know that a poet named “Him” is living in the countryside with his supposed wife, “Mother.” The first and second acts of the film do an excellent job of pulling you in and keeping you engaged and interested with only a few scenes that slowed the pacing down. The cinematography rightfully earns praise with camera angles that kept the characters close to the screen and made the viewers feel like they were in the same house by giving off a claustrophobic sensation. I only recalled seeing a couple of wide shots in the entirety of the film. Due to insufficient explanation, there was a certain unpredictability to this film which was a rare quality, especially in today’s movie industry. 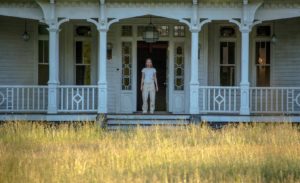 The third act was an entirely different beast and will leave you dumbfounded and breathless as so much occurs all at once. It’s hard to take it all in and process it. However, this film has not left my mind since I got up and walked out of the theater once the credits rolled. With the amount of crazy imagery and deep meaning that is layered underneath, it’s hard not to think about it for some time. With that being said, this bizarre final act will turn many people off as it’s confusing and will require much further thought and research. I can picture this becoming a cult classic somewhere down the road, but for now, will leave many people walking out scratching their heads and debating whether that was worth two hours of their time.