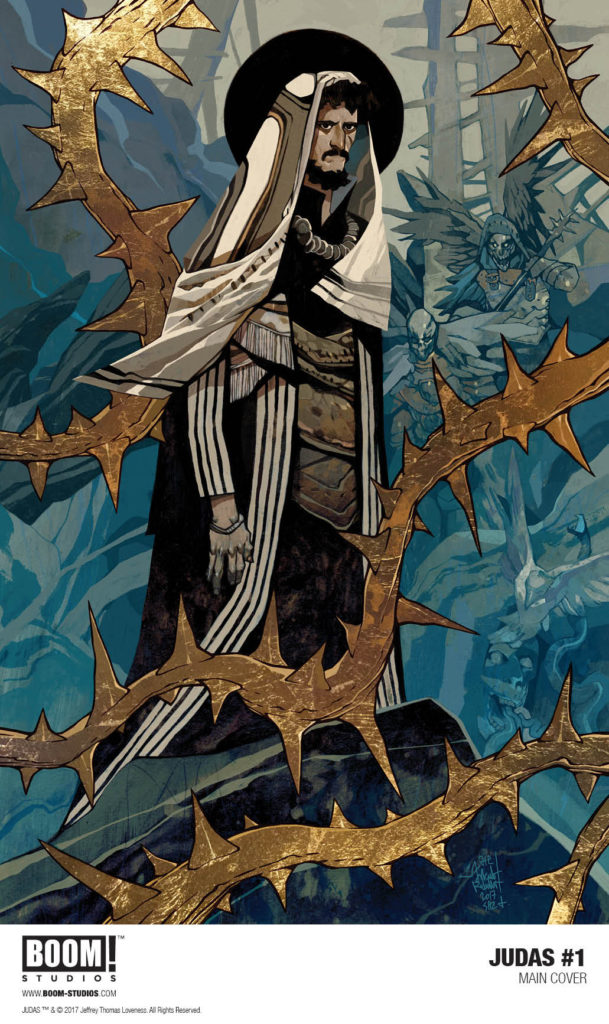 BOOM! Studios is excited to announce JUDAS, a new comic book series launching in December from Emmy and WGA Award-nominated writer Jeff Loveness (Marvel’s Nova) and artist Jakub Rebelka (Namesake) that follows the path of the most famous traitor in history. In a story perfect for fans of Preacher and The Goddamned, JUDAS picks up after the crucifixion of Jesus Christ,  as Judas Iscariot wakes up in Hell and grapples with his role in “The Greatest Story Ever Told”—and how much of his part was preordained.

“Growing up, I always felt sorry for Judas,” says Loveness. “He’s always portrayed as a villain and the epitome of betrayal, but the entire Christian narrative of redemption and forgiveness hinges on him. He was born and destined to play this part in the story. There was never a chance for him to be anything else.”

Loveness continues, “I’m really looking forward to diving into an unexplored corner of Christianity as Judas journeys through Hell, trying to make sense of himself and his place in the story. Judas in Hell is such a striking image to me. Hell is full of broken people, used by God in His grand story, then cast aside forever. Everyone feels alone and wasted… and it’s up to Judas to navigate through them all as he claws towards something resembling closure.”

“Working on this story is a strange journey back to a time when watching images of Hell was my weekly routine,” adds Rebelka. “I grew up in a place that has more churches per square meter than anything else. When I was a kid, everyone was attending Sunday mass, it was a strong cultural thing. With JUDAS, I wanted to bring those childhood memories back to life, reminiscent of the overwhelming atmosphere of church with candlelight, gold, and blood.”

“Jeff and Jakub are crafting a literary, challenging piece of graphic fiction, pulled from between the lines of ‘the Greatest Story Ever Told’ and starring a tragically tortured protagonist in the vein of The Sandman’s Dream or Preacher’s Jesse Custer,” says Eric Harburn, BOOM! Studios Editor. “No matter what your religious beliefs may (or may not!) be, we promise: this story is for you.”

JUDAS #1 features a cover illustrated by Jakub Rebelka. Print copies of will be available for sale in December at local comic book shops (use comicshoplocator.com to find the nearest one) or at the BOOM! Studios webstore. Digital copies can be purchased from content providers, including comiXology, iBooks, Google Play,  and the BOOM! Studios app.

For continuing news on JUDAS and more from BOOM! Studios, stay tuned to www.boom-studios.com and follow @boomstudios on Twitter.