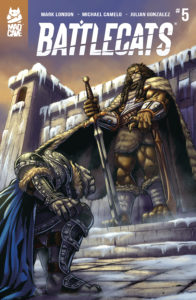 Mad Cave Studios proudly announces the release of Battlecats #5 available for purchase through Amazon/Kindle and DriveThru Comics with a Comixology launch coming soon.

The Battlecats return to a tense Stormholt City where they face an incredibly tough decision that directly affects King Eramad III and his kingdom. Elsewhere, Valadar and his band of evil villains lay the foundation for what could be a dark, hostile takeover of Valderia. What will become of our heroes? Is Valderia at risk?

Find out in Battlecats #5–the riveting conclusion to Battlecats Volume 1: The Hunt for the Dire Beast!
———-

With a sizeable gap between Battlecats since issue 4, the fifth and final installment in its inaugural story arc titled “The Hunt for the Dire Beast” has seen the light of day. Since its launch in December of 2015, Battlecats has been a visually outstanding fantasy series following a legendary group of warriors chosen to defend their people and serve the crown. Sent out to put down a monster of mythical proportions, the current team is late in returning to Stormholt to report on their success to King Eramad. As things so often go in the worlds of epic fantasy, this mission wasn’t quite as straight forward as the Battlecats thought, and the Dire Beast isn’t quite what they’d expected.

When I caught my first taste of the books Mad Cave Studios was putting out, I was impressed with the style and quality of the artwork (no, really… check out my earlier review here). Above and beyond everything else, the look of their titles is always well above par. In particular with Battlecats, their flagship title, the art stands up to some of the best fantasy art in comics. That’s my opinion, disagree if you want, but I’m keeping it. Battlecats looks like something out of a World of Warcraft book, with impressively designed characters of heroic proportions, populating a world of varying landscapes. The artistic team of Camelo and Gonzalez are top shelf, without a doubt.

Also, the work of Mark London as a writer is developing. Where the earlier issues of Battlecats stuck mainly to the action, this fifth issue introduces some intrigue and courtly politics… one might think London has been watching Game of Thrones or something. Characters are starting to show depth, and the dialogue (always one of my sticking points) has come a long way. In the opening issues, I got the impression that Battlecats was hoping to soar on the merit of the artwork alone. There’s nothing wrong with that, as any comic needs to find something to set it apart from the multitude of titles out there. That was something Battlecats did in spades. Now, however, it looks like London is stepping his game up and building a more layered story to go along with the outstanding visual quality of the title.

Fans of fantasy action shouldn’t have any trouble at all finding something to like about Battlecats. If you haven’t checked it out already, you really should give it a try. If you’ve been reading along from the beginning, you don’t really need to be reading this article… except if no one reads my stuff, I’m likely to find myself standing on the outside of thePullbox’s proverbial window, face pressed against the glass like a starving orphan in a Dickens novel. So forget I said anything… of course you should read this article, and every other awesome article posted on our site. 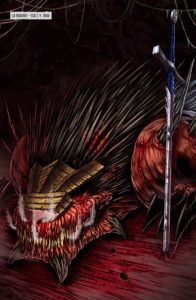 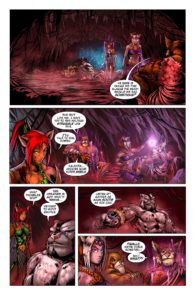 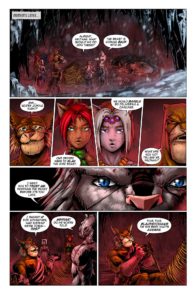