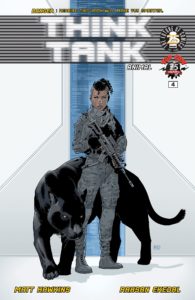 Several key NATO figures are assassinated…by animals? Someone has perverted Dr. David Loren’s surface thought-reader and turned it into a device that sends animals on kill missions. Still recovering from his recent suicide attempt, Loren is forced back into the military game to help uncover who is behind this. His fragile relationship with Mirra Sway is tested even further when his father shows up…with a sister he didn’t know he had.
———-

Recruited into government service in his teens and spending his formative years coming up with new and inventive ways to commit violent acts working for DARPA, Dr. David Loren has painted himself into a bit of a corner. After a recent suicide attempt, his overseers are reluctant to put him back to work, and his girlfriend/CIA operative Mirra has pulled the plug on the relationship (which, incidentally, began as an assignment for her, keeping tabs on David). But that’s all just fluff, because there’s an assassination plot in the works, using David’s stolen tech to kill the President of Turkey while leaving a trail straight back to the United States. Cuz apparently we don’t have enough problems out in the world these days…

Folks, I’m not gonna work overly hard to sell you on this series. If you give it half a look, it’ll damn near sell itself. Matt Hawkins and Rahsan Ekedal have put together a story based in our world, using tech that either already exists, or is damn close to it. What’s more, at the end of each book, Hawkins goes into science-guy mode and breaks down the highlights of the very cool stuff used in the story (he’s kinda smart, is what I hear). So you get a very entertaining, well-written story featuring some very cool characters who act like real people, and you get a little background on how plausible the whole thing really is. Let’s see Superman pull that one off.

All of the great writing from Hawkins is highlighted by the outstanding artwork of Rahsan Ekedal. Keeping in mind that there are no superheroes flying around in tights, it’s an impressive feat he pulls off in crafting a cast of characters who could be normal everyday, but very smart, people. And being the next best thing to real, these people change and evolve along with their story lines… Point of fact, David’s kinda looking like crap in his latest story arc, what with the drug use and suicide attempt. Looking back at the first arc in the series, you can see how David’s come apart at the seams.

The tragedy here is that this is one of the most well-written titles that I’ve seen in print for quite a while, and it might be going away. Sales have dipped as individual issues just don’t seem to be moving, falling prey to the growing phenomenon that has so many people deciding to sit back and wait for the trade paperback volume. That’s all well and good, but if the issues don’t sell, there won’t be a trade edition… so you see the conundrum. Sure, I get it, trades look better on the shelf, they’re easier to collect, and often they’re less expensive. What’s more, when you’re talking about story arcs it’s easier to binge through a collected edition from start to finish (I’ll confess, that is how I started out with the series), rather than in monthly installments. Is there an easy fix that makes everyone happy? I don’t know. But I can tell you that if Think Tank falls to the wayside, it’ll be a tragedy because I’m kinda hooked.

And now here I am, doing my small, probably ineffectual part to spread the word about a quality series that should be flying high, instead of resting on the chopping block. I’m not gonna say that reading Think Tank will make you smarter, or help you in the dating world. What I will say is that if you start reading it, you will be entertained. Think Big Bang Theory, but with more violence and mayhem, less Kaley Cuoco… 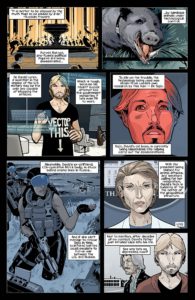 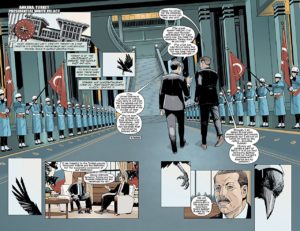 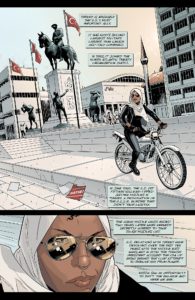