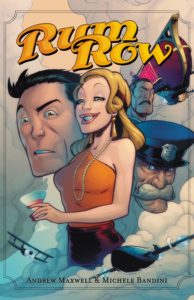 Check out the Kickstarter for issues 1 & 2!

To avoid dry laws, rumrunners and patrons alike have taken to the sky. Hot air balloons and dirigibles now serve as speakeasies and black markets for alcohol. The press has coined these flying bars above New York “Rum Row”.

Despite operating outside the law, Rum Row has become a worldwide tourist attraction. Faced with growing concern over the lawlessness of its airspace, the city has created a special aerial vice squad to monitor and crack down on the sale of alcohol.

One ship in particular has been a thorn in the city’s side since the beginning: The Duchess, New York’s premier flying speakeasy. In this story, we’ll follow the NYPD’s attempt to take down the Duchess once and for all, through the eyes of one of its passengers, Jack Tinson. All the while, Jack’s own allegiances and motivations remain in question…
———-

With Prohibition in full swing and NYPD cracking down on speakeasies in the city, the city’s skyline has become filled by airships, zeppelins, and hot air balloons as the real party has taken to the air. Aboard the Duchess, the crown jewel of Rum Row, Jack and his friends are getting ready to kick the celebration into high gear. A chance meeting with Annie- or more specifically with the tray full of drinks Annie was carrying- gives Jack a chance to break away from the group for some fresh air. The reprieve is much needed, as Jack has more on his mind than just alcohol and making merry… and Annie may not just be the pretty waitress she seemed to be.

So I did a little bit homework after reading Andrew Maxwell’s Rum Row, and I found out some things about the origins of his concept. During the years of Prohibition (1920-1933), certain entrepreneurial folk abandoned the hazards of trafficking liquor over land and took to the open ocean. Using maritime law, these rum runners would anchor their ships just beyond the limit of the authority of the United States Coast Guard, keeping to international waters. Boats would come out to meet them and transport their wares ashore in the hopes that authorities would have a tough time keeping track of the entire coastline. There was often violence as rivals came to blows over shipments, and the open waters became a battleground where hijackings and murder were commonplace. It became so bad that the government turned over a number of naval destroyers to the Coast Guard in the hopes of bringing the violence under control.

Maxwell took this chaotic period of American history, and gave it a spin. His Rum Row has abandoned its maritime origins and taken to the sky. If it flew or floated, from balloons to zeppelins, it became a flying speakeasy in the skies over New York. The crown jewel among these airborne party platforms is the Duchess, captained by the mysterious Annie Blanchard. If the NYPD could bring her down, taking control of the Duchess and Annie into custody, that would be a huge win for them and a crushing blow for the lawless rebels crowding their skies. To me, the concept came across like a mix of the Untouchables and Crimson Skies, although not quite as outrageously dieselpunk as the latter.

Michele Bandini’s artistic flair lends itself very well to both the period and its more fantastic elements. Everything is clear and distinct, plenty of detail put into the backgrounds without cluttering the fore. If I had to define the style, I’d say that it’s almost cartoony, almost Disneyesque. One spread in particular stood out, that being the view from bridge of the Duchess that showed the airships of Rum Row in all their glory, floating above a 1920’s New York skyline.

Birthed through a successful Kickstarter campaign, the first issue of Rum Row was conceived by Andrew Maxwell to work well as a standalone issue, just so that the ideas bouncing around in his head would see the light of day. Now that the opening issue has been well received, Maxwell and artist Michele Bandini have taken to the skies again with another run at Kickstarter for a second issue.

The concept of rum-running gangsters may be familiar, but Rum Row takes the classic concept and makes it something new. Come on… we’re talking “sky pirates” here! That’s at least worth a look, right? 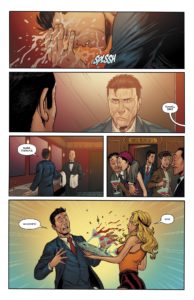 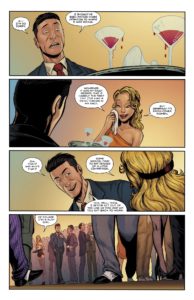 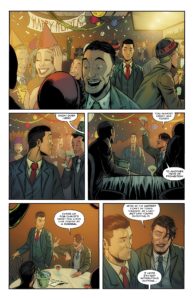 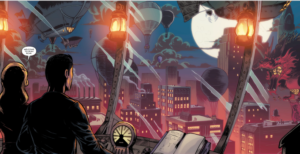