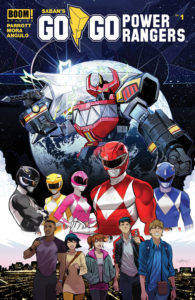 The untold, personal story of what happens to Jason, Kim, Trini, Zack, and Billy following in the days after they first became Power Rangers. Fighting evil is hard, but surviving high school may be even harder-welcome to real life in Angel Grove.
———-

In the aftermath of the Power Rangers’ first battle in defense of the town of Angel Grove, the city is trying to recover. Rescue efforts are under way as work crews try to clear the debris of what was essentially a successful initial outing against the forces of Rita Repulsa. Meanwhile, back in their normal lives the kids are back to the mundane. History quizzes, school bullies, curfews, and finding time for high school romance all vie for equal time, ignoring the true awesomeness that is just one Morph away.

In previous Power Rangers stories, we meet up with the Rangers a little farther along in their… um… Rangering. Go, Go Power Rangers picks up pretty much the day after their first actual fight against Goldar. They saved the day, and most of Angel Grove, and are now trying to find some balance as they settle into the roles as “space ninjas”. It isn’t as awesome or easy as the TV show made it look (probably due to the higher level of writing, compliments of Ryan Parrott), as the teens try to come to grips with the complications of their dual lives.

I’m gonna confess. When the original Power Rangers television show started up, I watched it. My daughter made for a handy excuse, as she was thankfully more interested in the Rangers than in Barney the Purple Dinosaur (dodged that one, big time). Hokey, cheesy, and often painful stereotypes aside (seriously, people, the Asian girl is the Yellow Ranger and the black guy is the Black Ranger?), I still managed to be entertained by the show’s action while doing my best to ignore the bad scripting and acting. Don’t get me wrong, I don’t really have anything at all against the kids themselves. They did fine with what they were given. Rita? Bulk and Skull? Aargh! Their aneurism inducing awfulness was a trial to test the likes of Job and Mother Theresa.

When Boom! announced that they’d be revisiting the classic Saban series- itself a mishmash of footage acquired cheaply from the Japanese series Super Sentai- in 2016, I was cautiously optimistic. There was a lot of potential for easy entertainment in a comic book series, and Boom! has built up some solid credibility with their TV/movie to comic book adaptations (Sons of Anarchy, Die Hard, Planet of the Apes, and Big Trouble in Little China to name a few). What I didn’t expect was that they’d take the Mighty Morphin’ Power Rangers seriously, and actually expend some effort in recreating something good from something pretty darn bad.

In Go, Go Power Rangers, Ryan Parrott continues to build on the ground work laid out in the Rangers’ other titles. No longer are the characters of Jason, Zach, Trini, Kimberly, and Billy doomed to remain simple caricatures of high school kids as written by talentless hacks. They’ve been given pasts, they have lives outside of putty smashing, and unfortunately they have problems. Brainy Billy remains the target of apish bullying from the likes of Bulk, despite the fact that as the Blue Ranger he could launch the idiot into orbit. Jason constantly pushes himself to make up for past mistakes. Kimberly has a guy that she really likes, but can’t seem to find the time to be with him as her Ranger missions continue to intrude. Their lives are split in two, not at all neatly, and the burden of secret identities is shown to be pretty heavy. None of that is including the ever-present threat of the still tragically named villainess, Rita Repulsa.

So, okay. We’ve covered the writing. It’s pretty decent… even good. But this is a Power Rangers comic book, right? So, how’s the action?

Boy, am I glad that you asked. This is where Dan Mora comes in, delivering artwork that more than does justice to the Rangers and their more action-oriented skillset. From an earlier scene where the Rangers are kicking back on the shoulders of their MegaZord, taking a moment to relax and enjoy the scenery, to later pages where they’re transported to the moon, Mora makes sure there’s plenty going on from panel to panel. The action is as dynamic as you’d expect from the Rangers, and what’s more the cry of “It’s Morphin’ time!” (followed by the inevitable, some might say mandatory, Power Rangers action pose) is handled well enough to avoid cringes and eye rolls.

In the end, there’s more than enough good going on in the opening issue of this particular series, which is looking to fill in some of the gap left uncovered at the start of the Power Rangers’ career. With writing and character building that has no trouble outshining its source material, backed up by solid artwork, fans of easy action reading who remember the old days with a bit of nostalgia could do a lot worse.

So what’re you waiting for? Go on… say it with me. 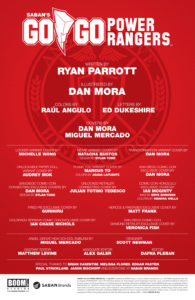 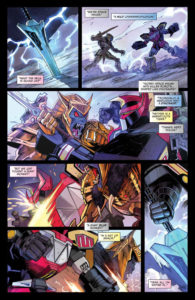 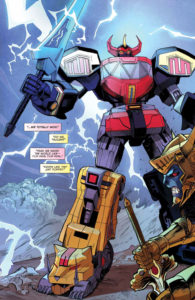 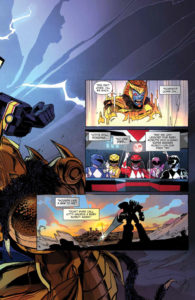 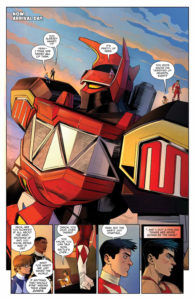 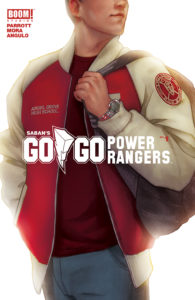 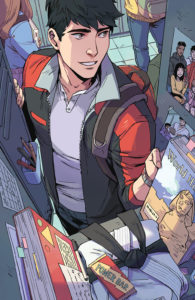 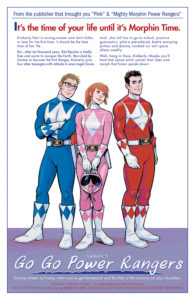 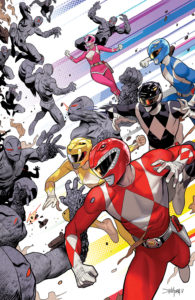 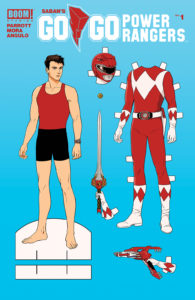 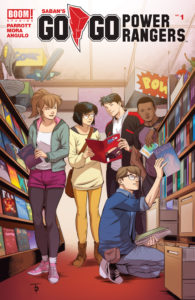 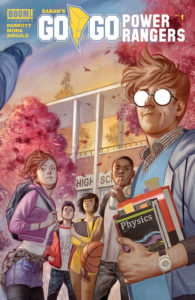