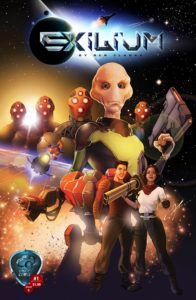 In the the not too distant future, the first official contact is made with extra terrestrial life forms. They arrive not as conquerors, but in need of refuge as they run from a superior foe. As they eventually settle on Earth, not all humans are happy to co-exist with them. Tensions grow and conflict arises. With the humanity deeply divided, a new threat reaches Earth. The very same threat that drove the alien refugees from their home planet, in search of a new one. Can the joint human/alien forces resist the onslaught? Who are these invaders? Can the humans overcome their deep divisions and unite against them? Find out as the story of Exilium unfolds.
———-

A new generation has been born into a world that sees the Earth inhabited by two separate races, human and alien, living together as an integrated society. The inevitable happened. Just when things started looking good despite the heated divisions, the race that had chased our new friends and neighbors away from their home world arrived to set their sights on ours. On the brink of annihilation, the combined resistance forces made up of humans and aliens alike are hanging on by their fingernails. They’re about to make one last attempt to defeat the enemy in an all or nothing gambit against the common foe. Survival depends on being able to reach out to the missing faction, to convince them to come back, to help fight against the invaders while there’s still an Earth to call home.

I’ve been a fan of this kind of epic science fiction long enough to remember that the original Battlestar Galactica was released to the big screen as a major motion picture before it became a television show. Between that and then, of course, Star Wars, I was hooked. Hell, I was enough of a fan of the genre that I even found something to like in the slew of cheap knock offs that followed the success of Lucas’s masterpiece… Okay, maybe not StarCrash. Even I was able to recognize that movie for the unholy mess that it was. Still, there was a lot to like in the genre as a whole, and to this day I do my best to give credit in the attempt.

So I’m here to say that there is a lot to like in Exilium, an opening salvo in what can hopefully grow into a solid entry in the space opera genre. A labor of love from the mind of Ben Slabek, Exilium boasts a cast of characters with great potential for growth. The central resistance team of alien Tr’u, and humans Ken and Nia, the leader, has a sense of history about them. They’re friends who’ve known each other long enough to make jokes about their respective heritages (it’ll be a sad day if Ken ever pronounces Tr’u’s name right… hint, it isn’t “Tru”). There’s some really good dialogue among them, complete with mocking nods at some of our very own science fiction- apparently, Tr’u is a huge fan of the movie Independence Day, despite its horrible notion of an alien computer system being susceptible to, much less compatible with, an ordinary computer virus. Slabek does a good job of infusing his characters with personality and likeability, and that goes a long way toward easing some of the jumps in the narrative. There are a few odd breaks in the dialogue that were maybe meant to split a scene’s perspective or give the story a fast-forward, but wound up causing some confusion as these instances interrupted the pace of the book. I’d like to see Slabek keep his momentum going long enough to catch his stride, to hold onto that sweet spot in his narrative that does make the story work, because what works in Exilium works very well.

Another thing that works is the art from Salomon Farias. His character designs were part of what inspired Slabek to take his concept and flesh it out into a full series, and his style could lend itself very well to the dynamic action required for this kind of “Red Dawn” story. Again, and I hate to bring any kind of critical opinion to the table, there are some breaks in the flow from one panel to the next. As some of the scenes switched, it was tough to follow the perspective as there wasn’t enough to distinguish one setting from the next, either in color scheme or panel layout. Reading the issue again, I wondered if it was a simple matter of communication between writer and artist, the distance between them as they put their otherwise solid book together.

Look, I’m not entirely comfortable in the role of “critic”. I’m a guy who never grew up enough to want to stop reading comic books, who still loves the medium enough to want to talk about the stuff I like. I don’t want to be the guy who puts down the work that someone else has done, pointing out everything wrong with something they’ve worked at and put out into the world. I hemmed and hawed about writing this article just because of what I felt were critiques in the storytelling of a book that honestly was pretty damn good.

The bottom line, I like the world of Exilium. I like it quite a bit, and I think that there’s more than enough going for it to make it deserving of notice. For crying out loud, it’s got an alien talking with an Australian accent, playing Cricket and wearing a jersey that says “Will run for beer”. It is a new comic, and while it isn’t perfect (what is?) it is one that I hope can catch a favorable wind long enough for the creative team to find its collective voice and really take off. 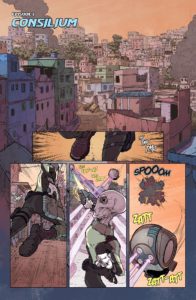 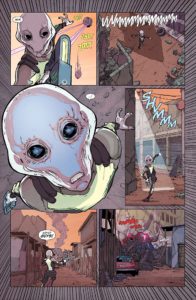 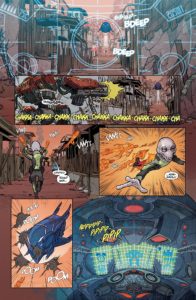