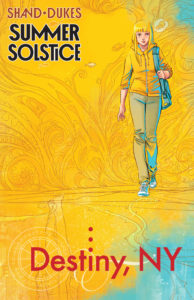 Destiny, NY, the ongoing graphic novel series created by Pat Shand & Manuel Preitano about a world where magic is a real and accepted part of life, has launched a spinoff webcomic. Destiny, NY: The Space Between, a seasonal webcomic telling standalone stories focusing on the supporting cast of the series, launches its first episode today, Summer Solstice. Written by creator Pat Shand and illustrated by Rachel Dukes (Frankie Comics, Steven Universe), Summer Solstice is a feel-good and comedic story about former magical girl Logan McBride moving in with her temperamental girlfriend Lilith, and the storm of craziness that follows.

Shand says, “With this webcomic, our aim is to broaden the universe of Destiny, NY. We introduced a wide variety of characters with our first volume, so this seasonal webcomic is a way to have fun in that world, telling stories that don’t necessarily fit in the ongoing narrative. We’re starting with a romance, but our next episode could be a dark crime thriller. Anything goes.”

Destiny, NY: The Space Between will feature a different artist for each episode. The first episode, Summer Solstice, can be read for free on Tapas: https://tapas.io/episode/734387

Destiny, NY Volume One can be purchased on Amazon: https://www.amazon.com/Destiny-NY-Who-Used-Be/dp/0998658502 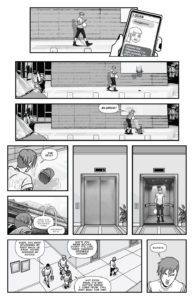 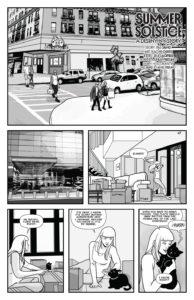