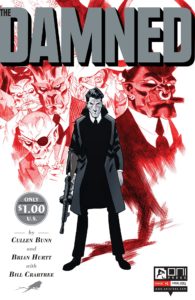 The Damned #1
Oni Press
Written by Cullen Bunn
Illustrated by Brian Hurtt
Colored by Bill Crabtree
Lettered by Crank!
Available on May 3, 2017!

Ill-Gotten Part 1
In a Prohibition-era world where demonic princes pull the strings that make crime families dance, Eddie is a mortal with two things working for him. First of all, he can’t die. Well, he can and does, quite often, but he doesn’t stay down for long. Second, Eddie runs the Gehenna Room, a nightclub with a strict “no demons allowed” policy. But blessings and curses don’t look all that different these days, and failing to tell the two apart can get a guy killed–over and over again in Eddie’s case. So when one of Eddie’s old pals shows up seeking sanctuary, Eddie knows he’s in for a double-cross, and that means walking the line between salvation and damnation once more.
———-

Running the Gehenna Room is no picnic. Once the recreational stomping grounds of the demons of the underworld, Eddie has instituted some changes since he’s taken over management (for details on that series of unfortunate events, make sure you read Oni’s preceding limited series- thePullbox review here). First and foremost, Eddie has declared the Gehenna Room off limits to the demonic community, no exceptions. This rule is put to the test when a horned group of heavies working for Bruno Rourke (that’s right, a demon named Bruno) show up, looking for a “few laughs”. Eddie sees through the claim, figuring whatever they were looking for, it’s all business and has nothing to do with a good time. He turns them away, and soon discovers that his instincts were spot on when an old acquaintance named Pauly Bones shows up. Pauly is calling in a favor, looking to lay low for a few days and leaving Eddie to deal with the sure knowledge that nothing good is going to come of a renewed association with his “old friend”.

From the creative team that brought the weird west saga of the Sixth Gun to the page, The Damned brings that same blend of something old and familiar, mixed with something twisted and strange. Instead of the Old West, Bunn, Hurtt, and Crabtree have now turned their attention to the age of Prohibition. Historically, the general populace lived under the shadow of gang violence. At any time, gunfire could erupt in the streets, and innocent bystanders had to scramble to get out of the way. However in this particularly inspired piece of alternate history, the gangs aren’t run by ordinary gangsters out to make a buck, but by actual demons dealing in human souls.

Hi-jinks, violence, and the blackest of black magiks ensue.

I’m gonna be honest, at this point I think I’d read the phone book from cover to cover if I found out that Bunn was writing it. His spin on familiar themes and genres has yet to disappoint. Then if I were to discover that Hurtt was maybe throwing in a doodle here and there in place of advertising, there’d be no doubt about it… the yellow pages would never be the same again. In combination, Cullen Bunn and Brian Hurtt bring style and substance to their work, and it’ll be interesting to see what era they decide to take on when their run with The Damned is over with.

Lest I forget to put credit where it’s due, Bill Crabtree’s work on the colors for The Damned adds more than just a touch of pigment to the book. The washed out looking palette plays tricks on the reader, at times almost seeming to fade to black and white. The only brightly rendered color in the book is the stark red of blood- like, say hypothetically when poor Eddie is running through the streets, his throat opened up like a pig led to slaughter. The effect works out well in that it sort of hails back to watching old gangster movies, which were in black and white and seemed to be a major influence on the tone of The Damned. The faded style also makes sure that the splashes of red blood really stand out in stark contrast, drawing the reader’s attention the spurting results of violent action.

All together, The Damned is high up there on my list of prospective new series to keep an eye on. Fans of urban fantasy, stories of Tommy gun wielding gangsters, or soul sucking fiends from the pits of Hell should all be able to get into this new ongoing series. With a $.99 price tag, digitally and in print, you can’t really go wrong… That’s, what, a quarter cup of coffee at Starbucks? 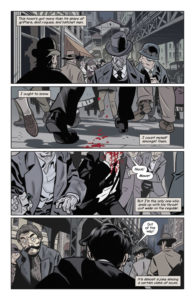 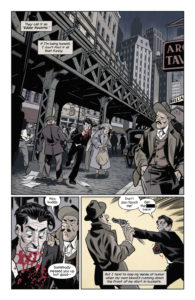 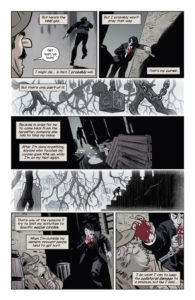 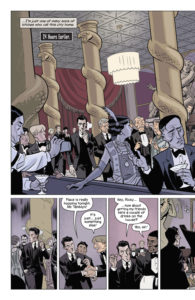 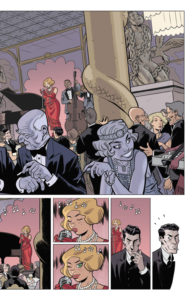 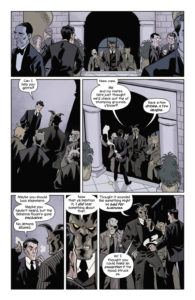 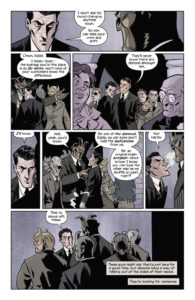 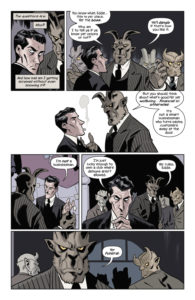