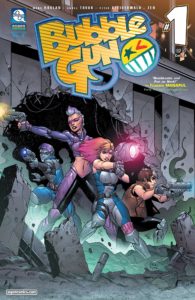 The BubbleGun crew return for more high stakes jobs! Since the team rescued the group’s newest member, the cyber boy Asher, from the corporate megalomaniac, Drazic, their world has been in constant turmoil! Devyn and Molli find their bandit crew forced to do the bidding of an underworld gangster, Sir Penny, after borrowing and destroying his favorite ship, The Dark Lightning. Yet, even if they survive Sir Penny’s harrowing missions–how will they escape the clutches of a ruthless gangster plotting to kidnap Asher?! Creator and writer Mark Roslan (Broken Pieces) is joined by penciler Angel Tovar () and colorist Erick Arciniega () on what’s sure to become one of comics’ biggest sci-fi, action adventure series of the summer! Strap yourselves in because BUBBLEGUN is gonna take you on a wild ride!
———-

After a job gone bad, sisters Devyn and Molli find themselves in a bit of a pickle. Having “borrowed”, and then consequently wrecked, a ship belonging to gangster boss Sir Penny, they find themselves indebted to the underworld drug trafficker. Now the sisters and their crew are forced into jobs they don’t want in order to pay off the debt. The trap becomes apparent when the crew realizes that the jobs Sir Penny is handing them are next to impossible and almost sure to end in their untimely demise.

Movies like Bladerunner and books like Neuromancer by William Gibson really set the tone for cyberpunk as a genre. There’s never any lack of gloom and angst to act as the counterpoint to the shiny neon and chrome of the setting, which is further identified by the generally oppressive atmosphere of life under the umbrella of omnipotent megacorps, and the razor’s edge lifestyle of those hackers and runners determined to go against them. There’s nothing at all wrong with any of that, but all but the most diehard cyberpunk fans should be willing to admit that at some point you just have to lighten things up a little (or sign up for some therapy, maybe?).

Enter BubbleGun and its crew of merry misfits. Older sister Devyn is more or less the brains of the outfit, with the younger Molli taking up the duties of seat-of-the-pants wild child. Their hotshot pilot Kyo spends his time trying to figure out how to get his romantic interest in the high spirited Molli to mesh with his own inner demons and shadowy past. The most recent addition to the crew, Asher, is both the most and least cyberpunk member… he’s a full cyborg capable of interfacing equally with computer networks and human beings, but his childlike innocence wouldn’t last long on the mean streets of most cyberpunk tales. The overall theme here walks the fine line between a story that’s just plain fun, and the darker roots of the genre it seems to have spun off from.

I may not know art, but I know what I like.

Mark Roslan has gifted his characters with a refreshing optimism to counter the seriousness of their situation: Sir Penny obviously wants them either under his thumb or out of the picture completely. Why that is exactly remains to be seen, but with ambitions to corner the drug trade by hacking addiction on a genetic level could be something that the more altruistic crew of Devyn, Molli and company might take exception to. Roslan’s use of dialogue and snappy banter is only very occasionally over the top or “on the nose”, and generally speaking his humor is sharp and finds a way to sneak up you. I’ll own up to a few good laugh-out-loud moments.

BubbleGun’s break from cyberpunk norms is further highlighted by the very bright and cheery artistic style of Angel Tovar, and the work of Peter Steigerwald & Federico Blee on colors. There’s not a speck of grit or grime to be found, no dreary scenes of rain soaked gutters or gloomy back room cyber deals. Tovar imbues his characters with the ability to be bright and cheery almost to a fault. If there was one tick I had, it would be that there were a few points where a big smile didn’t quite fit the situation. That’s a pretty minor thing, but it did take away some impact where it seemed like there should have been more tension. All in all, though, I was really enjoying the action as Tovar portrayed it. He draws his characters to express their joy in their activities. I got the impression that where Devyn is the serious tactician, Molli is more of the adrenaline junkie who’s having the most fun when the danger is in the red zone.

I’m a late comer to the BubbleGun adventures, having missed out on volume one of the series, but despite the backstory gaps this is still a pretty cool book that’s putting the “fun” back in “crime”. 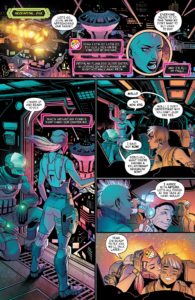 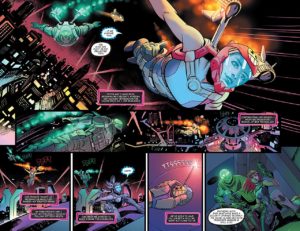 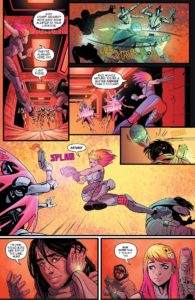