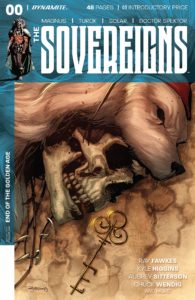 The beginning of an epic tale that will change everything you know about some of comicdom’s greatest and longest-tenured heroes! Solar, Magnus, Dr. Spektor & Turok! Apart, they’ve saved countless lives a hundred times over. Together, they form a team that has protected the world in the past, present and future. Now, they will be reunited one last time to face a threat that will forever change their legacy and bring them face to face with their final destiny!

A battered old figure stumbles across the landscape. He’s traveled far and suffered much, but his determination carries him forward. The Mighty Samson has been given a task, and he’ll see it out no matter what stands against him. All around, he can see that the world is taking its last breath, but if he can reach his destination there’s a chance that he can save it.

It’s a day to celebrate as people gather to cheer for their King on the anniversary of his coronation. Everyone pushes forward to catch a better look of him as the imposing, scarred figure of King Turok steps out to greet them. The festivities move on as emissaries from Turok’s friends and allies step up to offer greetings and congratulations from the likes of Magnus, the Robot Messiah; Grandmaster Spektor, the most powerful mystic to ever walk the Earth; and Solar the Savior, forever orbiting the planet as he radiates energy and light for all.

While all of this carries on around him, Turok isn’t happy. His brother Andar knows that the King’s dreams have been less than pleasant lately, as he hears him crying out in the middle of the night, and he tries to reassure Turok that the dreams are only remnants of the countless battles he’s fought to reach his lofty goals. For his part, Turok tries to accept the encouragement, but the looming shadow that his dreams have shown him, slowly descending to envelope his kingdom in death and decay, has too strong a hold on him. When the celebration of Turok’s victory is interrupted by that very shadow and the feeling of sickness and despair that emanates from it as it hovers on the horizon, he knows that this is what his dreams have been warning him about…

“So began the end of the Golden Age of the World.”

I remember reading the Gold Key adventures of Turok: Son of Stone, Magnus: Robot Fighter, and Solar: Man of the Atom. As a kid, they were some of the coolest comics being printed, looking nothing at all like anything coming out of DC or Marvel. As the longevity of the characters can attest to, that coolness carries on as they’ve moved from Gold Key to Valiant, and now on to Dynamite Entertainment. This series looks like it’s kicking off with a slightly different direction as it starts with the End of the World… As is shown in the short introductory vignettes at the end of the issue’s main story, characters and situations have changed a bit. Seeing as some of these people have been around since the mid-fifties, I’m interested to see what plans Dynamite has to shake things up a little bit.

As for The Sovereigns, we’re given a glimpse into a post-post-apocalyptic world as an elderly Samson is on a mission, the last mission, to try and reverse the End of Days. When the story jumps us back 500 years, we see that this particular global doom isn’t going to be won or lost over the course of a single battle. An aged and battle-scarred King Turok is the first to engage the shadow that threatens his kingdom, but we’re never really shown what the nature of this enemy is. From what I’ve seen so far, it doesn’t really look like anything that’s going to be beaten down by any physical weapon. That’s held up by the 500 year jump in the story. What happens to Turok and his people is something that’s yet to be revealed.

Sovereign’s creative team of Ray Fawkes, Johnny Desjardins, and Mohan have done a pretty good job of introducing a world built up on the remains of the old. Turok’s kingdom is a primitive paradise of warriors mounted on tamed dinosaurs that look kinda like a cross between velociraptors and tyrannosaurs, traveling among the bare bones of cities reclaimed by the wild. There’s tension built into the story as readers are left to wonder what happened to bring the familiar characters to their present positions of power. Being bounced back and forth over a 500 year time span, seeing an old and battered Samson as he approaches Turok’s shadowy enemy adds to that tension… If Samson is fighting the Big Bad 500 years later, that fight couldn’t have gone very well for Turok and company.

The re-imagined characters, familiar for all of the changes that have been made, are introduced in their short previews at the end of the book. Things are looking a little different for everyone, and we’ll have to see how the new stories roll out. 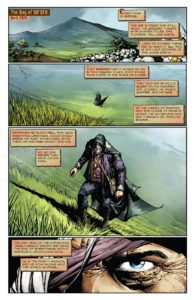 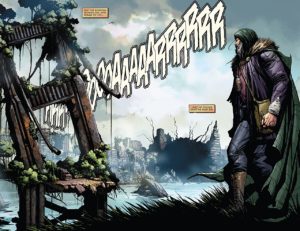 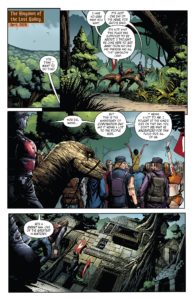 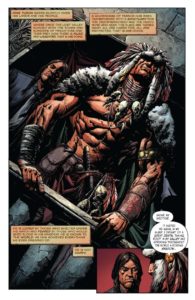 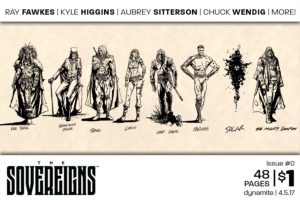