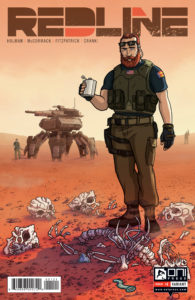 MARS. The near future-ish. A bomb takes out a city block on Harrison Station. The media rush to blame the local terrestrials (re: aliens,) however Superintendent Denton Coyle has a feeling that it may not be so simple… or maybe that feeling is Coyle’s hangover gut bomb. It’s unclear… like a 50/50 shot, it’s a mistake or explosive diarrhea. Maybe it’s both? In other words, it’s yet another Tuesday on Mars.
———-

Life on Mars is anything but laid back. Vantage Solutions, the reigning corporate power on the red planet, is working to secure their mining colonies, but they’re definitely not doing it without opposition. After years of wondering, we learned that there is life on Mars, and they really weren’t okay with visitors coming along and making themselves at home for the sake of corporate interests. With military support, Vantage continues their colonization efforts, and an uneasy cease-fire with the “Martians” is in effect.

But there’s a very important difference between “cease-fire” and “peace”. It falls on Superintendent Coyle, the ranking officer among the Vantage Solutions security personnel, to keep everyone in line and organized to deal with the ever present threat of guerilla war tactics.

Over the years, there’s been a multitude of stories featuring the possibilities to be found in outer space, and eventually we might get there some day. With all of those stories out there, the biggest hurdle for a new comic series is going to be standing apart from the herd. Many don’t. The ones that do are those that find one thing, whether it be in the art, the use of “realistic” technology, or the overall tone of the story. Whatever it is, there has to be something to stand out. Redline doesn’t bog itself down in too much technical detail, and it isn’t particularly worried about creating a story around an established detailed backstory. We’ve colonized Mars, it has a breathable atmosphere, and we’re having trouble with the locals. Done, now let’s move on.

For my taste, what Redline has done better than most is in the writing. Specifically, the dialogue. More specific than that, I really got into the chatter between the military personnel. I have no idea of these people are actual military (the Marines are mentioned, so points there), or if they’re private security contractors working for Vantage Solutions… When it comes down to it that really doesn’t matter because most civilian security contractors at the higher levels are going to be former military anyway. What mattered to me was that writer Neal Holman (art director/producer who’s worked on Archer, Frisky Dingo, & Sealab 2021) is either a veteran himself, or he took a lot of time speaking with veterans, because the way these people talked to each other was poetry. Vulgar, foul-mouthed, obscene poetry. Speaking as a veteran, Holman’s dialogue in Redline had me feeling all nostalgic for the days when I could judge my standing among my peers by how much verbal abuse came my way. Kudos to you, Neal.

I’m not saying that the artwork produced by Clayton McCormack & Kelly Fitzpatrick is anything short of awesome, either. They’ve created a landscape and atmosphere that would be recognized by anyone who’s seen footage from Kandahar. The desolate and rocky terrain is more familiar than alien, giving us an obvious parallel to draw between this comic and a certain lengthy military action still in progress here on Earth. The threats are ever present, but don’t present themselves in the form of massive attacks coming up over the hill at dawn. Rather, the Martian locals have adopted hit and run tactics involving IED’s (Improvised Explosive Devices), setting off their explosives from a distance using spotters to maximize casualties among both the security forces and the civilian colonists, and then fading back into the rocky terrain. And so far, the hostile aliens have been left mostly in the shadows, glimpsed but never really revealed in their entirety, creating more of a mystique, and reflecting the reality of fighting a defensive battle against guerilla tactics.

Before you wonder what the point of the whole thing is or asking what benefit there might be in reading Redline beyond the stated highpoints, without giving too much away I can say that there is an apparent plot twist in the air… Either that, or I’ve read too many of these books and I’m seeing conspiracies behind every rock.

Whichever way it plays out, Redline #1 is a well scripted, well-drawn introduction to what I hope will be a great series from Oni Press. Having read some of their other titles, I don’t really see them putting out a flat, two-dimensional story. Honest, if it were all dick jokes and f-bombs, even I wouldn’t have been able to get through the issue…

Now, here’s some preview pages for your reading pleasure, compliments of Oni… Be warned, they don’t take too long before the F-bombs start flying. Children, look away! 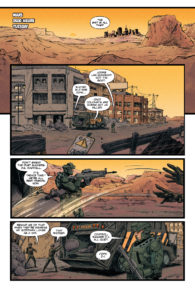 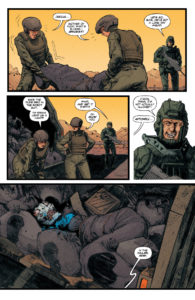 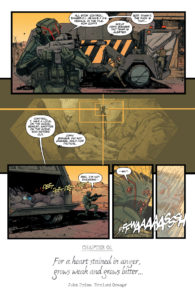 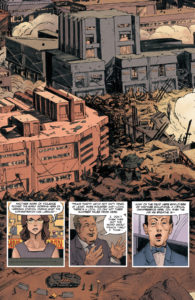 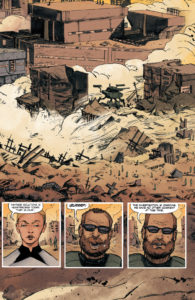 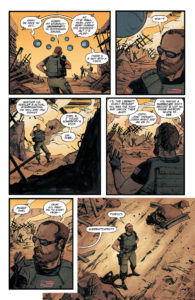 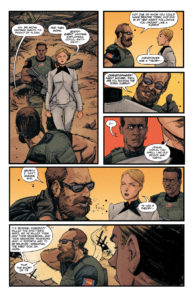 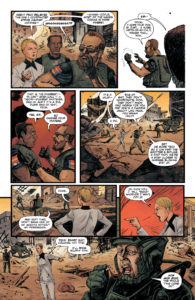 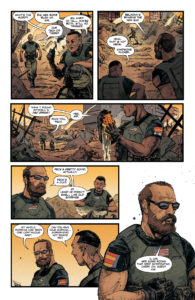