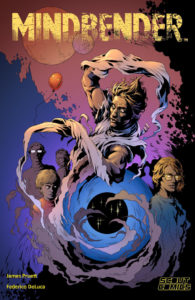 Alex was only 7 when he first awakened the power that left him comatose for nearly 16 years, an evolutionary power lying dormant in all mankind, bubbling within the unconscious mind waiting and yearning to be unleashed.

Finally, a young child was able to touch this untapped force and the results were catastrophic.

Those that would use his ability have been awaiting Alex’s awakening. Now, that wait has ended, and the world will soon learn the true potential of mankind. But will Alex be a vanguard for the world or will he be responsible for its annihilation?
———-

On a clear September day in the year 2000, the Obermans are enjoying a day at the carnival, however things turn grim when seven year old Alex trips and loses his grip on his balloon. In what’s regarded as a tragic accident, Alex’s parents are reduced to piles of smoldering ash. The official record attributes the event to exploding propane tanks, which inexplicably leave young Alex completely untouched. Traumatized, the only thing Alex says about what happened is, “I did this.”

Fast forward to the year 2017, and Alexander Oberman is a resident of the Branch Institute in Exton, Pennsylvania. He hasn’t spoken a word since the deaths of his parents, and has become the pet project of the Institute’s Doctor Tramontano. When new case worker, Ms. Amos, is hired on to work with the various patients of the Branch Institute, she takes an interest in Alex’s case. Despite all indications suggesting he could very well never recover from his catatonic state, she believes that she could be the one to make her way through the barriers of Alex’s damaged psyche.

From independent publisher Scout Comics, we have something a little different. James Pruett has crafted a pretty dark story that begins with the most traumatic event a child could experience, being witness to the violent and horrific deaths of his parents. After the seventeen year jump, we’re introduced to some of the staff and patients of the Branch Institute. While some of the characters do fit neatly into stereotypical roles, including the overbearing and arrogant lead psychiatrist, the happy go lucky patient who believes he’s Elvis, and the thuggish bullies who managed to get hired on as orderlies, the presentation of them all is handled pretty well and they all do their jobs. The focus is, of course, on Alex, as well as the tragically lacking a given name Ms. Amos (it seems like a small thing, but as a POV character it seemed strange that we couldn’t even refer to her on a first name basis).

Adding to the dark and foreboding tone of the book, the art by Federico de Luca is all muted colors and stark shadows. His work does a great job of pointing the reader to the characters who matter at any given time. Individuals relegated to the status of background props (sorry, nameless security dude) are left in shadows without much in the way of distinguishing features, while the people we’re supposed to be paying attention to are rendered in sharp detail. What most stood out to me were the eyes… when we were treated to a close up, particularly in the example of the extremely unlikeable Dr. Tramontano, the eyes gave an almost unsettling effect. I wasn’t sure if it was a deliberate technique, used specifically to ensure that we hated the Doctor, or if it was just a matter of the close up detail lending the eyes a disturbing doll-like quality. In the end, it really didn’t matter as far as I was concerned because Dr. Tramontano really is kind of an ass and I didn’t particularly feel like spending much time on him anyway.

As the story progresses, we’re inevitably reintroduced to Alex Oberman, who has a few secret truths to be discovered. By the end of the first issue in this trippy series, we’re left with a few mysteries to ponder while we wait for the next: Who is the homeless guy, and what’s his connection to Alex and his condition? Is “Elvis Smith” really the reincarnation of The King? Why is Dr. Tramontano such an insufferable ass? And last but not least, what the hell is Ms. Amos’s first name?

The tone of the book is a tense meta-physical head trip that utilizes its writing and artwork in combination to create an almost unsettling, but more or less expected, series of events. Where the series goes from here will determine whether or not it will hold onto the attention it gets from its opening issue. Based on the groundwork laid out here, Mindbender is very much deserving of a look from readers interested in something outside of the normal comic book subject matter. The release date is a ways off yet, coming out in May of this year, but there are some very cool tidbits that come along with it… One that has me a little excited is the idea of a cover done by Phillip Hester, the artist who kicked of the Green Arrow: Rebirth run for DC.

Keep an eye out for this one…