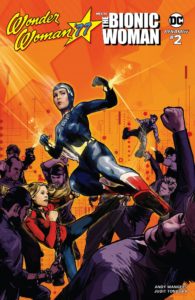 Bullets & Bracelets & Bionics! The dream team that no one thought was even possible is now reeling after the events of the debut issue! Diana Prince (aka Wonder Woman) and Jaime Sommers (The Bionic Woman) must join forces to find out who laid waste at the IADC headquarters, without the help of a powerful ally. Meanwhile, the evil cabal CASTRA continues its evil plans, and not one, not two, but three familiar villains are revealed! But while Wonder Woman and the Bionic Woman engage in a battle at sea, a jailbreak in Washington, D.C. leads to another shocking returnee…with a very deadly agenda!

The shadowy organization known only as CASTRA continues to further its plots, while members of the OSI and IADC mourn the loss of a friend. Joe Atkinson, killed when CASTRA bombed the IADC building, has accumulated more than his share of allies, including OSI head Oscar Goldman. Along with Oscar, the attendees of Atkinson’s Shiva include Steve Trevor, Diana Prince, and Jaime Sommers. When Wonder Woman shows up to pay her respects (after Diana makes a timely visit to the restroom), she and Jaime solidify a growing friendship between kindred spirits. Their shared secrets have formed a bond, and the looming threat of CASTRA has given them more than enough reason to join forces.

Much of this second issue revolves around developing the bond between Jaime and Diana, giving them a little more “get to know you” time. Meanwhile the bad guys have stayed busy as they gather their forces. After bombing the headquarters of the IADC, raiding their computer database, and lifting experimental missiles from an armored convoy… because it just wouldn’t be an evil plot for world domination if there weren’t experimental weapons of mass destruction… their next step is to smuggle the missiles out of the country. With air and land routes covered, and some suspicious shenanigans down at the shipyard, the Bionic Woman and Wonder Woman head down to the harbor. Cue wardrobe change for the perfect opportunity to feature the Wonder Wetsuit.

If this crossover series was nothing but a nostalgia driven puffpiece, I’d be on board. The fact that its nods to two of my favorite childhood TV shows are buoyed up by some really solid artwork from Judit Tondora is just icing. She’s nailed everything that could be expected in a story set in the seventies, from the feathered hair to the cheesy mustaches, and her work on Diana/Wonder Woman in particular is outstanding. Capturing the smile of Lynda Carter can’t be an easy task, but Tondora reminded me of why she was one of my first crushes as a kid. Um, Lynda Carter, I mean… not Judit Tondora.

For that matter, the writing does a great job of bringing back memories. If anyone were to voice a problem with some of the cornier dialogue, I’d have to wonder how much time they spent actually watching 70’s television. There are all of the banter and one-liners you could expect, and then some, but Andy Mangels doesn’t stop there. That’d be too easy. He manages to work in some pretty solid dialogue between Jaime and Diana, most notably as Jaime tries to wrap her head around how Wonder Woman’s secret identity actually fools anyone.

By now you’ve gotta be wondering if we’re ever going to see anyone else from the old TV shows. I mean, our two heroines are great and all, but what’s an evil organization without some really classic evil-doers? Am I right? Don’t worry, DC and Dynamite have you covered. Without giving anything away, I can reassure the discerning readers out there that there should be more than enough classic bad guys for your taste, and they start showing up in this issue.

So gather ‘round, nostalgia buffs and fans of crossovers that break publisher lines… From the people who bring you Batman ’66, the Green Hornet, and all things Bionic, here’s another reverent nod to all things pre-cable television. 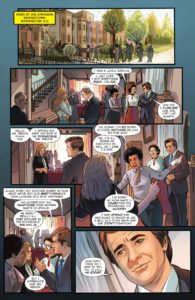 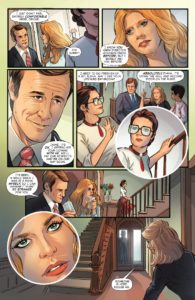 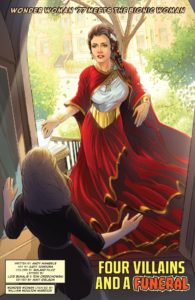 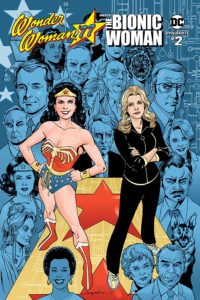