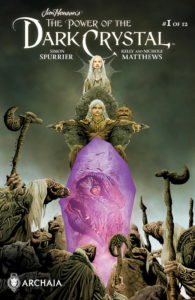 In celebration of the 35th anniversary of Jim Henson’s The Dark Crystal, return to the world of Thra in an official sequel to the beloved fantasy film. Discover an all-new race of creatures called Firelings that live in a realm near the planet’s core, based on official character designs by Brian Froud. Years have passed since the events of the original film, and though Jen and Kira have ruled Thra as King and Queen, bringing Gelfling back to the land, they have become distracted by power and can no longer feel or see the needs of the world the way they once did. Thurma is a young Fireling tasked with stealing a shard of the Dark Crystal to restore power to her realm. Along the way she’ll befriend the young Gelfling Kensho, bring back the Skeksis and Mystics, and embark on one incredible adventure.
———-

For thousands of years, the world of Thra was a dark and barren place. The broken Crystal of Light had become a thing of darkness, its power horded by the twisted Skeksis. At the height of their rule, however, the Skeksis were brought down by the courage of two young Gelflings. The Crystal’s missing piece was replaced and the Crystal itself was returned to its former glory and power.

For one hundred years, the world of Thra prospered. The heroes, Lord Jen and Lady Kira, slept peacefully as pilgrims continued to make their way to see the Crystal, to be healed in its light. In return for their access, the Gelfling clan leaders’ demand for offerings increased until now only the wealthy, or those desperate enough to give up all they have, can take part in the healing ceremony. All the while, the light of the Crystal has begun to falter.

For one hundred years, the ancient sage Aughra has kept her watch over Thra. Nothing escaped her gaze as she took in the secrets of the stars and interpreted their message. Now, Aughra has seen that something new has come to the world- a visitor from deep inside Thra itself. This visitor is a Fireling, and she’s come to ask for the unthinkable. Her people are dying, their light fading, and there is only one thing that can rekindle the fire they depend on to survive.

I was just a young’un when The Dark Crystal came out in theaters in 1982, and I think it would be safe to say that no one at the time had seen anything like it. Without the benefit of modern special effects like CGI, Jim Henson, Frank Oz, and their crew of puppeteers created something special, born from the concept art of Brian Froud. While the reviews for the film itself might have been mixed, there was no denying that the animatronic special effects on display were a feat of creative engineering. Thanks to Boom! Studios and the work of Simon Spurrier, and Kelly & Nichole Matthews, the story begun in The Dark Crystal continues.

Simon Spurrier’s writing pretty well captures the tone of an epic fantasy world, building on the foundation set down by Henson, Oz, and company. Where they may have been limited by time and budget, however, Spurrier has broadened the scope of the world of Thra, and introduced layers the movie couldn’t touch on. For example, we find the Gelfling clans, all but wiped out by the Skeksis, at the peak of their power and influence thanks to the noble heroes Jen and Kyro. Sadly, they seem to be as susceptible to greed and corruption, as ruthless in the acquisition of wealth and power, and as unwilling to give any of it up as any character from a George R. R. Martin book. The other added element of the Firelings and their world, deep in the heart of Thra itself, is a testament to what can happen when a world like that of The Dark Crystal is left open for exploration and given the opportunity to grow.

And what a world it is… The artwork laid out by Kelly and Nichole Matthews is absolutely worthy of what came before. Through flashbacks, they’re able to show the contrast between the dark and gritty world of the movie with the bright and sunny world Thra has become under the influence of the restored Crystal of Light. Their character designs build on what Henson and company created, adding depth and culture to the Gelflings that we’d never seen before. Given that Henson’s original work was based on what visions they could conceivably bring to life for a movie, the chance to see that world built up in the visual medium of comics is pretty cool. I’m looking forward to seeing what these two artists can accomplish as the story progresses, and no doubt some darkness is reintroduced. Could we see the return of the Skeksis? Hmmm?

The Dark Crystal was a visionary accomplishment, testament to what could be accomplished by talented folk willing to take a risk. While the movie might not have produced the immediate returns a studio would be looking for, seeing the story honored and continued in comic book form thirty-four years later should be proof that their creation hit a mark.

Hope Jim’s paying attention… Hat’s off to ya, buddy. This is what you started. 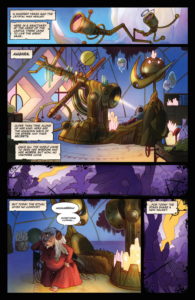 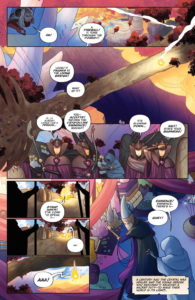 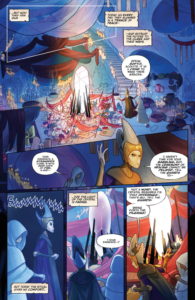 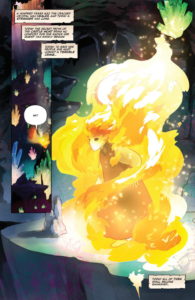 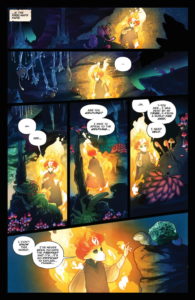 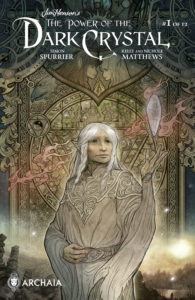 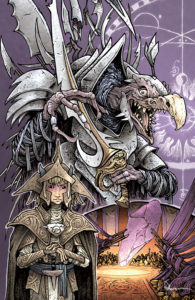 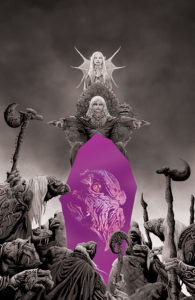