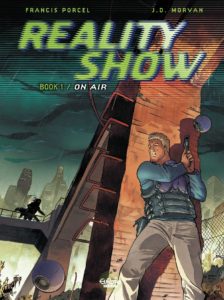 In a future age where robots take care of most of the more tedious tasks, humans have a lot of time on their hands. So what to do with it? Well, obviously, they’re going to watch the Norman K. Barron show! Norman is a handsome and heroic policeman, whose dealings have already cost the life of his partner, who has now been replaced by Oshi Feal, a young recruit fresh out of police school. But nothing could have prepared Oshi for this kind of mission, where unexpected developments are a must… After all, you gotta keep the viewers happy!
———-

Baron and Sheeta, buddy cops and the stars of the highest rated reality show in the world have run into a perp like no other. A serial killer who flays his victims and removes their vertebrae with surgical precision, he’s been active all over Europe for nearly a year. Now in South America, he’s found himself in the spotlight and pursued by two of the best in the business. Cornered, with Baron and Sheeta closing in, this dirtbag doesn’t stand a chance!

Or does he? In an instant, Detective Sheeta is murdered, live for all of his loyal viewers to see. Displaying superhuman strength and agility, the killer escapes justice and Baron is left grieving for the camera feed. The tragic and highly-rated death leaves entertainment powerhouse MediaCop looking for someone to take Sheeta’s place as Baron’s new partner. Of course, not just anyone will do… the job can only go to the most qualified law enforcement officer, the one most dedicated to truth, justice, and the perfect one-liner. It ain’t gonna hurt if they also happen to be photogenic.

Enter academy cadet Oshi Feal. She’s about to graduate at the top of her class, and is destined for great things behind the scenes as an ordinary publicly employed police officer. Until, that is, she’s noticed by Norman Baron’s MediaCop agent. Now she’s ready to step into the fray as Baron’s latest partner, so long as she can uphold the terms and conditions of her non-disclosure agreement.

Who doesn’t love reality television? Okay, well I’m not really a huge fan, but then again we don’t have anything at all like this. For a hefty subscription fee, viewers are able to tune in their VR headsets to watch the ongoing adventures of Captain Norman Baron and whoever his partner is at any given time. For a slightly less intimidating price, viewers can subscribe to his partner’s feed and be treated to an only slightly diminished dose of Baron’s adventures, just from a different camera angle. Being new to the whole celebrity thing, Oshi is overwhelmed by the fact that she’s going to be working in close contact with her reality show hero. Before too long, however, it starts to come clear that everything she’d seen through her VR feed isn’t the whole story. After all, you can’t let things like reality get in the way of the ratings, even on reality television.

The cynicism splashed across every page, along with gratuitous amounts of sex and violence (hello… ratings!), was what really made this a really entertaining read. The contrast between “reality” and “reality television” isn’t one that many people grasp, and that’s the point that writer J. D. Morvan seemed to want to get across. That isn’t saying that perfectly coiffed supercop Norman Baron is your typical paper hero. Granted, he is very good at his job- cop or entertainer, pick one- but he’s also a guy who, as the story goes on, starts to show the wear and tear involved in keeping up appearances. For that matter, Oshi is perfectly placed as the bright and sunny optimist who has to cope with the grimy truth. We’ll see how long she can hold onto her outlook when faced with the hard and cold facts she never got to see when she was merely a viewer. Neither of our main protagonists remain one dimensional stereotypes for long, and that’s what makes this, a book that started out as eye-candy, really jump ahead in my opinion.

Speaking of eye-candy, the artwork put in by the team of Porcel and Hubert does a great job of taking Morvan’s story and cranking it up to 11. The action is laid out to portray the dynamic movements involved when things get moving, and the character designs are steady and on the mark throughout the book. Baron looks like the quintessential action movie hero, all blonde haired and square jawed, while Oshi brings an almost manga schoolgirl quality that evolves into the perfect sidekick stereotype. Think Robin to Baron’s Batman, only with a little more chance of a hookup down the road.

Absolutely not for kids, with heavy doses of graphic sex and violence throughout, Reality Show is a great example of what comics can do when the gloves are off. It has aspects of multiple genres, ranging from sci fi action to cyberpunk, and should appeal to different palettes. If you’re looking for a deeper story to go with your buddy cop drama, there are multiple layers to be explored. If it’s just action, action, action you want, there should be plenty of that to see, awesomely scripted and drawn.

Oh yeah, and there’s still that pesky serial killer out there… You don’t suppose he’s a major part of the plot, do you? Believe me, it was a little surprising to me that whenever he popped up in the book. It was almost like he was jumping up to remind me that he was still lurking around in the shadows while I was getting caught up in the whole play on the reality show tropes.

In the realm of independent comics, there are definitely layers and cliques. As a digital only title coming from a publisher I’d never really seen before, Reality Show is one that did not disappoint me in the least. 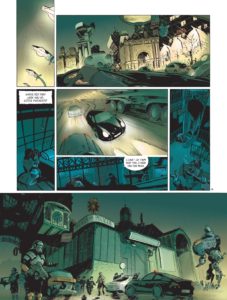 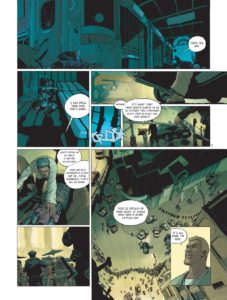 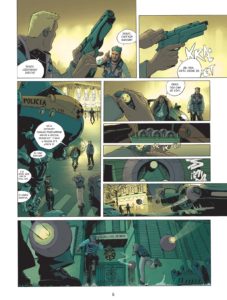