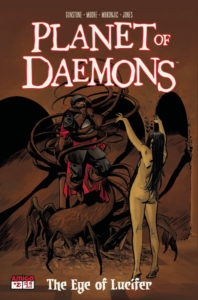 In the occult realm of the Qliphoth, the puritan magistrate Amos Deathridge serves as jailer of the Daemons who cast a sinister influence over the Earth. But entering Sathariel’s labyrinth, Amos encounters the hatching of a succubus Queen.
**********
After the death of his only companion, Templar Knight Baron Aubert, Amos Deathridge finds himself alone in a hostile place. Sathariel, the third planet of the Qliphoth, entraps lost souls is by no means a vacation spot, but Amos has made a choice. He holds the only key to a gateway between the hellish dimension and Earth, a key which can’t be destroyed or taken through that gate. Rather than leave the key behind for some deamon to find and use, Amos has chosen to stay as the key’s guardian, always on guard against attacks from the evil denizens of the Qliphoth.

In the last issue, Amos learned of the impending birth of a succubus queen, a witch of great power. Count Eligos, the Spirit of War, wants control of the succubus, and as it was Eligos who was responsible for the death of Aubert, Amos feels both a duty and personal motive to see that that doesn’t happen. Traveling to the Palace of Lilith, Amos finds the succubus right at the moment of her birth. At first he’s ready to kill her, to prevent her power from being used against the innocent, but as she calls out his name and begs for mercy, Amos is left with a dilemma. Who is this creature who names herself “Heinous”, and how does she know him? In an act of mercy that he’s sure he’ll regret sooner rather than later, Amos takes her under his protection as he continues on in his search for Count Eligos and his fortress.

Planet of Daemons works on a few different levels. First and foremost, it’s something almost completely different. Kevin Gunstone has taken Cabalistic lore to create a hell that’s not based in more the familiar Christian based concepts. It’s a different spin on a familiar idea- hero goes to hell and fights demons to guard the gate back to Earth- because in Gunstone’s world many of the daemons are human souls, twisted and perverted by their evil ways to the point where they’re unrecognizable as people. Things get even trickier on Sathariel (“Concealment of God”) where, as Amos points out is “where secrets are hidden”, and nothing can be taken at face value.

I’m also really digging the art by Paul Moore. It works out great for this type of subject, and brings up comparisons to some of the older comics like Prince Valiant and Flash Gordon. I don’t know if it would work as well in a more standard genre, but in this supernatural setting I think it does the job. Everything looks rough, almost gritty, and the character designs do a great job of reflecting the time period, right down to Amos’s bowl-cut. And since they are right there in the title, the daemons are often hideous, just human enough to make you draw that comparison, and at times they’re twisted enough to make that comparison a little uncomfortable. Even the more subtle things, like the flat black eyes of the Succubus Queen, do a great job of conveying their inhuman nature. To quote Jack Nicholson’s Joker (Batman- 1989), “I don’t know if it’s art, but I like it!”

Planet of Daemons is doing a great job, telling its story slowly enough to fan the flames, without dragging it out so much that I’ve lost interest (anyone else end up not caring what happened at the end of Lost?). We’re learning that as dedicated as he is, Amos might not be the infallible hand of God that he thought he was. We’re finding out that not all daemons have to be evil, sadistic, torturing monsters. What I’m looking forward to discovering is, who the hell (unintentional pun) is Heinous, and what is her relationship to Amos Deathridge?

If you have an interest in comics of a more supernatural bent, or maybe if you like horror stories with demons and devils, or if you’re like me and just appreciate it when a publisher lets their creative team do something that’s just plain different… I can think of way worse ideas than giving Planet of Daemons a try. 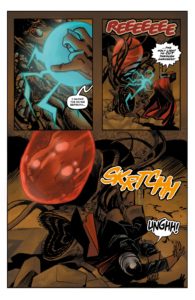 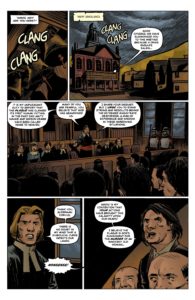 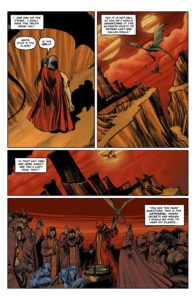