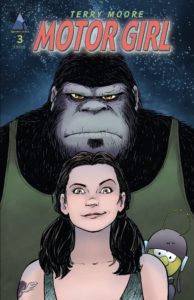 Sam has problems. UFO’s are keeping her up every night, dropping in for parts and coffee, and a suspicious Area 51 fanatic is determined to catch it all on video. To make matters worse, the bank wants to repossess the junkyard and build a casino. But Sam is determined to stop them, especially when she learns the junkyard is sacred ground! Don’t miss the latest issue of this very funny story by Eisner Award winner Terry Moore!
———-

Samantha, Sam to her friends (pretty much her boss Libby, and Mike her imaginary friend and six foot tall gorilla), has some issues. Issue three opens up with Sam in a doctor’s office looking to get some relief from her constant headaches. She also has a pair of ne’er-do-wells named Vic and Larry conspiring to kidnap her, in order to pressure Libby into selling her junkyard (“Libby’s Scrap”… yeah, I thought it was kinda funny too) to their boss, Mr. Walden. Lastly, there are the aliens in their flying saucers, but if we’re being honest here, even Sam isn’t totally convinced that she isn’t hallucinating those. Mike assures her the aliens are real, but is the word of an imaginary gorilla going to hold up?

Every now and then, I get my hands on a book that fires on every cylinder and hits pretty much every mark a comic book should shoot for (character, dialogue, humor, and artwork). These are the books that I read once, and then feel like I really have to read through them again just to make sure I didn’t miss anything. It may be pretty obvious by now, or else why would I even bring any of that up in this review, but Motor Girl is one of these books. Terry Moore, possibly best known for his long running and mostly self-published Strangers in Paradise, has created a, dare I say, beautiful story full of really cool people (and gorillas). Loaded with humor and mystery, Motor Girl also has more than a touch of the feels woven into its layers.

And boy, are there layers…

The first two issues of the series hinted at some pretty horrifying things in Sam’s past. She’s a former Marine, having served multiple tours of duty in Afghanistan. Of that time, it has been mentioned that she spent a substantial period of it as a prisoner. While nothing had previously been mentioned by way of detail, readers have been given glimpses of some pretty serious scarring on Sam’s back, and it’s been hinted at that Mike’s presence was a defensive mechanism to combat her treatment and isolation. Given Mike’s ferociously protective attitude toward Sam, it’s a fair bet that her captors were fortunate that he was, and is, only imaginary.

In this issue, during her time in the doctor’s office, we become privy to more of what happened during Sam’s captivity. Being held for ten months, she was beaten daily. As Sam explains, her captors focused mainly on her back, so as to leave her presentable for the cameras and not raise the ire of any NATO viewers. While she’s describing her circumstances, Moore imbues Sam with courage and dignity, and while we might be horrified at the idea of her torture, we can’t help but admire rather than pity her. The doctor, also a veteran, comments that her captivity, and subsequent release and recovery, must have been a terrible thing to have to go through alone. Sam reaches up to grasp the immense and furry hand on her shoulder and replies, “I was never alone.”

It’s an intense and perfectly scripted scene that shows Sam, and Mike, to be two solid and thoroughly thought out characters. These are just two people (okay, one person and an ape) that anyone worth their salt would be happy to know, if not for the unfortunate fact that they are characters in a comic book. Terry Moore goes to great lengths to illustrate and reinforce the very simple fact that, although she did endure atrocities, Sam doesn’t consider herself a victim of them. She doesn’t look for pity or understanding; no well-intended but essentially empty words of sympathy or condolence. She was, and is, first and foremost a Marine. Everything else is stuff that may have happened to her, but in no way did it break her.

Now, I know that I promised you laughs, and so far I’m thinking that you’re probably starting to think I was less than honest. Not to worry, because the rest of this comic delivered moments that had me laughing out loud ( #laughoutlouding ). Sam’s argument with Mike over whether or not Charlie Parker should be mentioned in the same breath as Jimi Hendrix, all while Sam wields a chainsaw to take apart a scrapped car, was one. Another was the near tragedy that was Vic and Larry’s aforementioned kidnapping attempt (please refer back to previous paragraphs, the bits where I mention Sam being a Marine). Rest assured the heaviness of Sam’s military service is more than buoyed up by her devil (dog) may care attitude. This isn’t a sad book, but a book that should give a flicker of hope to anyone who ever doubted that recovery from trauma was possible.

And there’s still the aliens… What’s their deal, anyway?

Nope, that’s all. No more. You wanna know what’s going on, you’re gonna have to buy the book. Or books, if you haven’t already given Motor Girl a shot. I honestly don’t see how anyone of any taste could read this series and be less than impressed. Now I have to go, because I need to look into reading Strangers in Paradise. If it’s half as good as Motor Girl, it would have to be worth the investment in time and funds. 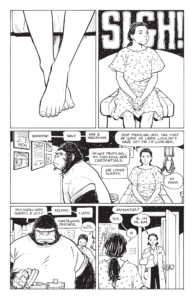 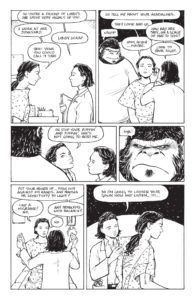 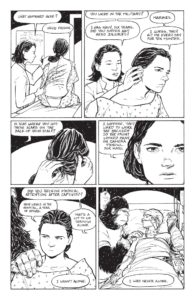