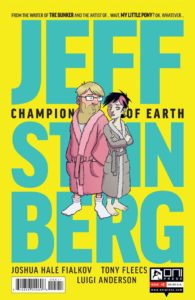 The penultimate issue of Jeff Steinberg’s first series! Do you think Jeff even knows what the word “penultimate” means? Yeah, us either. It’s the second to last issue of Jeff’s first intergalactic adventure and our hero… Wait, “hero”? It’s not like he got chosen because he was saving kittens from trees or anything–he was just trying to poop… Anyway, it’s almost over! Jeff’s survived thus far, maybe he won’t actually screw everything up! (unlikely)
———-

The Brotherhood of Planets has a problem. See, the Earth is right at the edge of their next big step into a larger universe. Unfortunately, there are those out there who really don’t like the idea, and have taken steps to eliminate the possibility. Their plan is to eradicate the Earth’s population, and then move in to enjoy the spoils left behind. Our planet’s only hope lies in the hands of one chosen to stand as our representative, to act as our champion. On his shoulders rests the fate of the human race.

His name is Jeff Steinberg, and we don’t have a thing to worry about cuz he’s really good at Japanese Super Mario 2. Who better to pilot an alien battlemech in a battle to the death?

Oni Press has done some pretty cool things, and their line of titles touches on pretty much every subject you can think of. What I haven’t seen much of, however, was comedy. I’m pretty sure there’s a good reason for that. Comedy is tough enough to do without adding the challenge of trying to make it all work on paper, in a comic book.

Think of all of the elements that go into making a joke funny, or selling a sitcom on TV. First and foremost, the key element in comedy is… timing. Everything else, the dialogue, tone, inflection, expression, can all be perfectly done but if you blow the timing on the delivery the whole thing falls flat. With all of that in mind, I have no idea how to even go about making it all work on the page, merging words and pictures and hitting all the right beats. Still, Fialkov and Fleecs made it happen, like Shaolin warriors whose power combines to form a giant battlebot from five mini lionbots, and the result is equal parts Hitchhiker’s Guide to the Galaxy and Sean of the Dead.

The artistic style of Tony Fleecs reminded me of Johnny Bravo and Dexter’s Lab- or maybe Teen Titans Go! for some of the younger readers out there. It’s perfectly cartoony and stylized in a way that works great with the tone of the book. The characters are unique and interesting… well, except for Jeff, but we’ll get to him in a sec… and the action is dynamic despite what some might think of as a simplistic style.

Now, let’s talk a bit about Jeff Steinberg. Instead of a heroic figure, this creative team has chosen an Everyman on whom to balance the weight of the world. Instead of someone like Perseus or Mark Wahlberg, we get “Sean of the Dead”. Jeff isn’t particularly skilled (except at Super Mario 2), and he isn’t courageous. He’s just a guy whose only real standout trait, according to his friends, is that when faced with a dare or a bet, he becomes a force of nature that will not be denied no matter how stupid a stunt he’s faced with. The fact that our would-be alien conquerors are already calling dibs on what parts of the planet they want to rule shouldn’t even be a factor.

Save the human race? Make it an extra-large stuffed crust pizza, and you’re on! 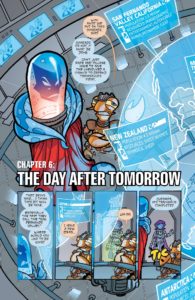 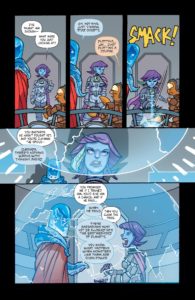 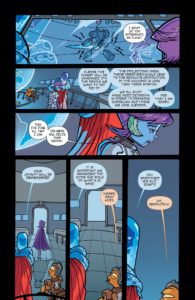