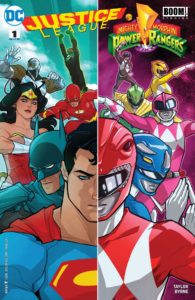 Two of comics greatest teams team up for the very first time! Something terrible has happened in Angel Grove! When the Command Center is breached and the teleporters are damaged, Zack is flung into another universe, where he’s mistaken for a villain by a mysterious masked vigilante. Can the other Power Rangers get to their friend in time to save him from Batman? Co-published with BOOM! Studios.
———-

Lord Zedd has infiltrated the Rangers’ impenetrable hideaway, and the only one able to prevent total disaster is Zack. Injured and on his own against one of the Power Rangers’ toughest enemies, Zack has a moment of desperate inspiration grabs hold of the evil warlord and uses the base’s teleportation system to zap them both away. Realizing Zack’s plan, the Rangers’ guardian and mentor Zordon shouts out a warning that the teleporter has been damaged… Too late, Zack realizes that while his plan did get Lord Zedd away from the Rangers’ hidden sanctum, separating them in transit, it didn’t drop them anywhere near Angel Grove.

The Black Power Ranger finds himself in Gotham City and in the presence of someone who doesn’t take kindly to people swinging battle axes in his town.

The crossover. We’ve seen it a thousand times, to varying degrees of success, and so long as fans pay to see their favorite characters butting heads we’ll see it again. Probably to varying degrees of success. What’s a little less common is the crossover that doesn’t stop at combining titles, but takes the ultimate leap and crosses publishers. Is it a gimmick meant to boost sales? You betcha! Is it also cool as hell and a fanboy’s dream? It can be.

Some of us remember Amalgam, the epic and at the time unheard of event that slammed industry leaders DC and Marvel together into a knockdown drag out, winner take all brawl among their biggest characters. Fans were given the chance to vote on who would win in a fight between, for instance, Captain America and Daredevil, Thor and Shazam, and even Lobo versus Wolverine (although my personal favorite was Aquaman versus Namor… look it up and tell me you don’t get a grin out of it). While the results could be argued as unrealistic- yeah, I know, in a comic book- it was a pretty big deal.

Lately, I’ve been seeing a few more titles coming along that have taken that plunge, and for the most part it’s been a hoot. Seeing Batman teamed up with the Teenage Mutant Ninja Turtles was, personally, a highlight of my comic book reading last year. Also, who can honestly say that they’ve never wondered how Archie would handle the presence of a Predator in Riverdale? Well, with the current resurgence of the Mighty Morphin’ Power Rangers, no small thanks due to Boom! Studios, we’ve got a team up that not many may have seen coming.

DC and Boom! are giving us the unlikely pairing of the Justice League and the Power Rangers, and as of this first issue I can say that they’ve got my attention. First of all, I’m gonna try to set aside your obvious consternation. While these Rangers may be the characters from the original show’s lineup, they have been given a bit of an update. Gone are the painfully corny dialogue, the obvious tropes and awkwardly two-dimensional characters. Okay, maybe not totally… Boom! made the bold decision to keep Zach as the Black Ranger and Trini as the Yellow, something that was a little “on the nose” back in the days the show first aired and absolutely would not fly these days. That said, these are the first Rangers, the ones who started it all, and if those casting choices raise a few eyebrows the complaints should be mitigated by much more character depth.

Y’know what, that’s enough with the socio-political stuff. I’m sure there are plenty of blogs out there more eager to touch on that stuff. I only mention it to try and convince readers to give these old/new Rangers a chance, so we can get on to the good stuff… the Super-powered beatdown!

This is the first issue, so expect some establishing backstory. It’s opened up interestingly enough, with an Angel Grove reduced to ruins, Zach claiming responsibility for the tragedy, and Superman doing his best to console him. From there we hit the rewind button, and get brought back to the meat of the story. Suffice to say, things happen, teleporters malfunction, and the Power Rangers end up in Gotham City squared off against Batman! The action stops pretty much right there, and we’re left with the promise of bigger and better things to come in the next issue, so hang in there.

Tom Taylor has crafted a story that maybe doesn’t have to make a lot of sense, but still manages to explain away the absurdity of the premise pretty well. The nuts and bolts of a crossover really aren’t important to all but the most cannon dependent sticklers. What matters are the interactions between characters who in all seriousness have no business interacting. In that, Taylor has done a great job. Being the first Ranger to find himself in Gotham, Zach is injured and confused. When faced with the menacing figure of Batman, he jumps to the conclusion that this must be another minion of Lord Zedd’s, and he attacks. For his part, Batman recognizes that the axe-wielding lunatic coming at him is hurt and disoriented, and does his level best to deescalate the situation without getting killed. The dialogue is well-written and fast paced, paying respect to the personalities and traits fans would expect from established characters, not just posing as an excuse to toss around rapid fire quips and catch-phrases.

The other important factor in any comic book is the art. Comics are a visual medium, and readers have developed some pretty high expectations. Stephen Byrne handles the workload brilliantly. Where the Power Rangers are typically bright and shiny, Batman is… well, he just isnt’. It’s a contrast that works out pretty well, even though now that I’m writing this I realize that the initial meeting is between the Dark Knight and the Black Power Ranger. Huh… well-played, fellas. I’ll just say that I’m a fan of Stephen Byrne’s artwork, the look and tone he gives to any character he works with, and he hasn’t disappointed in this crossover even so far.

Anyway, even though the action doesn’t really get going until the very end of the book, we’re given a taste that was enough to have me looking forward to the rest. Sure it’s all a gimmick, but you gotta admit that when you thought about the idea of Superman and Green Lantern taking on a Zord, it gave you a little bit of a thrill… 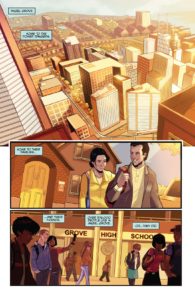 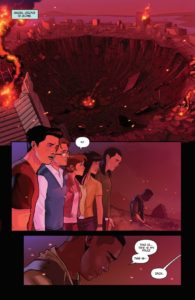 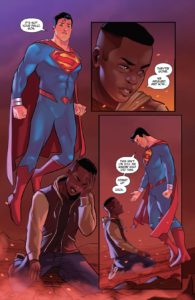