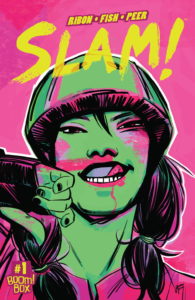 Jennifer Chu and Maise Huff (aka Knockout and Ithinka Can on the track) have been best friends since their first day of Fresh Meat Orientation for the Eastside Roller Girls, but when they get drafted for two different teams they’ll have to figure out if the bond between them is stronger than the pull of a team when a win is on the line.

You get slammed on the track and slammed in life, and in both cases you have to take your hits and get back up again!
———-

(Make sure you take a look at Susan’s spin on the comic, here…)

Meet Jennifer Chu, on her way to a Master’s degree in geology and determined to make her way through life without the help of her doting parents. Meet Maisie Huff, who having been recently dumped by her boyfriend is still trying to decide what to do with all of the plans they’d made together. While taking two very different routes, Jen and Maisie are on a collision course (or several) with their mutual destiny.

During tryouts, Jen establishes herself as a future force to be reckoned with. She’s fast and strong, and takes to the skates like she was born on wheels. Maisie on the other hand has, in her own words, “regret”. She’s tentative, worried about falling down, and not at all confident in her ability to hit and be hit. That all changes when Jen takes her under wing and encourages her to try. The two get through their first training session, each with her share of bumps and bruises over which to boast and toast, and besties are born. All that’s left for Jen and Maisie to do is pick their derby names (Knockout & Ithinkacan respectively), go home and wait for the call… hoping they both get picked up by the same team.

Roller Derby has been around for a very long time. It’s nothing new, but in recent years it’s experienced a bit of resurgence. Equal parts speed skating and WWE showmanship, the derby has once again been drawing women into its not-so tender embrace. What is it that brings them all into an activity that will probably never pay the bills, will most definitely cause pain and injury, and will inevitably take up more free time than anyone could reasonably expect to have?

Maybe it’s the camaraderie. Without a doubt, teams spend a great deal of time together through practices, matches, and victory/consolation parties. In that time, the ladies will be pushing themselves and each other to excel, like soldiers in the trenches. Or, maybe it’s the rush of competing, the urge to succeed in something that they’d never imagined they’d be able to even do. I’m no expert on the female psyche (duh), but I’m willing to bet that there’s a hefty dose of “all of the above” to be found in there. Roller Derby offers a chance for women of all types- mental, physical, financial, intellectual- to mix it up without worrying about societal expectations.

As a counter-culture, Roller Derby is all-inclusive. All you have to be able to do is remember the important rules: “Skate fast, skate HARD, turn left,” & “Get low, HIT somebody”. According to Pamela Ribon & Veronica Fish, once those basic requirements are met, Derby can change your life and show you who you really are. With sharp art and writing, characters showing some solid potential for growth, and a light-hearted tone that defies comic book norms, Slam! has a lot to offer readers looking for something that has more to offer than good guys punching bad guys.

Anyone who’s ever heard the phrase “fight like a girl” and wondered why that could be a bad thing… Anyone who watched the movie “Whip It” and wondered why the hell they never gave something like that a try… Anyone who’s ever considered the concept of “ladylike behavior” to be nothing short of a silly waste of time and effort… These are the people who should be reading this series. 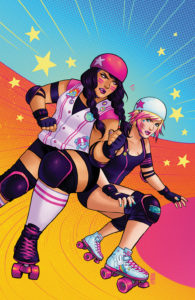 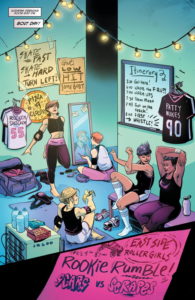 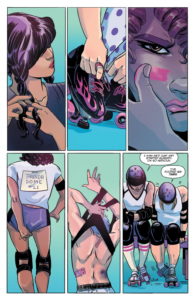 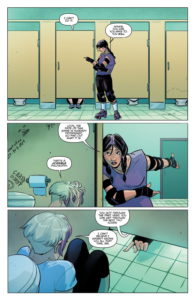 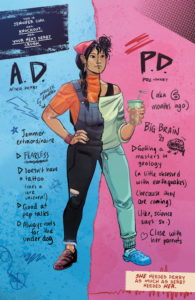 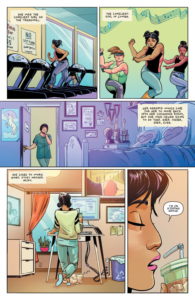