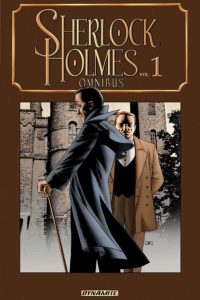 Presenting three captivating mysteries of Arthur Conan Doyle’s beloved sleuth, Sherlock Holmes, in the first-ever Omnibus collecting his comic book adventures! From young Holmes’ first encounter with Dr. John Watson, to the detective’s role reversal as a suspect for murder, to a rash of Liverpool killings seemingly committed by a supernatural entity, the finest whodunnits in the Dynamite Entertainment library begin with this very volume! Collects the complete “Trial of Sherlock Holmes”, “Year One”, and “Liverpool Demon” storylines.
———-

Fans of the Great Detective (not Batman, the other guy… think older, more Robert Downey Jr.) will have a lot to chime in on with this hefty piece of reading. In particular, the sequence of events in the early days of Sherlock are played with a bit to present a different sort of origin. Instead of Holmes and Watson meeting for the first time in A Study in Scarlet, wherein Holmes was already an active consultant for the police, it’s Watson who’s working for the constabulary as a medical examiner. Holmes is considered more of a pain in the neck than any sort of real help. For his part, the young Holmes is still learning the particulars of his chosen trade, and before long he’s solving crimes quicker than the criminals can think them up.

At a hefty 400 pages, there’s a lot to take in. I’ve only had the chance to finish the first story arc, Year One, in which Holmes gets his feet wet in a case dubbed The Butlers Did It. What follows in the full tilt mystery of The Twelve Caesars pits Holmes against a serial killer who uses the deaths of twelve Emperors of Rome as his inspiration. Early on in the adventure, Holmes is introduced to Dr. John Watson, who’s been aiding the police after leaving the military service due to injury. From there on, things move as we’d expect. In Watson’s own words: “In spite of my admitted aversion to mysteries, I find my mind unable or perhaps unwilling to dismiss the enigma dogging my every waking thought: Who is this Sherlock Holmes?”

Hopefully all but the most militant sticklers for continuity can forgive the liberties Scott Beatty took when writing this Year One story. I’ve read my share of Sir Arthur Conan Doyle’s works, and the changes to the timeline don’t in any way change the relationship between Holmes and Watson. It just gives them a bit of a head start before the tease for A Study in Scarlet that comes at the end of the arc. In every way but continuity, Beatty and Daniel Indro have crafted a great story that plays just around the outskirts of the backstory of Holmes and Watson. It cements them as a team, with Sherlock landing his bacon squarely in the fire and Watson doing his share of day saving.

I haven’t have the chance to get to the other two stories yet, but by no means am I done reading this omnibus edition. I just wanted to get the word out on this great addition to any fan’s collection. Maybe I’ll come back to this review and add to it, but for now I think it’s enough to say…

Come on, you know what’s next, don’t you?

The game (and the retcon) is afoot! 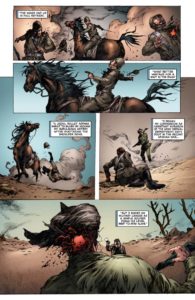 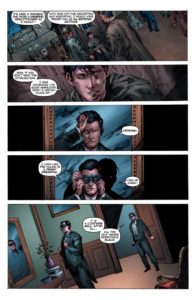 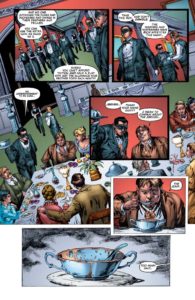 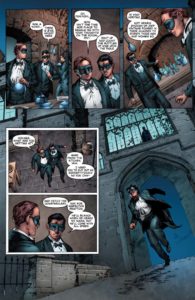 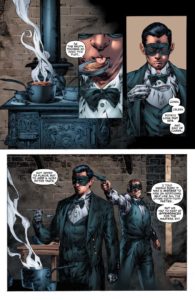 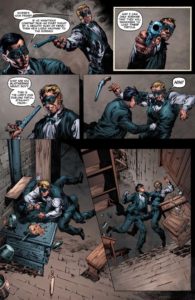 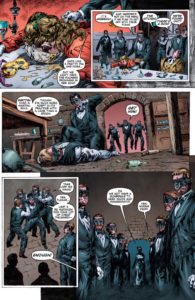