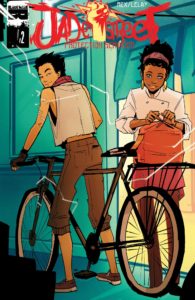 IN THIS NEW SERIES THAT MASHES THE BREAKFAST CLUB WITH SAILOR MOON, KAI, SABA, NOEMI, DIVYA, AND EMMA ARE (BAD) STUDENTS AT MATSDOTTER ACADEMY, AN ELITE PRIVATE SCHOOL FOR MAGICAL GIRLS. WHEN THEY ALL MEET FOR THE FIRST TIME IN A TOTALLY UNFAIR DETENTION, THESE PUNK ROCK WITCH DELINQUENTS CUT CLASS AND DISCOVER THE FATES MATSDOTTER HAS IN STORE FOR THEM ARE EVEN MORE SINISTER THAN THEY SUSPECTED
———-

In the first issue of the new series from Black Mask, readers were introduced to the students and faculty of Mattsdotter Academy. It’s a special school, where the magic girls go to learn their craft and become good marriage material. All of the basics are covered, from Reading, Writing, and Arithmetic, to Magical Combat and Defense. Anyone not deemed “adequate” by the all-seeing and all-knowing Headmistress is summarily dismissed without a second thought, sent on her merry way to live out her life among the mundanes, or mundies.

The core group of girls in the series are: Divya, the oldest at 17 and proud of her good grades (also a master with bladed weapons of all kinds); Noemi, a bit of a rebel who got a tattoo just to see what it would feel like; Kai, quick tempered and usually sporting the scrapes and bruises from her latest scrap (also, she likes to knit); Saba, the youngest of the girls at the age of 15 and a notorious prankster; and Emma, who isn’t much of a talker but is able to text at insane speeds and is really good with guns. Having nothing at all in common, the girls meet up in the time honored fashion when they all have to serve a detention for a series of unfortunate events during gym/magical combat class. They all get to know each other, learn they have more in common than they would have thought, and lacking any kind of adult supervision decide to skip out on their detention. Hilarity ensues.

As the story progresses from the first issue into the second, the girls learn about an unthinkable conspiracy surrounding Mattsdotter Academy. Members of the faculty are apparently able to steal the magic from their students- the ones everyone thought had been expelled- and have been selling the Glitter off to shadier members of the mundane community. Not knowing who to trust, the group winds up staying at the Blackbird Restaurant, run by their first ally Magpie.

Also in the second issue, the girls discover that the neighborhood outside of the Academy is plagued by a group of criminals run by someone named “Chasy”. The gang runs a protection racket, victimizing the local businesses and using their purchased Glitter as a means to threaten and bully the community. Seeing wrongs in need of righting, the girls take it on themselves to show Chasy and his thugs the difference between stolen Glitter, and magic that’s been earned.

With a fast-paced story pouring across the pages at breakneck speed, you’re gonna have to pay attention to this one. Katy Rex allows no breathers here, instead pushing the pace in such a way as to give her readers a real look into the mind of a teenaged girl. Seriously, I’ve raised one, and right about the time I was wondering “what the buttercream frosting is going on?” (I laughed a lot at the creative substitute swearing used in the book), I found myself reminded of many conversations with my daughter. The dialogue is quick and full of repartee, and the characters are presented as anything but flat stereotypes. Each of the young ladies has her own “thing”, good and bad, and is a force to be reckoned with in her own area of expertise… hand to hand, guns, knives, knitting.

The art from co-creator Fabian Lelay is a pretty cool mix of traditional comic book art and manga. There’s a lot of over the top expressions and cartoony action common to Japanese comics, blending in with the western styles many might be more used to seeing. It works, particularly in the character designs, keeping each of the girls distinct and impossible to mistake or interchange.

Jade Street Protection Services is a frenetic tale told at a breakneck pace. Please, tackle it if you’re looking for a break from the norm, because this is anything but a rehash of what’s been done. Just don’t let yourself get too caught up in what you think you might have missed. Chances are you haven’t gotten to the bit that explains a given reference yet. Or maybe reading this one is kinda looking at one of those 3-D pictures that you have to sort of let your eyes relax and go out of focus before you can see it.

It’s there; you just have to go mentally limp and let yourself see it. 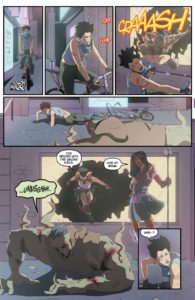 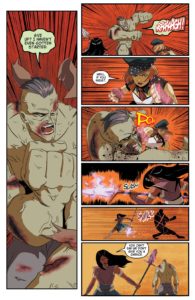