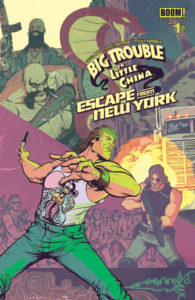 It’s the mother of all crossovers as Jack Burton and Snake Plissken meet for the first time ever anywhere!

Done with director John Carpenter’s complete blessing, witness this melee of the mullets as two cult-classic characters made famous by actor Kurt Russell crossover in an improbable adventure.
As lightning cascades around Jack and his good ol’ Pork-Chop Express, he finds himself transported and driving through the horrors of what seems to be the dystopian future of…Escape from New York?!

Snake Plissken catches wind of Jack and goes on the hunt to find who is trying to steal his identity.
Prepare for the road trip of a lifetime, with Jack and Snake rumblin’ down the streets of a dystopian future to find what craziness caused Jack to jump through worlds.
Written by Greg Pak (Totally Awesome Hulk, Action Comics) and illustrated by Russ Manning Award nominee Daniel Bayliss (Kennel Block Blues, Translucid).
———-

With the gentle sound of country blues singer Blind Apple Mary playing across the airwaves, the Porkchop Express makes its way from Point A to Point B. The driver, one Jack Burton (who?), kills time on his long haul run by musing over his past adventures, all the while unaware that he has a ghostly passenger- David Lo Pan- on board. Lo Pan is still holding a grudge over the indignity he suffered at Burton’s hands (evidenced by the ghostly knife still sticking out of his ghostly forehead), and plots his revenge. The musing and scheming are interrupted by a blinding flash of light as our hero, Jack, is tossed about the cabin of his beloved truck…

… and finds himself driving along the barren landscape of Oklatexas, 2001. He’s deep inside Marauder territory, which would go a long way toward explaining the scene out of a Mad Max movie. The aforementioned Marauders have the Porkchop Express surrounded, and are in the process of shooting her full of holes.

You know what ole’ Jack Burton does at a time like this? He white-knuckles the steering wheel and stomps on the gas. The chase scene ends when Marauders get a good look at who’s driving the rig, and run in terror from the legendary Snake Plissken. Soon enough the word is out, and a call to arms goes far and wide- Snake Plissken is declared Marauder enemy number 1, and he’s to be killed on sight. A situation that’s equal parts baffling and infuriating to the real Snake Plissken, who’s now made it his mission to learn the identity of the idiot impersonating him, and removing him from the gene pool.

So, do we have any fans of the works of John Carpenter out there? Y’know something, I’m willing to bet that we do. I’m also willing to bet that when you saw the title of Boom! Studios’ latest foray into Mr. Carpenter’s world, you exclaimed “No way!” or something to that effect. I’m here to tell you, unequivocally, “way”. The creative team of Pak and Bayliss have mashed together two of the most disparate and un-mashable properties, and they’re off to a good start. Both of the main characters come across as completely different, each with their individual quirks and not at all as though they may have been played by the same actor. The character designs also manage to give Jack and Snake distinctive looks, while still holding to their obvious similarities (cuz, in case you weren’t aware, they were in fact played by the same actor).

If you’re worrying over the logistics of Jack Burton being pulled through time into the post-apocalyptic world of Snake Plisskin, maybe you’re not as familiar with Burton’s previous misadventures, in film or in print. I’ve read some of the other Big Trouble titles from Boom!, and this isn’t the strangest premise by a long shot. I mean, it isn’t like Jack Burton was pulled forward into our present day to find Wang an overweight restaurant owner whose wife Miao Yin divorced him because he was too boring, while newspaper reporter Margo Litzenberger publishes a best-selling book called “Big Trouble in Little China” (soon to be a major motion picture starring Kurt Russell)…

See, Jack Burton and Snake Plisskin meeting up doesn’t seem so outlandish now, does it? 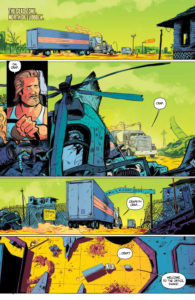 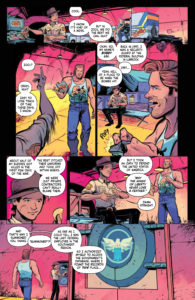 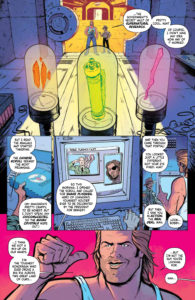 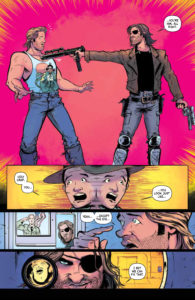 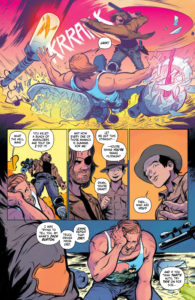 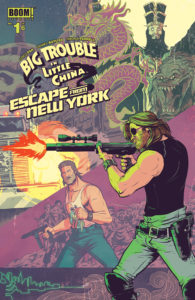 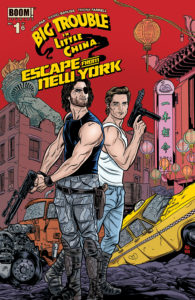 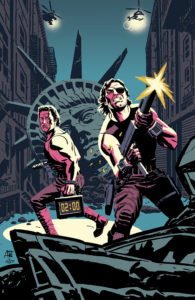 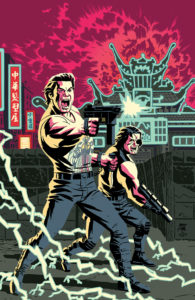 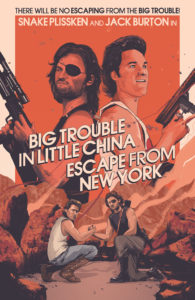