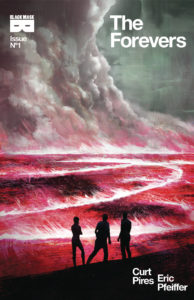 Five friends struggling on the brink of stardom sacrifice everything in a black magic pact that brings them all the wealth and glamour they ever wanted. But now, years later, the glow is fading. When one of them is killed in an accident, they each feel a pulse of magic rise in them. They realize the glow is spread evenly among the group, and if one dies that power is passed along to the rest. Suddenly, they are being hunted. One of them has decided to kill the rest and harness the remaining power.

As they search for the killer, each of The Forevers will be confronted by the macabre reality of the lengths people will go to be adored, to make sure the spotlight never fades.
———-

This is one of those down and dirty, “slow burn” kind of books. The story unfolds slowly, revealing one tiny, grungy piece at a time, and then slapping the reader across the face with brutal realization. The reader is dragged through the muck, right along with the characters, and is forced to confront the depths of depravity, and our indifference to it for the sake of ephemeral fame. The depths people will go to in order to reach Fame & Fortune is nothing at all when compared to what they’ll do to hold onto it, clenching it tight in bloodless fists until their knuckles split and bleed.

Does any of that last paragraph sound over the top? Melodramatic? Maybe a little “too much”? If the answer is yes, then maybe a lighter, happier book is more for you. If you think the description sounds like something you could really sink your teeth into, if you enjoy the kind of Quentin Tarantino storytelling that keeps you wondering “what the hell is this even about?” right up to the very last page of the issue, here you go.

First off, I have to talk about the art… It looks very much like Eric Scott Pfeiffer has already cast a movie adaptation of this series. I don’t think I turned a single page where I didn’t find a celebrity “guest star”, the character looking just enough like the real world counterpart to give that sense of “ooh, cool, I didn’t know he was in this!” The style lends itself well to the subject matter, taking the supernatural undertones and grounding them with a near photo-realistic look.

Now, on to the beautiful chaotic mess that’s been concocted by Curt Pires. The Forevers is written in a series of revealing flashes. First we’re shown a group of friends assuring themselves that they’re ready for what’s to come, and then setting a fire to make it all happen. That fire, we’re eventually led to believe, is a supernatural force that triggers a series of events leading each of them to their own personal fame and fortune. Each character handles their success differently, and by the end of this first issue, we’re left wondering just who it is we’re supposed to be rooting for. When the glitter starts to fade, it’s apparent that these people are each extremely flawed in their own way. In all honesty they’re all a bunch of pricks, each and every one of them all too happy to step on the person next to them just to get a little bit higher.

Which, I guess is really the point. We’ve seen the “beautiful people” in the tabloids, on television, getting themselves into trouble over and over again. They trip and fall into the muck, get themselves nice and dirty only to jump with that perfect smile and a glint in the eye to say “I’m okay!” We, the normal workaday folk who haven’t made deals with supernatural forces to get where we are, turn to the person next to us and ask, “What is wrong with them?” In The Forevers, that question looks like it’s going to be asked over and over again as we see a group of people who’ve done the unthinkable to achieve the impossible, but it’s never enough and it always fades.