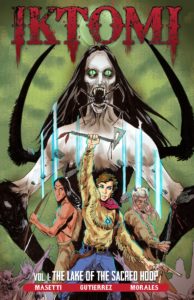 In this Dark Fantasy/Western Saga, two separated DIMENSIONS vie for absolute domination of the Human Race.

In one, the Upper World, the Lakota Indians and their allies fight for survival against irreducible oppressors during post-Civil War America: Blue Coats, Road-Agents and…horrendous and dreadful Creatures from Native American Mythology!

The other is a dangerous and dreadful reign known as Xibalba, the “place where the sun refuses to shine”, ruled by an evil High-Priest ( HURACAN ) and other dark forces. An Indian Trickster Spirit ( IKTOMI ) is the link between the Two Dimensions.

As a memorable clash is about to erupt, the fate of all Humanity now lies in the hands of a white-man-turned-Lakota-Shaman ( JACK FREEMAN/TWO MOON ), a Lakota Holy Man ( MEDICINE EAGLE ) and their…”doubles” in Xibalba!
———-

Opening in April of 1564, in what is currently the mysterious land known to its people as “Illinois”, a group of Spanish Conquistadors are on the last legs of a three month journey. At the end of this trek is the promise of mounds of gold, coins heaped deep enough to swim in. At least, that’s what motivates most of these adventurers. The officers leading the company, Pedro de Soto, Gonzalo Jimenez de Leon, & Vasco Numez de Balboa, have different ideas. For them, the end of this quest will grant them access to the temple mound city of Cahokia. At gates of the mound, de Soto will call upon Huracan the Supreme Lord of Xibalba, unleashing him on the world in exchange for power & glory.

What could possibly go wrong with anything in that last sentence?

Thankfully, these misguided Spaniards aren’t completely unopposed. They’re followed by the shaman Eagle of the Sun and his band of followers, determined to prevent the intruders from accessing the temple mound. What’s more, the Spaniards have two captives, young Tecumseh and his wife Itzel, and Tecumseh is not what he appears. The battle is won through the combined efforts of the shaman and Tecumseh, granted by a narrow margin, and Huracan is once again locked away behind the gates of Xibalba.

Fast forward, and the young United States of America is recovering from its Civil War. Jack Freeman is a young man with the responsibility of leading a wagon train across untamed territory, with a stop at Fort Laramie before pushing to their final destination in Virginia City. On the trip, Jack’s taken a liking to Allie, and he’s made her a promise to get her to Virginia City safe and sound. Jack’s also giving some serious thought to settling himself there, given the encouragement of young romance to release him from a haunted past. For now, Jack has chosen a good spot for the travelers to camp for the night, on the bank of a lake protected by ancient Native American superstitions… The Lake of the Sacred Hoop.

As so often happens, sudden violence disrupts the best laid plans as a group of bushwhackers attacks the wagon train with an eye on their lockbox full of money and gold. The sudden activity on this sacred ground stirs up spirits best left alone, and the cycle starts all over again. Standing in the way of the supernatural forces attempting to escape from the underworld of Xibalba, the shaman Medicine Eagle and his followers know what’s lurking on the other side of the gate, eager to gain a foothold in this world.

And Jack Freeman is not what he appears.

In Iktomi, the team of Source Point Press, Masetti, Gutierrez, and Morales have crafted a dark supernatural tale set against the backdrop of the Old West. They’ve tapped into Native American lore to create something new, and with a few exceptions it’s a very well done work. Some of the dialogue comes across as a little forced, and it could have benefitted from another round of editing. All of that aside, Iktomi is a pretty ambitious project that explores some underutilized mythology. We have the Upper World, our world, and the other dimensional realm of Xibalba, home to horrors hungry for conquest. Between the two worlds are the Lakota shaman Medicine Eagle and Jack Freeman.

So how does a white man get tied into this other world of magic and evil spirits? Some folk are just born lucky, maybe, and this opening chapter leaves enough questions to bring readers back for more. Hopefully, with a little more polish this can be a story that gains momentum and opens up some new ground for fans of supernatural horror. 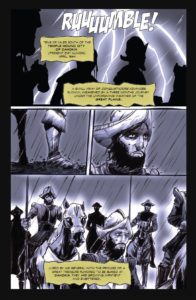 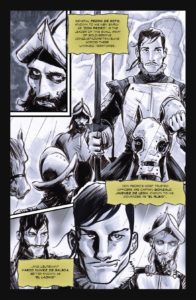 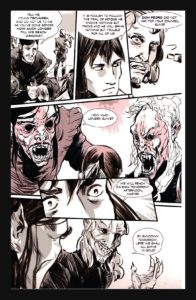