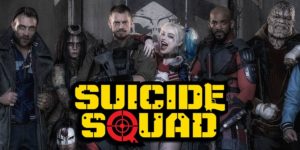 A secret government agency recruits a group of imprisoned supervillains to execute dangerous black ops missions in exchange for clemency, which inevitably leads to chaos.
———-

Cutting straight to the chase, I liked Suicide Squad. It’s a solid, entertaining action movie that delivers most of what it promises. That promise is right there in the tag line, straight from the IMDB web page… Chaos. What Suicide Squad tries to do is present the Bad Guys of the DC Universe as a reluctant team of super criminals, coerced into doing the dirtiest jobs that no one else can manage. They’re not heroes, definitely not “good guys”, but not necessarily all “bad”.

Without a doubt, everyone in this movie did their job, and they did it well. Will Smith is… well come on, he’s Will Smith. As Deadshot he is without a doubt a bad man, but he’s not an evil man. Sure he kills for money, but he’s got his own sense of morals and honor. He doesn’t kill women and children, and once a job is accepted it’s as good as done. We’ve seen this character many times… Many. Times. And Will Smith brings to the role his usual sense of humor and commitment. In the end, although he claims throughout the movie that he isn’t seeking redemption, he finds it to a certain degree.

Margo Robbie as Harley Quinn is, right down to the core, an agent of the above mentioned Chaos. At any given time, Harley can be counted on to do that one thing no sane person could be expected to do, and she’ll do it without a second thought. When it comes down to it, she has an epic lack of impulse control. Margo Robbie was into this part, and it really did show. She was every bit the “leap before you think” character we’ve come to expect, and my hat’s off to her for it.

Viola Davis as the ruthless Amanda “get the damn job done” Waller is the quintessential Iron Bitch from head to toe, and before the end credits were rolling there probably wasn’t a person in the audience second guessing themselves on who the real bad guys were. Picture the most heartless politically influential powermonger, and you’ll be on your way to understanding the depths to which Ms. Waller will go to see her goals met. Doing it all without cracking into Sunday Matinee movie villain mode is a tribute to Viola Davis, but I’d love to see the outtakes.

Karen Fukuhara… Katana… She was one of the characters I was most looking forward to seeing in action, as I remember her humble beginnings in Batman and the Outsiders back in 1983. Now, I’ve seen some of the criticism for her role being underplayed, particularly from Asian-Americans, and I understand how frustration could result from her not getting more screentime and dialogue. From my perspective, Katana is the Boba Fett of the movie, whose mantra should be, “It’s not what you say, it’s how friggin cool you look not saying it.” And for what she was given in the part, Karen Fukuhara piled in as much character and emotion as could be expected from anyone, particularly in the scene where the properties of her sword are explained.

Jared Leto… Wow, what can I say about his take on the Joker? He was everything you could hope for and expect from any iteration of the iconic villain. First and foremost, the terms “off-putting” and “disturbing” come to mind. As the ultimate manipulator and emotional roller coaster operator, Leto’s spin on the Clown Prince was at times uncomfortable to watch. I’m thinking particularly of the scene in which he delivers his oft-seen dialogue from the movie’s trailers, “Oh, I’m not gonna killa ya… I’m just gonna hurt ya, really, really, BAD.” When you consider (and this has been pointed out over and over again leading up to the movie, so it’s not a spoiler) that this scene is where Mister J really digs into Doctor Harlene Quinzel and puts her well on the path to becoming Harley Quinn, the poster child for abusive love/hate relationships, it’s amazing that more feminists haven’t cried #Outrage over the treatment. One thing I really wasn’t impressed with in this version of the Joker was the “Tony Montana” spin, right down to the excessive jewelry and gold plated AK-47. I understand that there have been many characterizations of the Joker over the years, on screen and in comics, and that eventually they’re going to have to explore new ground to keep him relevant, but it just didn’t quite work for me. I dunno, maybe I’m too much of a purist, but it just came across as trying too hard to modernize this classic character.

Jay Hernandez as Diablo, another standout for me, put out a great performance as one of the only Squad members who was truly looking for redemption. His story of self-destruction is a tragic one, and in its aftermath, Diablo has no interest in participating in violence of any form, for any cause. It takes a bit of prompting from Deadshot before el Diablo gets into the action, but it is impressive when he does. I’m hoping there’s more of an arc for this character in any future movies down the road.

There’s more, to be sure, but I’m already at a word count of 929, so I’ll just sum up the remaining characters: Rick Flag is pretty much every hardened soldier with a soft heart you’ve ever seen. Killer Croc isn’t really much of a factor in the story, until we get to the scene that requires Navy SEALS to swim into danger (I actually said “Aha!” out loud in the theater and got some dirty looks from other moviegoers). Slipknot… wow, (sorry, one spoiler) this poor bastard was kept around until the story called for someone to be made an example of, and then promptly killed to show the audience that Amanda Waller means business. The Enchantress was fine, and Cara Delevingne did a decent job of investing some emotional conflict in the character, but in the end she spent too much time trying to be all… I dunno, enchanty and otherworldly… and wound up wiggling and squirming like a five year old who really has to pee.

In the end, while I was entertained, I have to say that Suicide Squad didn’t really break any new ground. None. It hit pretty much every beat an action flick should, bringing in the feel of a Dirty Dozen for the DC Universe. We’re given several lines, many of which I was able to guess before they were delivered, to show the Suicide Squad as a group of very reluctant, but in the end devoted and endearing, heroes. Most of the main cast were given their time to shine, and for the most part they delivered very well. I think it’s the actors who actually manage to save the movie from a “meh” rating, elevating it to “kinda cool”.

Seriously, don’t pay attention to the critics as they do their best to tell you how you should feel about Suicide Squad. I think they really do just hate superhero movies, don’t want them to succeed, and are actually kinda mad when they do. If you just want to watch some cool visuals, some quality violence involving guns, knives, baseball bats, and boomerangs, check this movie out and make your own decision. With a little love, and hopefully an extended cut that fleshes out some of the gaping plot holes, it could still be a solid addition to DC’s wobbling yet determined movie franchise.