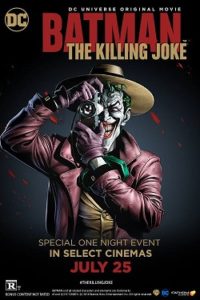 Based on Batman: The Killing Joke by Brian Bolland and Alan Moore (1988)

**Note: This is full of spoilers for both the graphic novel and the movie.

Batman: The Killing Joke was a graphic novel I read sometime around 2000-ish, because I had to find out why Barbara Gordon was in a wheelchair in my favorite comic book at the time, Birds of Prey. (It’s wonderful. You should check it out.) B:TKJ was the first book of any kind where I finished the last page and wanted to destroy the book. I was in the act of throwing it across the room with some force (with plans to stomp on it and then set it on fire) when my then-boyfriend (now husband) gently took it from me and reminded me that it was his book.

Cut to the special release of The Killing Joke to theaters in July. My husband asked me if I REALLY want to go, because reading the graphic novel had fostered a real hatred of the Joker in any form. I love both Mark Hamill and Batman: The Animated Series, so I figured I could take it. We went, I became nauseated in the same place as in the GN, and lived to the end without wanting to throw Skittles at the screen.

What I really liked about this adaptation is the enlargement of the Batgirl/Barbara Gordon character so that it moved from being a Batman/Joker story to being a Batgirl/Batman/Joker/Gordon story. They included some of the Barbara Kesel one-shot Batgirl Special from March of 1988, subtitled “The Last Batgirl Story.” Although the hired killer is substituted with a mob boss’ offspring, it is essentially the same plot to get Barbara Gordon to give up the Batgirl cowl.

There is a short scene in the movie where Batman and Batgirl are having a heated discussion, they kiss, and we assume they make love. Many have said this makes the movie sexist, and it turns Barbara Gordon into a “slut.” I don’t feel that is the case. Barbara Gordon was always an adult in the comics – working as a librarian in her first appearance – and always wanting to impress Batman, so a romance between the two is an organic leap. Showing her as vulnerable (having her pictured at a lower level than most of the men consistently) and having her make mistakes based on feelings just highlighted her youth and inexperience, not any weakness. That’s not sexist – she’s the youngest main character in the story and hadn’t been bitten hard by life yet. In my opinion, this is a turning point, a point of maturation for her. She makes the hard decision that she does NOT have the drive or correct motivation.

The rest of the story unfolds with few surprises – just geeky joy at seeing the book in motion – but I did become nauseated as the Joker unbuttons Barbara’s shirt (as I did in the graphic novel) in preparation to take pictures. This Joker would never further traumatize her by rape, which was almost implicated in the GN but you never quite knew. The horror of her father seeing these pictures as the Joker sings (a perfect creepy touch) and tries to send him over the edge made me hide my face for a few moments, but by the end I was back to myself, both Barbara and the Commissioner survived, and the Oracle coda made me happy.

The classic casting of Conroy, Hamill, Strong and Wise gave this story a sense of gravitas and importance; the stellar Hamill giving Joker some class while Strong gives us a smart yet sensitive Barbara Gordon. Conroy is perfect, and Wise was strong as the tortured Commissioner. The direction choices were good, and the music was fantastic, giving the feel of the old Animated Series again, which it should be with those voices.

This does really become a new story, but the bones of the old story are visible and prominent. Good bones covered by good flesh makes a good story over all. I give it 7/10.