Syrinscape, creator of the award-winning apps that put the power of custom, movie-like sound effects, soundscapes and music at the fingertips of the gamer, announces today its line-up of activities and events for Gen Con 2016, the Best Four Days in Gaming.

Live RPG Plus Pathfinder All-Star Event
Dicestormers host Benjamin Loomes will attempt a TPK against Pathfinder all-stars Erik Mona, Jason Bulmahn, F. Wesley Schneider and Crystal Frasier inLive RPG Plus, an audience-driven interactive RPG adventure. Using the Realm Works campaign management tool and Syrisncape’s sound app, Live RPG Plus will transform the Westin Capitol III Ballroom into a fast and fun gaming experience for the players as well as the audience, who will contribute to the action via shout-outs and social media to alter the course of the game. The event includes live audience auditions to become the monstrous roar of the boss the party will encounter, a workshop for creating sounds for tabletop games and incorporating Syrinscape and Realm Works into your game. Tickets are $2, on sale now. Saturday, August 6 from 7-9:00pm.

Syrinscape/Catan® Demos
Join Ben Loomes in the Catan Studios booth #317 in the exhibit hall as he demos the new Catan SoundSet, providing immersive and realistic sounds for the island of Catan and the amusing quips of the robber. Thursday and Friday,1:30-2:30pm and Saturday and Sunday, 11:30am-12:30pm.

The award-winning Syrinscape apps bring fantastic, realistic sound to tabletop gaming. Each can be completely unlocked for free for 30 days atSyrinscape.com/freetrial and include two free SoundSets to keep after the trial.

About Syrinscape
Using a powerful audio engine and complex algorithms to produce ever-changing soundscapes and rich encounter-specific music, Syrinscape conjures every aural landscape imaginable, from ethereal forests and stony shorelines, to dank, vermin-filled dungeons, to the spooky depths of the underdark. Designed by accomplished composer and tabletop gamer Benjamin Loomes, along with the developers at the Interaction Consortium, Syrinscape builds on more than 8 years of prototyping and community feedback. Syrinscape is based in Australia. Syrinscape is available for a wide range of devices, including PCs, Macs, Android Tablets and phones, iPhones and iPads, and the players can be downloaded via syrinscape for free. 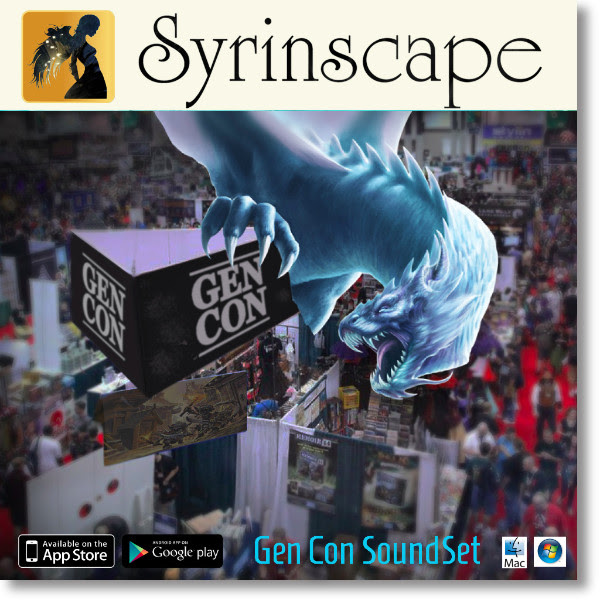