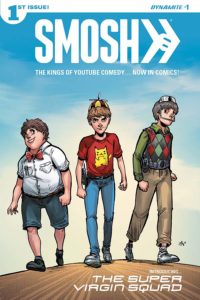 Smosh #1
Dynamite Comics
Created by Anthony Padilla & Ian Hecox
Available May (the) 4th (be with you)!
Super Virgin Squad
– Written by Michael McDermott
– Art by Franco Viglino
– Colors by Mohan

SMOSH, the Kings of YouTube Comedy, now bring their wildly popular brand of humor to comics! Behold, the Super Virgin Squad! Gathered together in the V-Cave, a converted Cold War-era survivalist bomb shelter and secret suburban headquarters, this group of unique individuals channel their sexual frustration into superhuman abilities to defend the physically weak, the socially awkward… the geekiest among us! Billy, Paulie, and Stevie’s latest mission? To save one of their moms from the presumably slimy seductions of a website swinger! Quick, virgins… to the Chastity Cycle! Also, as a special back-up story, it’s That Damn Neighbor! Benny Jean and Cletus just want to drink beer and admire their lawn flamingo, but the weirdo next door will not be ignored!

With over 9 billion views and 38 million combined subscribers on YouTube, and 31 million social followers, SMOSH has one of the strongest digital footprints of any media brand in existence today. Based on the strength of this audience, SMOSH has also seen multiple chart-topping musical endeavors, record-setting channel spin-offs and top-selling mobile and gaming apps, with more than two million downloads to date. And, in Summer 2015, the brand released its first feature length film SMOSH: The Movie which debuted at #1 on the iTunes comedy chart. SMOSH’s Anthony Padilla and Ian Hecox also became the first digital stars to be immortalized in wax by the world famous Madame Tussauds.
———-

Did you ever have that thing? You know exactly the thing I’m talking about, the one that you stared at way longer than is probably healthy, but you couldn’t help it. There’s something about it that you feel like you need to do something with/about/to it, but you’re really not even sure that you know what the hell it is that you’re staring at. That was how I felt when I read this damn book. I still don’t have any idea how I’m going to make this review work, because Smosh #1 really is a bizarre bit of business, but I’m sitting here typing it out anyway.

The first story in this inaugural issue, “Super Virgin Squad” (you heard me), takes place in “Smalltown, USA”. A town like many other, this particular one is the home of three uniquely gifted- and yet horrendously, dysfunctionally challenged- youngsters. Meet Billy, Stevie, and Paulie, three teenagers who have found themselves relegated to the status of square peg. They don’t quite fit into any of the social categories preferred by teens, they haven’t been embraced by the masses and as a result they’ve come to understand the overriding problem levied on boys of a certain age who have been denied an… outlet. And yet, these three socially awkward youths have learned to channel their pent up… frustrations… into super powers, and they use these abilities to defend others of similar social status: the physically weak, the geeks, the nerds.

Billy, able to hover with the help of his very uncool propeller beanie, is the leader of the group. Stevie, having received so much love from his single mother, is able to harness that love to heal others with a hug. Paulie, with his orthodontic headgear firmly in place, possesses the mightiest jaws on the face of the Earth, able to bite through almost anything. When these three… energetic… lads join forces, nothing can stop them. Their one weakness? Should they ever find… release… from their ever present… tension… they would lose their powers and become just like other physically underdeveloped teenagers, helpless in the face of societal perceptions.

Look, I’m just gonna spell it out. These are three very horny teenage kids who, lacking an outlet for their raging hormonal urges, have taken that energy and put it to other uses. Their love of Taylor Swift and her “musical genius” fuels the powers and abilities that set them apart from their less fortunate peers, and they use those powers to help the helpless and defend the defenseless. Pretty noble, right? Their first mission presents itself when they discover that Stevie’s Mom, instead of catering to her sweet little Stevie Wevie’s needs, has been lured out of the house on- wait for it– a date! What manner of nefarious beast would seek to entrap a poor woman, dragging her off for a night of entertainment, where her own fulfillment becomes the priority, instead of letting her stay at home where she can shower poor neglected Stevie with affection and cookies? Super Virgin Squad is on the case, and they’ll use every iota of their skill, channel all of their… energy… to expose this monster for the cad that he must be!

So, yeah. It’s all a little awkward. But despite all of that, Super Virgin Squad manages to be pretty entertaining. Michael McDermott uses pretty liberal doses of exaggeration and humor to peel back the layers of one of the stages of life that no one likes to talk about. It’s all extremely left of center, and while I’m not so sure how happy I would have been being a teenage boy who had to exchange some “me time” for the ability to hover a few inches off the ground, in the context of this story it gave me some laughs. I could relate to the humor on a couple different levels, not only having been a teenage boy, and also not really fitting in with any of the established cliques as a kid.

Now, the second story, “That Damn Neighbor”. Seriously, I’ve read it three times, and I have no idea what’s going on. There’s this redneck in a muscle car, and he’s smack talking this other guy who looks like he could’ve been an extra in an old Devo music video. This other guy doesn’t say anything, just stands there in his too small shorts, with his strange bowl cut hair (kinda looked like Moe Howard from the Three Stooges to me…), but redneck guy challenges him to a drag race to settle once and for all… yeah, I don’t know. There might be a context here that I’m missing out on, some backstory that I’m not privy to, or maybe I’m just not that into drag racing.

The cover makes the proclamation, “The kings of YouTube comedy… now in comics!” I’ve done some internet homework and found the Smosh YouTube channel, chock full of comedic shorts and bizarre clips. I haven’t watched a lot, but right now, my knee jerk honest review of this one is that it looks like Smosh’s journey into comic book comedy anthologies could give some off the wall laughs. A title like this has an audience out there, as proven by past successes like Mad Magazine, or Cracked, and kudos to Dynamite for taking on something that seems to be a pretty big step out of their wheelhouse.

If it’s bizarre, slightly twisted, off-color comedy you’re into, Smosh could fit that bill for you. At the very least, you should read it just so you can say that you did it. If you wind up not liking it, or even if you get caught laughing at it, I take full responsibility.