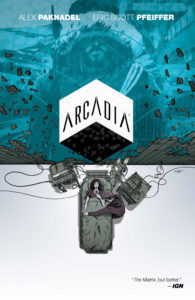 In the early 21st Century, seven billion people died during a global papillomavirus outbreak. As the disease tore through communities, the world’s governments took radical action to ensure humanity’s survival: the brains of the dying were scanned, modeled, and uploaded to a vast computer simulation housed in enormous data centers around the globe.

They called this simulation Arcadia.
———-

Pandemic- having widespread effect, existing in the form of a widespread epidemic that affects people in many different countries; a disease or condition that is found in a large part of a population.

When the papillomavirus began to run out of control, adapting to every treatment and inoculation we could throw at it, it did what no other amount of diplomacy could. It united the human race as the greatest minds combined their efforts to create a haven for the dying. What they created was Arcadia, the massive simulation designed to house the uploaded minds of everyone who would have otherwise been completely lost to us.

They didn’t so much cheat death as come up with a patch for it.

Is Arcadia perfect? No, but if we’re being honest with ourselves, what is? This new cross section of society is still ruled by the same concerns, money and power, that have confounded and corrupted us for as long as there has been an “us”. The added twist is that in this new reality, it isn’t avoiding death that concerns the wealthy. Death is only an issue for “the Meat”. Among the “Glimmer”, where things like aesthetics are only limited by the number of pixels one can afford, appearances are both deceiving and fluid.

Does Arcadia have its perks? Who hasn’t wanted to just make a hop, skip, and a jump, and take off into the sky like an eagle? Totally doable in many territories where gravity has been ruled as “negotiable”. Just be careful that you don’t cross over into airspace where more traditional ideas of reality have been upheld in the programming. Falls from high places might not be fatal in the strictest sense of the word, but until all of the injuries sustained have healed, it still hurts.

Meanwhile in the real world, efforts to find a cure for the still rampant papillomavirus continue. It’s a battle that we’re still losing though, as the number of the dead and dying continues to rise, and the energy demands of maintaining Arcadia’s processors keep climbing. Newly elected President of the United States Melina Gomez has her first appointment inside Arcadia to speak to their United Nations representatives. She’s never been inside Arcadia before, but she has a guide to help her navigate through her negotiations.

Which brings us to Lee Pepper. Lee is the Chief of Operations for Arcadia Base 1, located in real world Alaska, and leading a complicated life to say the least. He’s been in contact with his daughter Coral, a victim of the pandemic and currently residing in Arcadia. This contact is illegal, as it’s been deemed unhealthy for the living to try to maintain ties with their Arcadian departed (suicide rates shot up shortly after Arcadia when online as people sought to rejoin their loved ones). This contact is also complicated by the Arcadian existence of Lee Garner, Coral’s father inside the virtual world. Apparently, Lee Pepper faked his death, uploaded a copy of himself into Arcadia without actually dying IRL (In Real Life), and created a new identity. Virtual Lee has no idea that he’s actually still “alive” on the outside, believing himself to be the “true” Lee Garner instead just a carbon copy.

If all of this seems like too much to handle in the small doses that would be doled out by monthly issues, your timing is perfect! This review isn’t about any individual issues, but is covering Boom! Studios’ release of their Arkadia trade paperback… 212 pages of complex science fiction/cyberpunk awesome that would make The Matrix read like “Green Eggs and Ham”.

So if you managed to follow along with my longer than normal summary of the plot(s), you should be getting the idea that there’s a lot going on here. But that’s not the only thing that makes this story awesome in my opinion. It’s more than just the layered plot within a plot, within a plot setup concocted by the gifted (and possibly twisted) Alex Paknadel. It’s the smaller details that he wove into the story.

Have you ever heard of the concept called the “Uncanny Valley”? It refers to the sub-conscious part of our psyche that shies away from simulations that come very close, but don’t quite match natural beings. Did you ever see the movie “Polar Express”? There are many who think that the reason it didn’t do so well was the fact that its CGI was too close to being realistic. People looked at the computer generated Tom Hanks, and were actually bothered by it because it came too close to the real thing without actually sticking the landing. In more technical terms, it creeped people the hell out. Not a win for a family oriented Christmas movie.

The Uncanny Valley is referenced in Arcadia, when Lee Pepper is escorting new President Gomez into the simulation for her first visit. He tells her, “Don’t look the Glimmers (nickname for the residents of Arcadia) directly in the eye. That’s where the Uncanny Valley really messes with you.” From this, the readers are tipped off to the imperfections inherent in the simulation. The programmers did a good job, but it isn’t great. It’s also pointed out that the Glimmers will actually use the Valley to their advantage, scheming to unsettle their IRL counterparts by exaggerating, and in some cases mutilating, their computer generated features.

That kind of attention to detail is what really pushes a comic book over the top for me. The fact that the creative team on Arcadia actually thought to dig that deeply into obscure theories, to weave a quirk of the human psyche into their story with an almost offhanded comment early on, should qualify them all for genius status. These details, when combined with some topnotch artwork from Eric Scott Pfeiffer, all add together to come up with a reading experience that I would rate up there with the best offerings of Phillip K. Dick and Isaac Asimov. Both have offered up questions of what constitutes “reality”, and what makes a person a “person”? Boom! Studios has accomplished all of this without resorting to the pseudo-theological mishmash that I felt dragged The Matrix series down into the realm of cinematic fluff (as far as I’m concerned, that series began and ended with the first movie).

Arcadia pulls off one helluva trick, in that it’s both entertaining and thought provoking, without being too heavy handed about it. If you like your science fiction intelligently written, look no further. If you want something without quite so much existentialism included, Boom! also has a great Bill and Ted series you can check out… 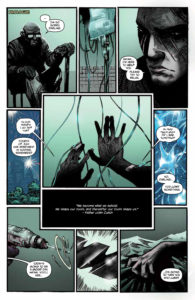 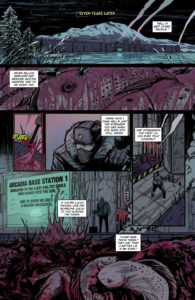 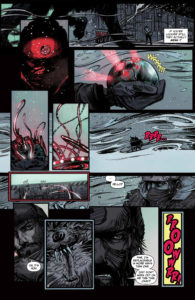 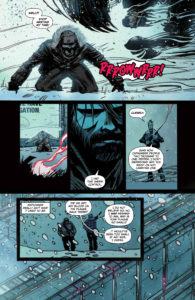 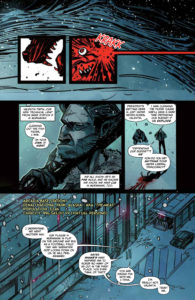 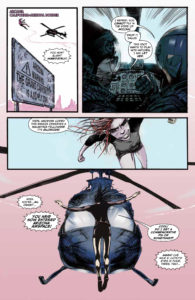 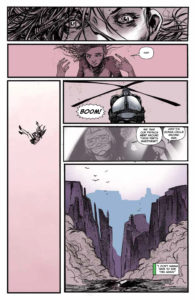 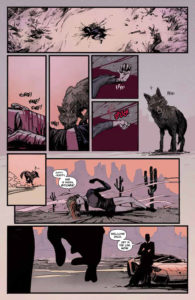 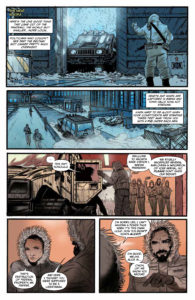 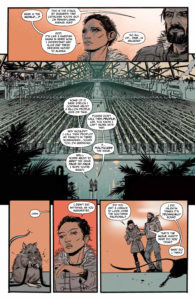