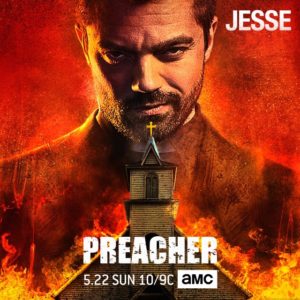 Fulfilling a promise to his deceased father, one-time outlaw Jesse Custer returns home to West Texas to take over his dad’s church. Jesse’s mission, however, becomes twisted when his body is overcome by a cryptic force that unleashes within him a highly unconventional power. Together with hell-raising ex-girlfriend Tulip and Irish vagabond Cassidy, the preacher-in-training embarks on a journey to find God in a world inhabited by holy, hellish, and everything-in-between characters. The darkly comedic “Preacher” is based on Garth Ennis and Steve Dillon’s popular 1990s comic book franchise of the same name. Executive producers include Sam Catlin (“Breaking Bad”), and Seth Rogen and Evan Goldberg (“Superbad,” “Neighbors”).
———-

Years ago, DC Comics started up their Vertigo line of books, aimed at their (relatively) mature readers. Preacher was one of these books, created by writer Garth Ennis and artist Steve Dillon, running from 1995 to 2000. Developing a gigantic fan base, and achieving the rare commodity that is critical acclaim in comic books, Vertigo had a hit on their hands. Even after the series was finished, it lived on in trade paperbacks, in hardcover special editions, and in the hearts of its fans. Even in the beginning there were many out there who believed that Preacher deserved a cinematic treatment, but it never seemed to gain support or momentum with producers.

Fast forward a few years, and you may have noticed that comic books have hit Hollywood in ways that seemed like a dream come true for readers. Finally the Age of the Geek had arrived, and movie studios were doing justice to the characters we love, taking input from the creators as opposed to keeping their own ideas of what they think viewers wanted (Batman with nipples? Seriously). Suddenly, inevitably given its success, there was again talk about establishing Preacher as an ongoing television series. All they needed was a script, a creative team, and a home.

Anyone who’s read Preacher knows that last piece of the puzzle was going to be a tough one. Ideally, a series of movies would have seemed like the perfect fit, because at the time, the only real home for a story the like Preacher on TV would have been on late night cable. Let’s face it, Jesse Custer is a pretty awesome character, but he’s not going to find a place on CBS nestled in after episodes of The Big Bang Theory. Rumors came up, rumors were shot down, and Preacher hung in developmental limbo. Thus began the cycle of false starts, and false hopes, as the title was bounced back and forth. Every couple years, the whispers would hit the internet, and fans would peek out from under their rocks as they dared to believe it could actually happen, that this could be the time, only to have their eternal optimism smashed to bits.

And now, here we are. After the success of shows The Walking Dead, Breaking Bad, and Sons of Anarchy, it became clear that there was a market for television shows aimed at an adult audience, and it was on basic cable. Once again Preacher fans looked up to the sun, hoping to believe, and this time, their faith was rewarded. Granted, there were bound to be changes made to the story, the inevitable subject of complaints from the diehard purists, but understandable given the subject matter. The honest truth is that a book like Preacher would have to be adjusted to work in a screen format of any kind.

And lemme tell ya, there are differences between the comic and the show.

I watched the pilot episode on the night it aired (May 23, 2016). As the big day approached, I’d been finding myself sliding back and forth between completely stoked for the premier, and feelings of nervous trepidation caused by the single burning question: “What if it sucks?” Well it didn’t suck. Aside from the need to pause the TV every once in awhile to explain the goings on to my wife, I divided my viewing time between laughing out loud and jaw dropped “holy crap they actually did that!” (I think I watched Tom Cruise explode five or six times). In short, I enjoyed the hell out of the pilot episode. Part of that could very well come from the fact that even though I’ve read the comic series multiple times, I still have no friggin’ clue where the show is going or what’s going to happen next. I get to experience the story from a new perspective, right along with everyone else, just like the current season of Game of Thrones.

So, what’s different? Holy crap on a cracker, only the entire opening chapter of the story! Literally, aside from there being a guy named Jesse Custer, who happens to be a preacher in a small Texas town, who becomes the host for Genesis, the infant love child of an angel and a demon, the show seems on a track to have very little to do with the comic book. From what I can see so far, where the comic became an extended road trip following Jesse on his mission to call God Himself to task for being asleep at the wheel while the world goes to hell in a hand basket, the television series looks like it’s going to settle down in Annville, Texas for a while and make itself at home.

Preacher Jesse Custer, a man with a dark checkered past, puts honest and heart-felt effort into his role as spiritual shepherd for the people of Annville, but it’s pretty plain to see that it isn’t a good fit. He drinks. He smokes. He swears. Even with all of that, actor Dominic Cooper does a great job of conveying the feeling that Jesse wants to do right by his congregation, but has trouble figuring out how to go about it. This is made even more difficult by the people themselves… some of them are just plain assholes. Jesse understands the fundamentals of faith, how it’s all supposed to work, but he just hasn’t seen much from Upstairs and is beginning to lose faith that anyone is still paying attention to what goes on down here.

Joined in the pilot episode by ex-girlfriend Tulip (played by Ruth Negga, the “girl in the flowered dress” from Agents of SHIELD) and Irish vampire Cassidy (Joe Gilgun in one of those roles that an actor seems born to play), Jesse and company lay the groundwork for a story about earned redemption, for anyone willing to put in the effort. Able to see his shortcomings, Jesse at first comes to the conclusion that he needs to step down as Annville’s preacher. This is plan is put on hiatus when Jesse experiences a revelation in the form of his union with the disembodied Genesis. That Sunday in church, Jesse does confess that he’s been a pretty lousy preacher up to this point, and expresses his sincere and profound apologies to his congregation. Instead of quitting, however, Jesse vows to do everything in his power to set things right in Annville, through the power of prayer and faith in God.

Personally, one of my favorite scenes in the show is earlier on in the episode, and presents the first meeting between Jesse and Cassidy. The scene has Jesse drinking in a bar, faced with an abusive redneck determined to pick a fight. The point of contention is that Redneck’s son had come to Jesse with the news that his father was an abusive husband and Jesse, in his attempts at being a good preacher, had offered his support to the woman. Now, with said angry redneck prodding and looking to show some dominance, Jesse is doing his level best to maintain control. He shrugs off attempts to goad him into some kind of action, ignoring references to his past as some kind of “bad ass”, but Jesse can only take so much. The last straw comes when loudmouth redneck makes a comment about knowing who had let on that he was hitting his wife, and that the “snitch” would pay for it when he got home.

At the mention of impending child abuse, Jesse’s demeanor changes from one of peacekeeper to… something different. He tells the man not to touch the boy, and when prompted to provide the implied “or else”, Jesse clarifies. “Or else” he was going to hear a noise, high pitched and sounding something like a “bunny caught in a trap”, and that he would be the one making it. What follows is a beatdown of epic proportions as the Reverend Jesse Custer digs in and cleans house on the redneck and his friends. The defining moment of Jesse’s character comes about halfway through the fight.

Through the entire episode, right up to this point, Jesse has had the look of a man out of his place and lacking confidence in the role he’s doing his level best to fill. And then, in the chaos of a (very well-choreographed) bar fight, the action slows down and zeroes in on Jesse’s face as it changes from a look of grim determination to one of the most contented smiles I’ve ever seen. In that quick snapshot of a moment, we see Jesse’s true nature, the part he was put on this earth to play; that of a kicker of asses, destined to stand up for the little guy when no one else would, showing wrong-doers the error of their ways through the crucible of pain. How this plays into Jesse’s decision later on to be the best damn preacher he can be remains to be seen.

So where Preacher the Comic Book pretty much has Jesse Custer leaving his hometown behind after he becomes the host for Genesis in the opening pages of the first issue… not much of a choice as the arrival of the infant bastard child levels the church and kills everyone else in it… Preacher the Series looks like it’s going to stick around Annville for a while. Characters who had nothing to do with Jesse in his pastoral role (ie: Cassidy and fan favorite Arse Face to name two) are being weaved into this new iteration much earlier on than they were in the comic. Also, where before Jesse had no knowledge of Tulip’s life as a professional hit-woman, he now not only knows about it, but he’d also worked with her before answering His Call.

It should be noted that, just like with The Walking Dead’s creator Robert Kirkman, the creators of Preacher, Ennis and Dillon, are involved in the show as producers. Jesse and company couldn’t be in more loving hands, and I think we can all take heart in that. Maybe don’t “open your heart”, though (if you watched the show, you got that…). That’s a little over the top.

So if you’re one of the purists who’s going to bang the gavel of self-righteous indignation over what AMC is doing to your beloved comic book property, take some heart. As a fan, I think that the show matches the spirit of the comic in every way that matters. We already see Jesse’s suspicion that God isn’t really paying attention to what’s going on down here, and the early stages of his anger over that lack. The characters are still the characters we loved, they’ve just been moved around a little bit to give a fresh take on the story. Whether that trend continues, and if it does AMC is going to be looking down some pretty dark roads, remains to be seen. 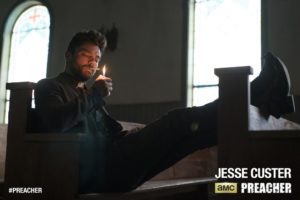 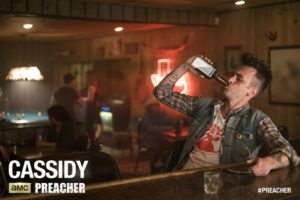 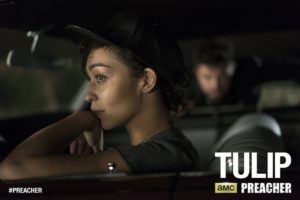