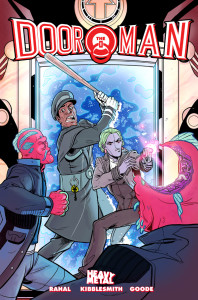 Welcome to the Universe.
Every populated planet as a DOOR.
Those who operate the DOORS are known as PORTERS… Interplanetary doormen who usher visitors from world to world.
No one remembers who built the DOORS or why. The Porters guard the knowledge of how the DOORS are operated, sharing their secrets only with the apprentices who are to replace them.
And a Porter never leaves their post.

Henry Clay Waters is The Doorman of Earth and hasn’t had an interstellar visitor in decades until… his last day on the job when an extraterrestrial assassin darkens his doorstep. Saved by the neurotic alien Detective Flower, the two must team up to solve the galaxy’s biggest mystery or get killed trying!
———-

Henry Clay Waters has been on the job for forty-five years. In that time, he’s followed every rule and bylaw laid out by Porter’s Union, including “Porters Code 4-C: Admission of a hostile entity onto the Homeworld”, but especially “1-A: A Porter doesn’t leave his post.” It has been the defining characteristic of his life, this dogged determination to uphold the tradition of excellence followed by Porters across the galaxies. And then, on his last day before retiring, he opens the DOOR to find a gun in his face.

To the rescue comes Detective Flower of the Confederation of Systems Police Department. She’s uncovered a plot to kill off the Porters. Against orders from her commanding officer, she’s taken it upon herself to investigate this plot, and to save the Porters. So far, she’s been less than successful, but for the first time she’s arrived before it was too late. Determined to prevent the attempted murder of a Porter (ConSyst Statute 3927-E: “The attempted murder of a Porter”) and track the pan-galactic murder spree to its source, Detective Flower will recruit Henry Clay Waters, Porter of Earth, to the cause.

In the spirit of great stories like Men in Black, The Doorman takes the mundane and makes it extraordinary. We’ve seen them, standing their posts in front of high class apartment buildings, pricey hotels, and bajillion dollar businesses. There to keep the riffraff from getting into places they don’t belong, they’re the first line of defense, stalwart constants as much a part of the environment they work in as the very doors they guard. How much more important, and yet infinitesimally smaller, could the doorman be if it wasn’t just a building he was guarding? Take that same workaday attitude, and add the layers of secrecy, the level of dedication and duty it would take to man the one DOOR that gives access between your world and the rest of the inhabited universe!

Henry Waters has spent his entire career as the Porter for our planet working in silence. The people of Earth aren’t aware of life “out there”, and it’s his duty to help ensure that it stays that way (“67-C: Admission of an alien entity without human disguise”). He speaks to no one, and Earth being the comparative backwater that it is, his DOOR doesn’t see much traffic. His days have been spent in relative solitude, with only the knowledge of the truth behind his career to keep him going. Now Henry finds himself not only fighting for his life, but also for the sanctity and security of the DOORS everywhere, and for the lives of his fellow Porters.

If no one is left to guard the DOORS, no one there to hold the Key, what’s to prevent anyone from entering with bad intentions?