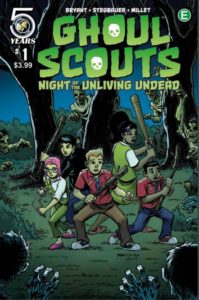 Here’s the problem with all-ages books today. They’re written for first graders. Not even particularly smart first graders, only those 6-7 year-olds who have just grasped the importance of reading all the pages of a book in order. There are lots of rainbows and spunky kids and things that are pink. Everyone over the age of 10 looks like an adult, and occasionally a bored writer or artist will throw in something inappropriate, knowing that it will make a parent smirk as they check out their kid’s book choices.

Now throw all that out, because that’s not what Ghoul Scouts is about.

Something weird is happening in Full-Moon Hollow on the night of the Wilderness Scout jamboree. It’s not every night that your campsite is invaded by zombies and you have to run away from them, right into a trap set by a couple of resourceful Gaia Scouts. The five scouts decide to join forces and head back to town.

In the first issue, Bryant sets up the town and the cast of characters and gets them working as a team. The story moves along quickly and the kids are really good kids. They’ve just barely noticed the opposite sex, and then always as “that girl who struck me out in softball,” or “the boy who made the really awesome volcano that covered the room in red dye.” Right now, they have a problem to solve, and they’ll work together to do it. There are no adults on this journey until much later, and while the kids sometimes get scared, it’s not “scar you for life” scary. They put clues together and work as a team without being spoon-fed each part of the story. It’s SMART, like a Harry Potter book or the delightful Oddly Normal. Looking forward to seeing more from Bryant in the future.

Stegbauer’s art is a joy – his style isn’t manga but nods in that direction just enough so fans of that style will find it attractive. The kids themselves actually look like kids; not adults drawn smaller or some Hollywood idea of kids. Actual kids. Some are short. Most are skinny in that “I haven’t quite grown into my feet yet” way, and again this is all a good thing. Nothing is static or feels posed – like kids of this age, they are always moving and doing things, even when resting or just talking. After years of seeing Stegbauer’s inks over other artists’ pencils, it’s nice to see a full book of his artwork to finally see just what a skilled storyteller he is.

Excellent work by the coloring team of Millet and Browne, as they managed to make a mostly dark setting have life and color. I especially liked the campfire scenes, where there is glow on faces one minute, and then they walk away from the flame and are in shadow. Plus, the only regular pink is Becky’s hair, and as a seventh-grade tween I’ll cut her some slack.

As an added bonus, these guys got about 1400 of their artist friends (or 12 – it’s so closes!)  to do alternate covers beyond what Mark Stegbauer does for each issue.  Best just order them all.

While the aim of this series is an all-ages book, it doesn’t pander to the target audience. It’s a good read for comic lovers of any age, because this is just….fun. Enjoy it. I know I did. 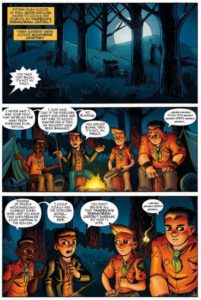 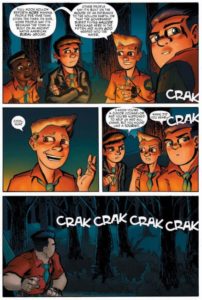 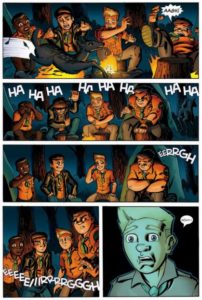 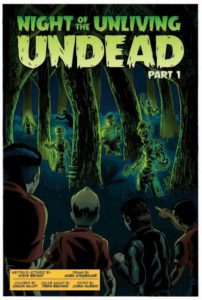