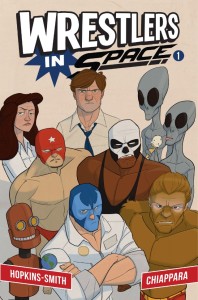 This is the first issue in an ongoing series, Wrestlers in Space is a Comedy/Sci-Fi/Adventure about four Luchadores lost in space. Finding their way home through strange surroundings and causing havoc for the universe along the way. Join the team as they make friends and enemies while they desperately try to get back to earth.
———-

The Matador Luthor Lobo has life by the horns. He’s beloved by his fans, particularly the women, and most particularly himself. He takes great pride in his conquests, both in the arena and in the bedroom, going to great lengths to ensure his legend continues. The guy even has cards he leaves at the bedside, proclaiming “You have spent a night with The Matador”, just to make sure the women he sleeps with remember.

And as it goes with all good things, Luthor is destined to crash and burn in an epic fashion. He sleeps with a beautiful young gypsy woman after a match, a woman who gets a promise of fidelity out of him beforehand. In the morning, when she wakes up to find him gone from their bed, directly into the bed of another, she’s understandably furious. She goes to her mother for comforting, and is told that everything will be taken care of… Mothers know best, right? One gypsy curse later, and Luthor Lobo is transformed from The Matador into The Werewolf. On the run from a society who now sees him as a monster, where will Luthor go for help?

I know what you’re wondering… You’re asking, “Hang on, buster, we were promised Wrestlers. In. Space.” I know, because I was right there with you. But see, there’s a second story included in this opening issue, and it sets the stage for intergalactic luchador action.

Three space aliens owe another space alien a lot of money. A LOT of money. With nowhere to turn, and no way to raise the kind of cash it would take to pay off their gambling debt, they come to an inevitable conclusion… GAMBLING. Setting their sights on Earth, the three make their way to this Big Blue Marble, and the collision course with destiny (also, “Wrestlers in Space”) is on the horizon.

Wrestlers in space is a completely ridiculous concept, one that should in no way work… And despite/because of that, it works impressively. Nathanael Hopkins-Smith has concocted a premise ripped from the Saturday morning serials of old, and made it his own. The fact that he’s taken a full issue to set up backgrounds before getting to the payoff promised in the book’s title gives me hope that this will be more than just flash in the pan title. It’ll be interesting to see, too, if future issues stick to the format he’s started here, the first part of the comic dedicated to backstory and the second presenting another chapter in sort of a “Then and Now” format. That the two chapters are presented by different artists with very different styles benefits the reader greatly, as the artistic styles from Francesco Chiappara in the first part, and Jim Smith in the second, set the tones for each story beautifully.

I have a lot of hope for this title. I like my comics varied and different, and Wrestlers in Space is off to a great start on that point. 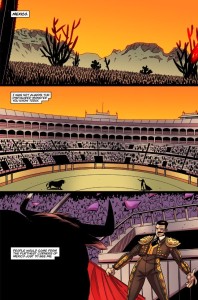 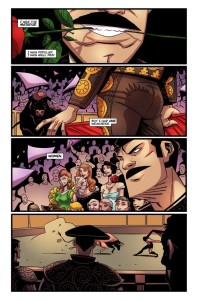 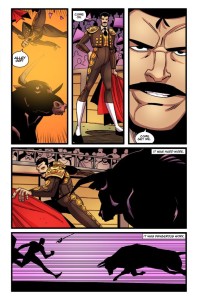