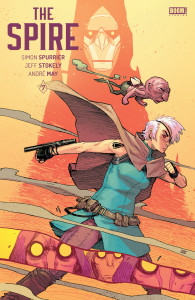 The Spire is a mountain of metal and stone that rises out of the middle of the desert, containing a vast city of twisting tunnels, grinding elevators, ancient machinery, and is home to over a million human and non-human residents. Shå, the last of the Medusi, is responsible for keeping watch over them as Commander of the City Watch, despite the fact she isn’t shown any respect due to her race. When a string of grisly murders is committed just as a new Baroness of the Spire is about to be sworn in, Shå will have to find the serial killer and bring them to justice. But the new Baroness has a deep hatred of non-humans, and Shå will have more than one enemy at her back.
———-

Having missed out on the start of this eight issue run, I indulged in a little bit of binge reading and was rewarded with an introduction into one of the most detailed and strange worlds I’ve seen created for comics. Not only is this world created and populated with fantastic characters of all shapes and sizes, but it’s also brought to life without excessive amounts of narrative and exposition. The reader is allowed to learn about the world naturally and over time through character interactions, in an outstanding example of the too often neglected adage in writing, “show don’t tell”. Unfortunately, I don’t have the time to do the same here. Bear with me for a bit, and I’ll do my best to sum up the story so far…

The titular Spire is a bastion of human civilization in the middle of a poison-aired wasteland. Outside the Spire, the only beings able to inhabit the wastes are the Sculpted… but inside the Spire itself, the Sculpted are given the less than complimentary slur “skews”. The Sculpted are represented inside the Spire itself, some attaining a measure of success despite varying degrees of hostility and prejudice experienced at the hands of the human populace. The ruling Baron had gone to great efforts to overcome this bigotry, doing everything he could to set a better example, even going so far as appointing Sculpted citizens to official positions within his city. Sadly, the old Baron passed away, and was succeeded by his less than progressive daughter.

In the midst of the young Baroness’s rise to power, the Spire finds itself in the midst of an upheaval. Several seemingly unrelated but still noteworthy figures have been killed in cold blood, their eyes surgically removed for purposes unknown. On the case is Ska, a Sculpted member of the Medusi, a “skin changer”, and Captain of the Spire police. Ska is drawn into the murder investigation, and it doesn’t take long for her to figure out that the killings go much deeper than mere crimes. The case quickly gets mired in an old conspiracy, layered and long hidden, that seems to center around Marchioness Juletta, the Baron’s widow and mother to the new Baroness and her younger sister Meera.

How all of the victims are tied together, and how they’re connected to religious zealot Zoarim delegation seeking a “Pax” (truce) with the ruler of the Spire, sets this series apart from other books. That, and the ability of writer Simon Spurrier to craft a layered whodunit that actually keeps its secrets from the reader until they’re ready to be revealed. Under his control, this mystery doles out clues like Scrooge would a halfpence, one grudging bit at a time. Paired with the artwork by Jeff Stokely, and colored by Andre’ May, The Spire is an outstanding example of revealing a new and bizarre world one comic panel at a time, and giving enough respect to your readers to let them discover it all on their own as the story unfolds.

There is a true history behind The Spire, fully realized and intricately detailed, and it would take countless issues in comic form, or multiple novels to cover it all. There are glimpses of and references to technologically advanced “Antiki” items amidst the relatively low tech setting, hinting at a lost world that came and went before. What created the wasteland, and how did the Sculpted come to be so different from their human counterparts? All questions that take nothing at all away from the story at hand. If nothing else, they only serve to feed an active reader’s imagination, as he or she fills in the blanks on their own.

The best part of reading The Spire has been in peeling back the layers, and with each book another piece of the puzzle falls into place… just in time for the end of the issue. If this hadn’t been a binge read, I think the frustration of catching each “aha!” moment right at the last page, knowing that I’d have to wait for the next issue for the next piece or to find out if I was right, would have been brutal. As it is, the wait for the crescendo of issue 8 is going to be rough. 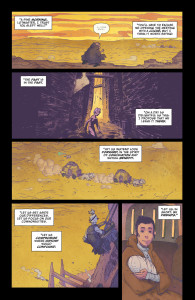 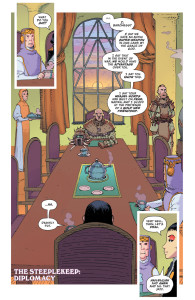 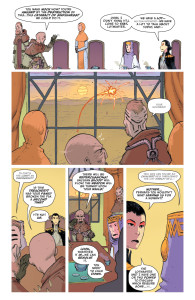 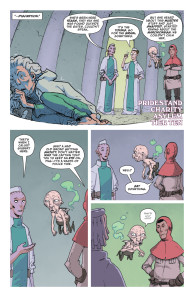 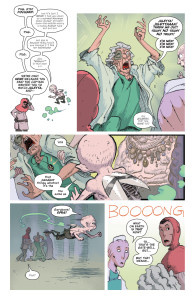