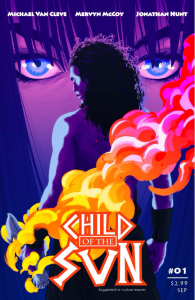 Child of the Sun is a very loose adaptation of the biblical Samson mixed with some other biblical tales, biblical legends, and ancient biblical fiction. The story focuses on the first half of Samson’s life: before Delilah, before the fall, when his power and confidence was at its height. It is also a love story between Samson and the little known wife of his youth.
———-

In its prologue, Child of the Sun introduces the reader to Apophis, general of the People of the Sea. Through violent and bloody images, we follow his progress in battle from Thebes, to Ugarit, to Hatti. Sparing no one, Apophis is rendered as a driven and merciless warrior. What isn’t made clear, yet, is his goal.

The next introduction is to an individual who by all accounts, particularly his own, doesn’t need one. The mighty Greek hero Heracles is in his element, surrounded by an adoring crowd as he performs feats of strength and prowess in battle. The wine flows, and daughters are offered up to Heracles’s massive ego, with no hope of satisfying him in either regard. Finally bowing to the massive quantities of wine he’s imbibed, Heracles is found stumbling in an alley by a cloaked figure. When offered some wine in a toast to Zeus, this figure states that he doesn’t do either… drink or worship Zeus. An incredulous Heracles asks the stranger for his name, and lowering his hood the impressively long-haired man identifies himself as Samson.

Here we have two of the strongest men ever written about, both tied to very different sets of religious beliefs. The story seems to be working up a slow build to, I’m guessing at this point, a clash between Samson and Apophis. At first I wasn’t sure what I thought about the layout of the book, the differing artistic styles used as it switches from black and white to color and back again. Lastly, the odd bromance love triangle going on between Heracles, Samson, and Adriana was a little confusing. Then I had an ephiphany (yeah, it kinda hurt). Child of the Sun is contrasting the personalities of young idealistic Samson against the older and more jaded Heracles. Samson loves Adriana, a priest to the love godess Astarte to the point of obsession, despite her often indifferent attitude toward his devotion. Samson seems doomed to be stuck seeking advice from Heracles, who can’t seem to understand why the young buck would want to be trapped in a relationship with only one woman.

The art is pretty solid, very often bordering on the beautiful, particularly when on the pages in which color is used. The action is pretty straight forward, none of these individuals being particularly subtle as they go about their business. I can say that this mix of iconic and legendary figures has me curious enough to want to make a recommendation, with a caveat that more conservative Christian readers might have some issues with the liberties taken in this fictionalized account of Samson’s younger days. I really want to like this book. I’ve had the chance to read the first four issues in this series, and although it isn’t an “action packed” book, despite the presence of two of religious history’s most famous warriors, it still has enough going on to keep bringing me back to it. 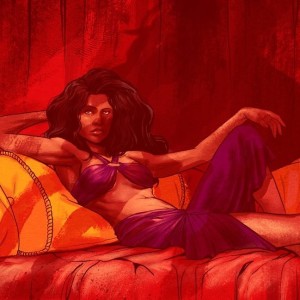 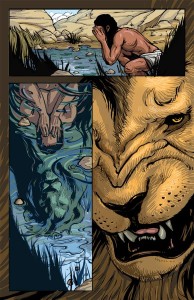 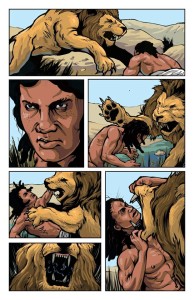 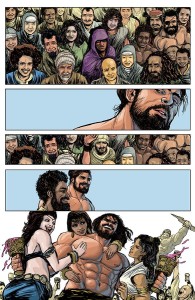