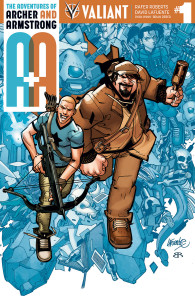 GET SMASHED…OR BE SMASHED! Valiant’s (somewhat) dynamic duo are going “IN THE BAG” for AN ALL-NEW ONGOING SERIES from rising star Rafer Roberts and comic book superstar David Lafuente!

Meet Archer: A sheltered teenage martial arts master and expert marksman that was raised for a single purpose – to kill the devil incarnate. Little did he know that this undying evil was actually Armstrong (he’s actually a pretty good guy…once you get to know him) and, since hitting the road together, the two have become great friends and even better partners.

Imprisoned in Armstrong’s satchel for centuries, Bacchus now commands a legion of monsters, goblins and golems bent on escaping back into the world of man and enacting revenge on their captor… Can Archer single-handedly combat the godly embodiment of intoxication himself – and rescue his best buddy – without becoming lost amongst Armstrong’s endless repository of bizarre artifacts and historical oddities in the process?
———-

In 1953, the immortal Aram Anni-Padda, now going by the name Armstrong, helped a friend Frank retrieve some lost property from a restaurant called “la Facciata Mafiosa”… literally Italian for “mafia front”. In retrieving his friend’s lost item, Armstrong comes across a crate of Lagavulin 1907, a rare and extremely valuable vintage of wine which Armstrong describes as “perfection in a bottle”. Being the lifelong hedonist (remember, he’s immortal so that’s really saying something), Armstrong promptly deposits the wine into his satchel. Being mystically enchanted to contain an entire world unto itself, many things have found their way into this satchel, and remain there until Armstrong has need for them.

So it is that in the present day, Armstrong sees the obituary for Frank. This dredges up memories, and in a mood to reminisce, Armstrong tries to retrieve the Lagavulin 1907 from his bag. Generally, that’s not a problem, but in this case his attempts go without success. Not to be denied a taste of this all but lost vintage, particularly as Frank was the last person with whom he’d partaken of it, Armstrong ties off a rope and climbs into the bag in search of his lost wine. When young Archer comes along to check on his often drunk friend, he finds a room full of lizard men attempting to escape from the magic satchel, but no Armstrong.

Of all the Valiant titles, many of which are excellent, Archer and Armstrong has been my personal favorite. Being a sucker for the “buddy movie”, it hits the mark for me on multiple levels. In every movie featuring mismatched individuals who go on to be fast friends, there’s the aspect of complete polar opposites hitting it off. Armstrong, aka Aram Anni-Padda, has been partying his way through the centuries for the last 6,000 years, and has yet to find a category of debauchery he doesn’t like. Archer is a teenager still coming to grips with life outside of the uber-religious cult compound where he was trained in multiple forms of martial arts and assassination techniques. I think you’d be pretty hard pressed to find two characters who more fully embrace the concept of “polar opposites” than these guys.

The other aspect that really sets Archer and Armstrong apart from the herd is that regardless of the consequences, despite the gravity of any given situation, there’s always the sense that these two are really just off on a spree, having a good time amidst the chaos and mayhem. The writing has always been witty and sharp, and Rafer Roberts holds up that standard perfectly. The banter between Archer and Armstrong gave me a few “laugh out loud” moments.

I haven’t totally made up my mind about the artistic style of Lafuente, but that’s nothing against him. It’s just a little odd that Obadiah Archer looked like he’d stepped right out of the Archie Comics. Another sticking point is in the fight scenes… One of the traits of Archer and Armstrong is in Archer’s fighting style. He’s mastered multiple forms of martial arts, to the point where he’s able to pick up and utilize new techniques after simply seeing them executed once or twice. To highlight this, Obie’s fights are generally accompanied by information text boxes that identify the technique he’s using, and give a little background on the system or style it comes from. In at least one of the scraps in this issue, those text boxes didn’t match up with the action… Obie’s throwing an elbow, and the text proclaims that he’s using “Judo, a form of martial arts k nown for throwing one’s opponent”, and the next panel shows what looks like a backfist that’s identified as a “straight punch”

Okay, I get it… I’m nitpicking. I’m willing to cop to the fact that I’ve gained enough knowledge, as a participant and a spectator (MMA for the win!) that little things like this stand out. I’m also willing to fess to a certain amount of OCD in this matter, and my expectations may not be the most reasonable.

With these facts in mind, I would like to point out that The Adventures of Archer & Armstrong looks to be a very entertaining series in the making. In their previous exploits, Archer and Armstrong have taken on the likes of domestic terrorists and various fanatic elements. By tossing the duo into the bizarre world of Armstrong’s magic satchel, all bets are off. Anything and everything is on the table, story wise, and this can only be a good thing for readers.

I like my madcap adventure stories free-flowing and with a liberal dose of whimsy (just ask my wife… I got whimsy oozing from my pores), and Valiant is looking to deliver.

… did I mention that they have their own beer? Look for Archer and Armstrong Pale Ale from Valiant and Arcade Brewery! 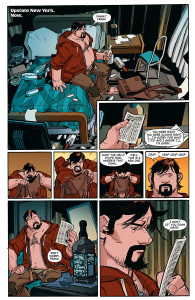 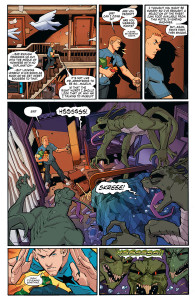 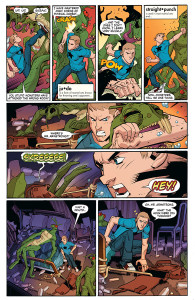 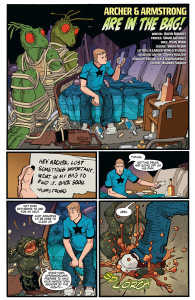 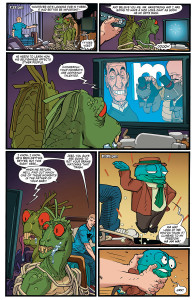 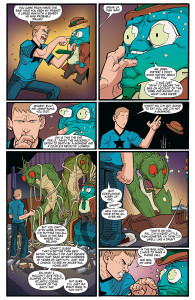