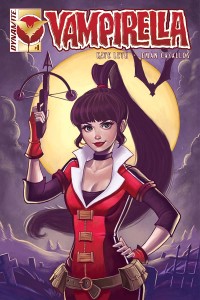 Vampirella takes Hollywood in this new adventure of the classic demon-hunting, monster-slaying, thrill-seeking vampire queen. When her stately manor is attacked, she begins to unravel a plot as old as the silver screen, discovering what monsters really lurk in the shadows of the City of Angels. Writer Kate Leth (Adventure Time, Edward Scissorhands) says, “Can Vampirella be both a cult icon on the rise and take down an empire of ghouls and ghosts? Signs point to: Hell, yes!
———-

Hollywood. City of Dreams. Home to the stars, where the hopeful go to make their names and their fortunes, amidst the glitz and glamor of the entertainment elite. It’s also where a group of opportunistic monsters have set up shop, in the guise of a minor production company in need of talent. They find young talent, lure them out into the middle of nowhere to be extras in a horror movie, and then release the mask that hides their true intent. The “extras” aren’t actually part of a film, they’re part of the buffet.

I forgot someone… Hollywood is also the new home of Vampirella, vampire from outer space who’s taken up residence in a supposedly haunted mansion in the Hollywood Hills. She’s looking to recreate herself, to avoid the limelight, to live a quiet and simple life. Well, quiet and simple relative to what she’s done in the past. Gone is the skimpy red bathing suit, and in its place is a more reasonable outfit reminiscent of something a Tomb Raider might wear.

Vampi’s not alone. Tristan, her werewolf boytoy, and Coleridge, her man-servant/confidante, are her loyal companions. Neither seems convinced of her ability to keep the profile low, but are willing to back her up as she gives it a shot. And as with all well-laid plans of vampires and demons, the peace and tranquility is shattered… along with a really expensive looking bedroom window… when the inevitable attack comes. With a cry of “Die, vampire scum!”, her masked attacker seemingly self-destructs rather than admit defeat at her hands.

The attacker leaves behind nothing but a puddle of rapidly dissolving goo, and a business card advertising “Slade- keeping Hollywood horrific since 1931”. With that, Vampirella finds herself in the middle of the last thing she wanted: trouble and media attention. The latter takes the form of an opportunistic member of the paparazzi, happily snapping away with a camera while Vampi fights for her life.

Beginning the investigation into “Slade”, Vampirella seems to be on a collision course with the same folk responsible for the fake horror movie massacre. Given that we don’t know much more than she does about the mysterious “Slade”, his or her true nature, or the reason behind the attack on Vampirella, all we can hang onto is the hope that when it happens, it’s a battle worthy of one of the longest standing horror icons in comics.

Don’t let the “Monster High” styled cover art fool you… Vampirella is anything but ready for airing alongside the Vampire Diaries. The themes are mature, the violence is brutal and yet not over the top. It should be interesting to see the apparent new direction that Dynamite’s creative team has in store. So far, I don’t dislike what I’ve seen… That may not be a resoundingly shining endorsement, but it’s a start. This intro to the new series is a great starting point for new readers, and should be able to bring the old readers along for the ride. Hopefully, Vampi keeps her legs under her and continues on with her longstanding tradition of horror, camp, action, and… ahem… interesting outfits.

I should point out that the aforementioned skimpy red bathing suit does make an appearance in this issue… because you can’t totally abandon the classics.