“THE SUMMER OF 4001 A.D.” is coming…and, soon, the countdown to the most ambitious comics event of 2016 is starting in a store near you!

As revealed today at the 10th Annual ComicsPRO Membership Meeting in Portland, OR, Valiant has just debuted a wealth of new details and unseen artwork for “THE SUMMER OF 4001 A.D.” – Valiant’s much-anticipated event initiative beginning on May 4th in 4001 A.D. #1 (of 4) by New York Times best-selling writer Matt Kindt and superstar artist Clayton Crain!

In addition to the first lettered look inside the first issue of Kindt & Crain’s staggering 41st century event series, Valiant has also unveiled first word on the official 4001 A.D. TIME CAPSULE – a mysterious, retailer-exclusive offering encapsulating a treasure trove of exclusive surprises and captivating artifacts from the future of the Valiant Universe! Arriving in advance of 4001 A.D. #1 (of 4)‘s May 4th on-sale date in comic shops throughout the United States and Canada, the 4001 A.D. TIME CAPSULE is built specifically for retailers to display in their stores or on their countertops throughout “THE SUMMER OF 4001 A.D.” The key to unlocking this one-of-a-kind mystery item will only be provided upon the arrival of 4001 A.D. #4 (of 4) – the final chapter of Valiant’s blockbuster event series – in late August 2016.

“With 4001 A.D., Matt Kindt and Clayton Crain have a created a massive new frontier for the Valiant Universe – one that is brimming with massive developments for our most well-known heroes, all-new characters to accompany them, and ideas so big that they couldn’t be limited to just one series or even the comic page alone,” said Valiant Publisher Fred Pierce. “In fact, we’re so excited to reveal what the future holds for 4001 A.D. that we wanted to bring that same level of anticipation to fans all over the country with the 4001 A.D. time capsule. All summer long, we’ll be releasing teases about the incredible secrets that these unique items contain. Let the speculation begin!”

Encompassing the core 4001 A.D. event, the return of Valiant’s acclaimed RAI ongoing series, and four all-new one-shots revealing the future incarnations of the Valiant Universe’s most iconic heroes, “THE SUMMER OF 4001 A.D.” is the biggest and most visionary Valiant event to date – and a perfect introduction to the largest independent superhero universe in comics today. Each chapter of “THE SUMMER OF 4001 A.D.” is designed for maximum accessibility and can be read in concert with the core 4001 A.D. series or stand on its own for a new vision of the future of the Valiant Universe.

The fight for the future begins on May 4th in 4001 A.D. #1 (of 4) – the FIRST ISSUE of the all-new, standalone event series following Rai and the 41st century’s most formidable heroes into the fight against New Japan from New York times best-selling writer Matt Kindt (DIVINITY II) and superstar artist Clayton Crain (RAI)!

Then, “THE SUMMER OF 4001 A.D.” explodes out of the pages of 4001 A.D. #1 (of 4) with the return of Rai’s award-winning ongoing series in RAI #13 – the FIRST ISSUE of an ALL-NEW JUMPING-ON POINT revealing the origin of New Japan and its very first guardian! Discover the secrets behind 4001 A.D. here as New York Times best-selling writer Matt Kindt (Mind MGMT) and acclaimed artist CAFU (UNITY) unearth the answers that have eluded mankind for nearly two millennia. How did New Japan come to orbit Earth? Who created Father? And what happened to the nine previous Rai that once swore allegiance to his empire?

Plus: “THE SUMMER OF 4001 A.D.” escalates even further as an all-star cast of superstar talents come aboard to reveal what the 41st century holds for Valiant’s most iconic heroes in a new series of four indispensable one-shots! Featuring X-O Manowar, Bloodshot, Shadowman, and the debut of an all-new, top-secret character with a crucial tie to the present and future of the Valiant Universe, “THE SUMMER OF 4001 A.D.” erupts into full force here with four new chapters from Valiant’s most acclaimed creators:

Earth must rise. Father must fall. Rai! Eternal Warrior! X-O Manowar! Bloodshot! Shadowman! Geomancer! And more! The war for the ultimate fate of humanity begins in 4001 A.D. #1 (of 4) by superstar creators Matt Kindt and Clayton Crain – and continues in May and beyond as “THE SUMMER OF 4001 A.D.” rages on…and changes the future of the Valiant Universe for all time! 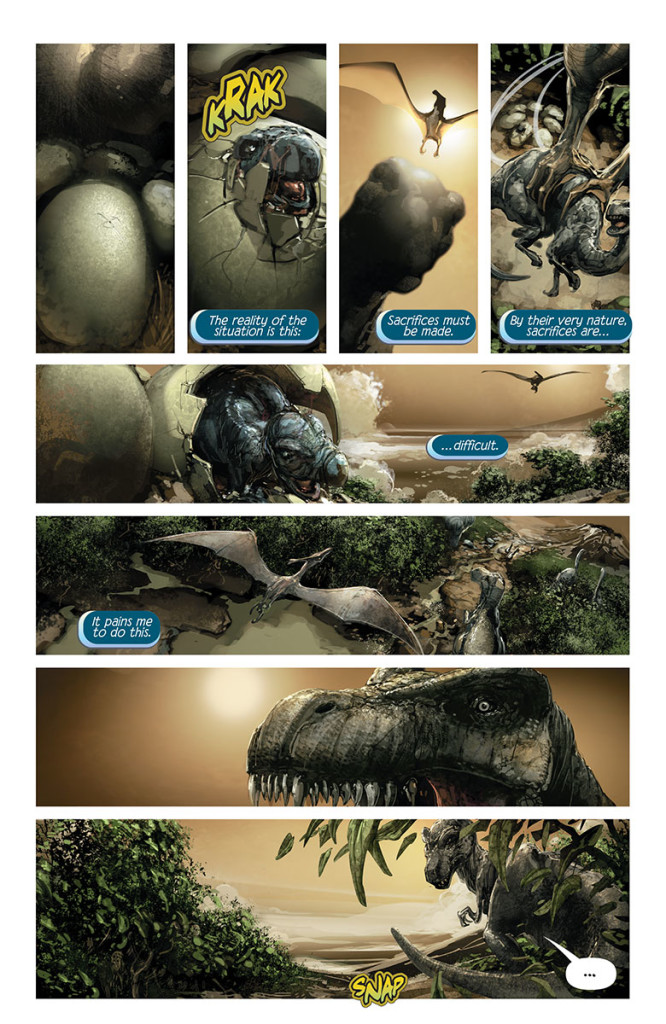 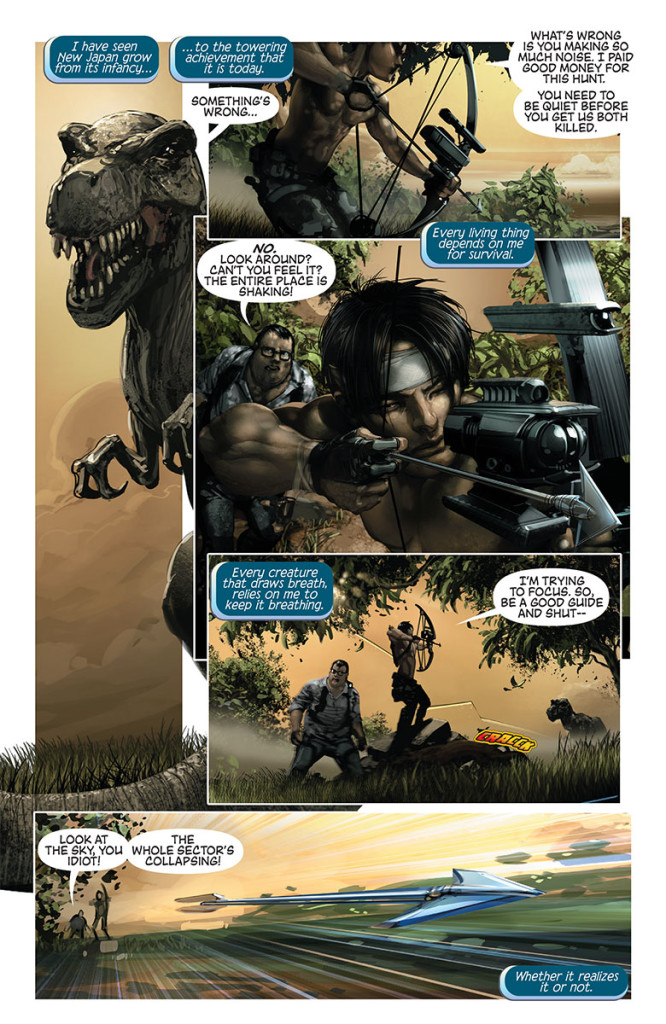 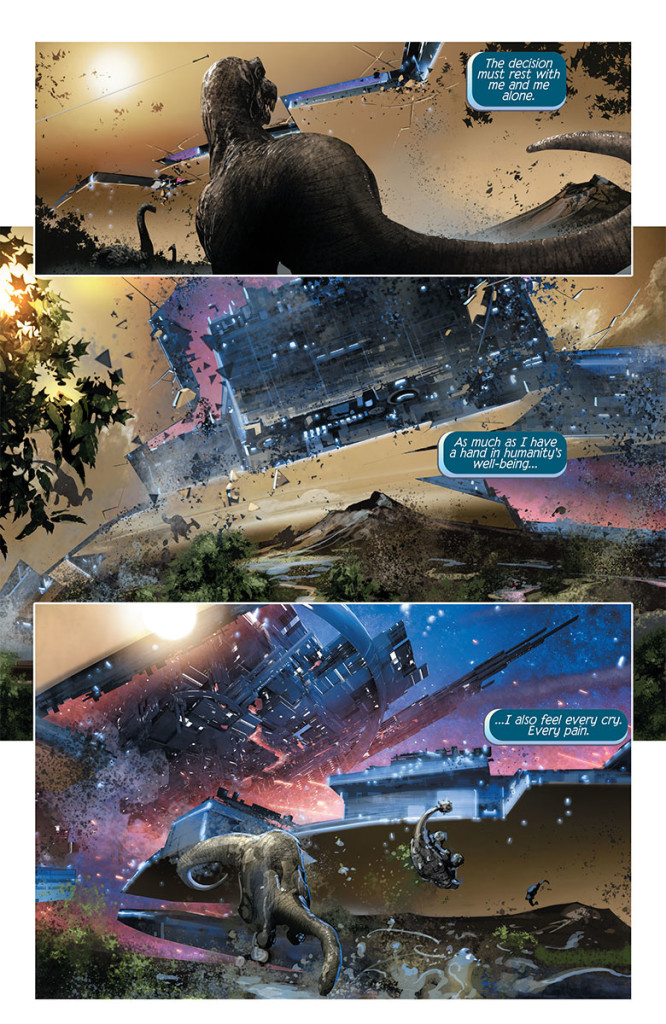 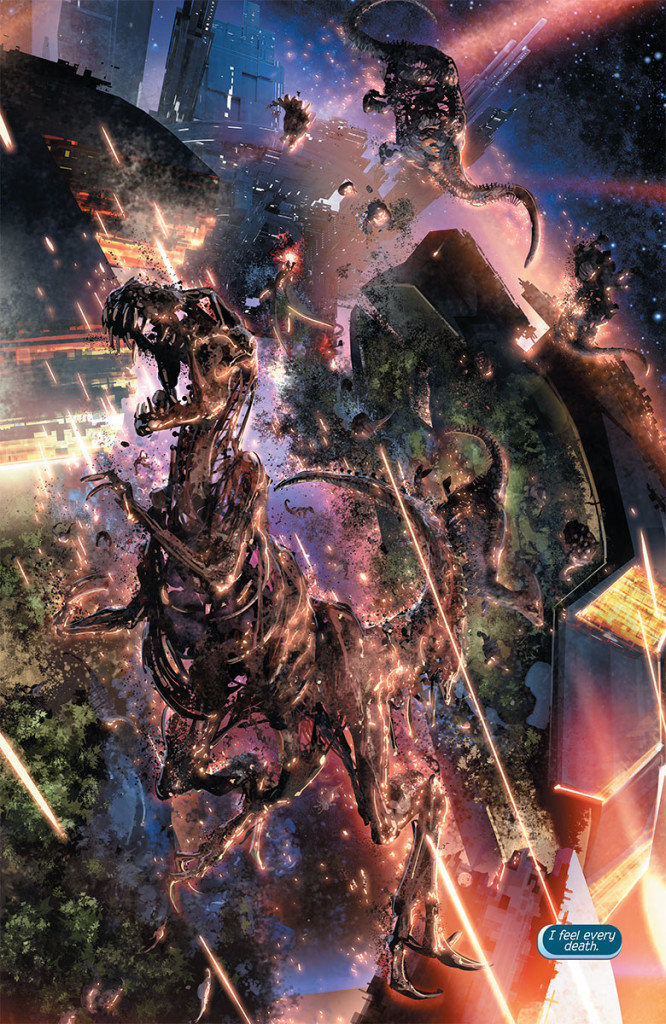 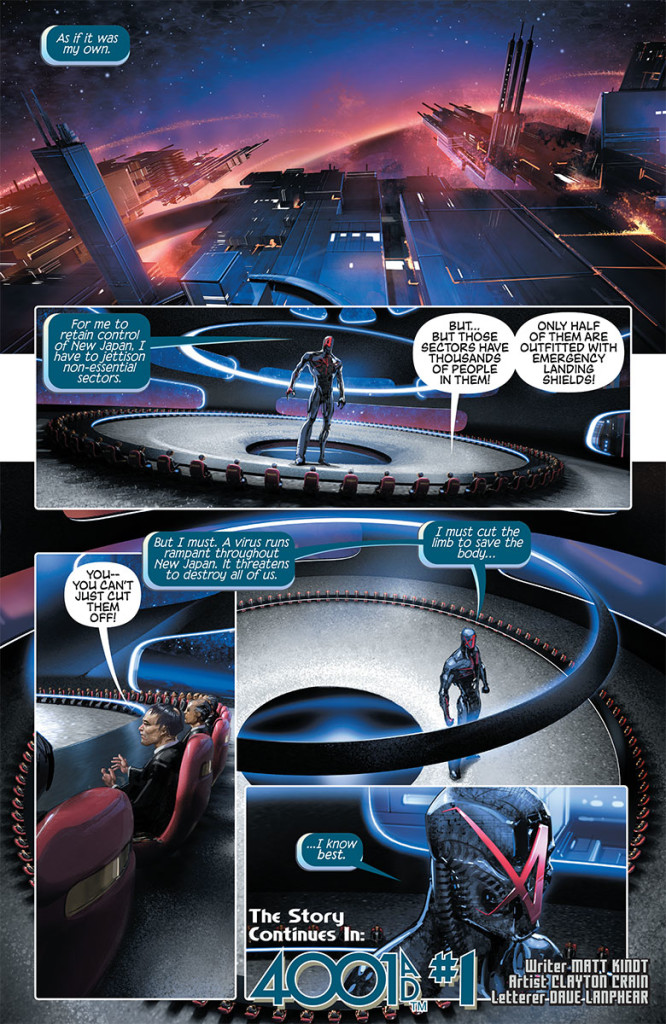 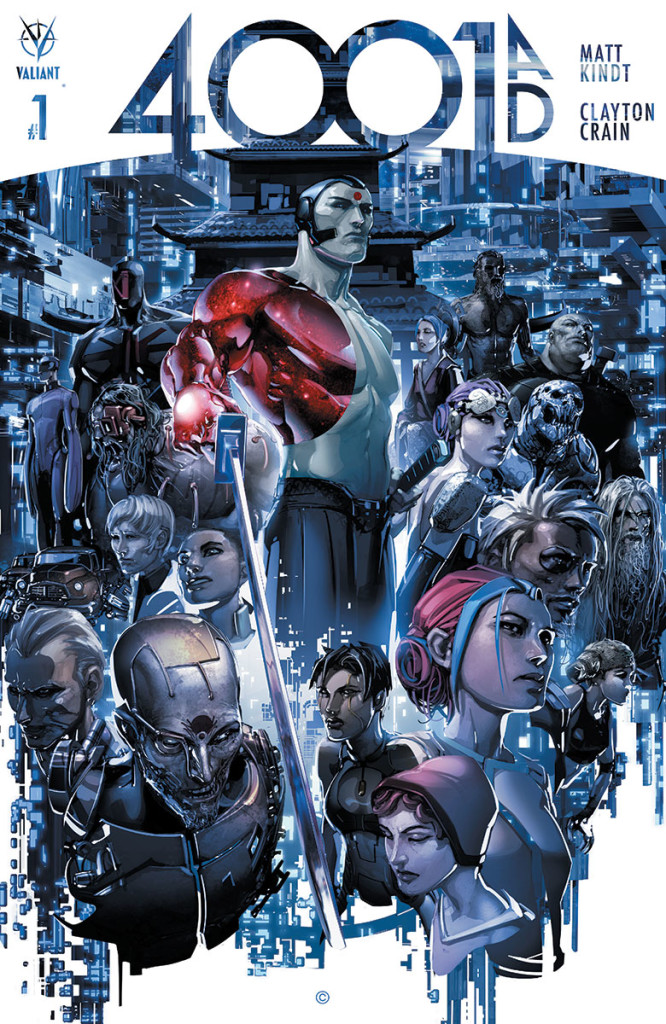 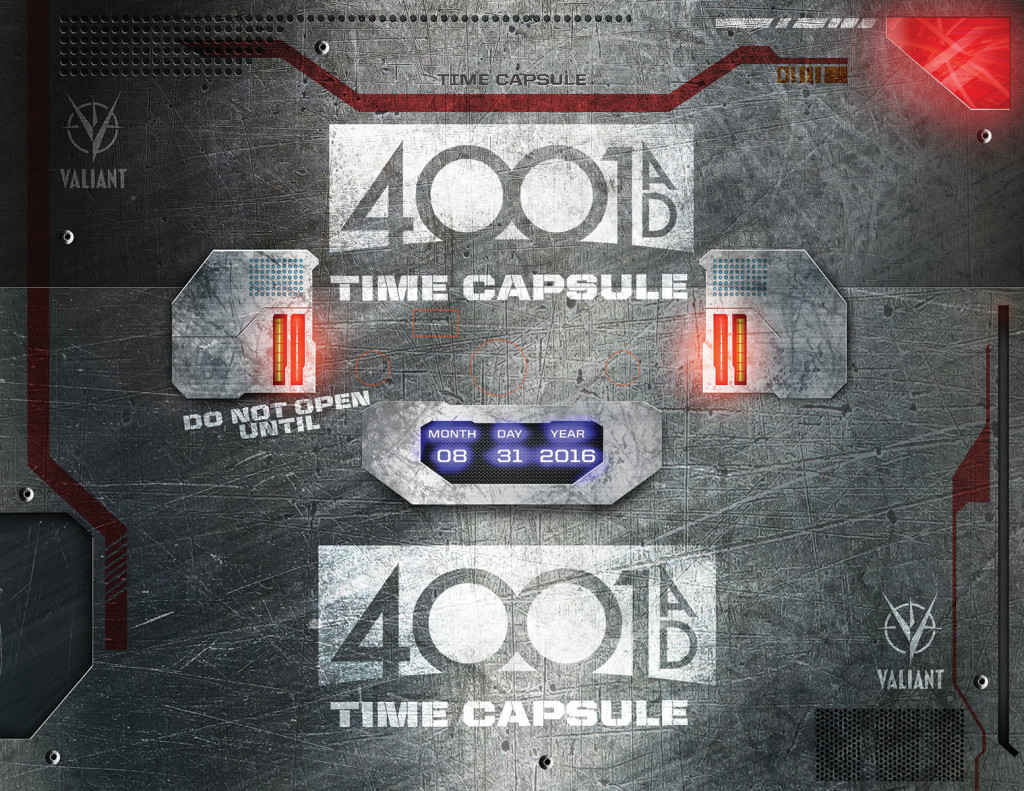 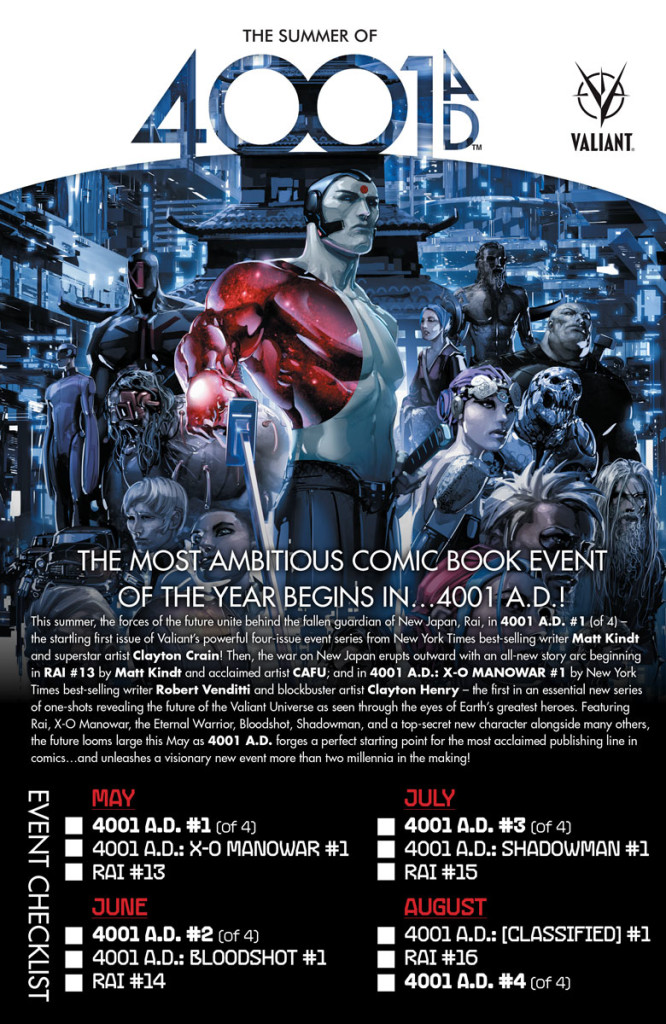 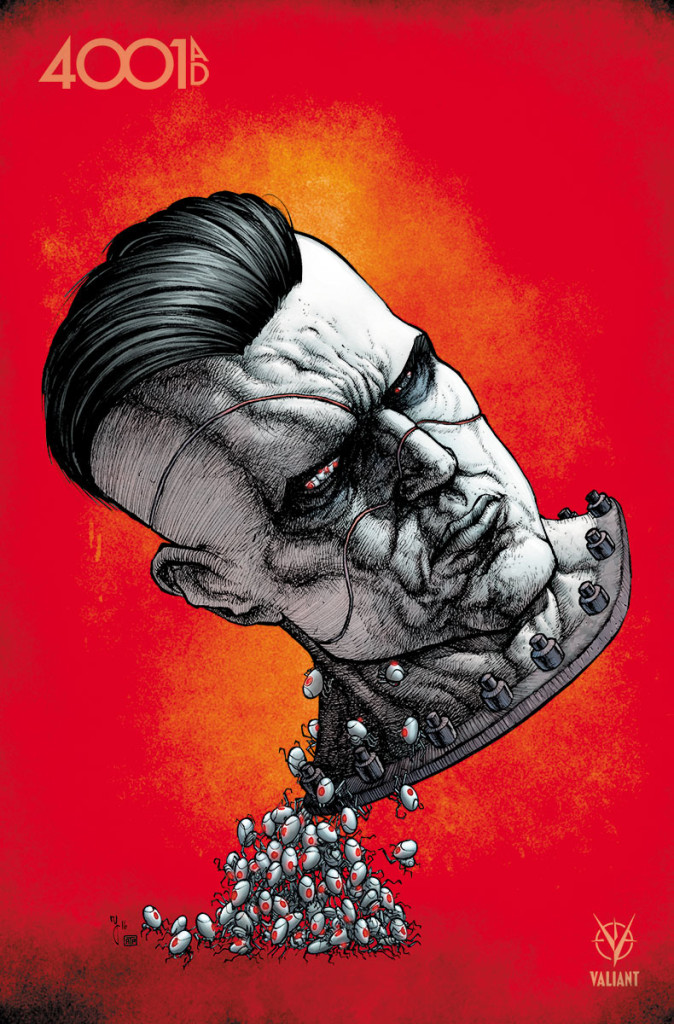 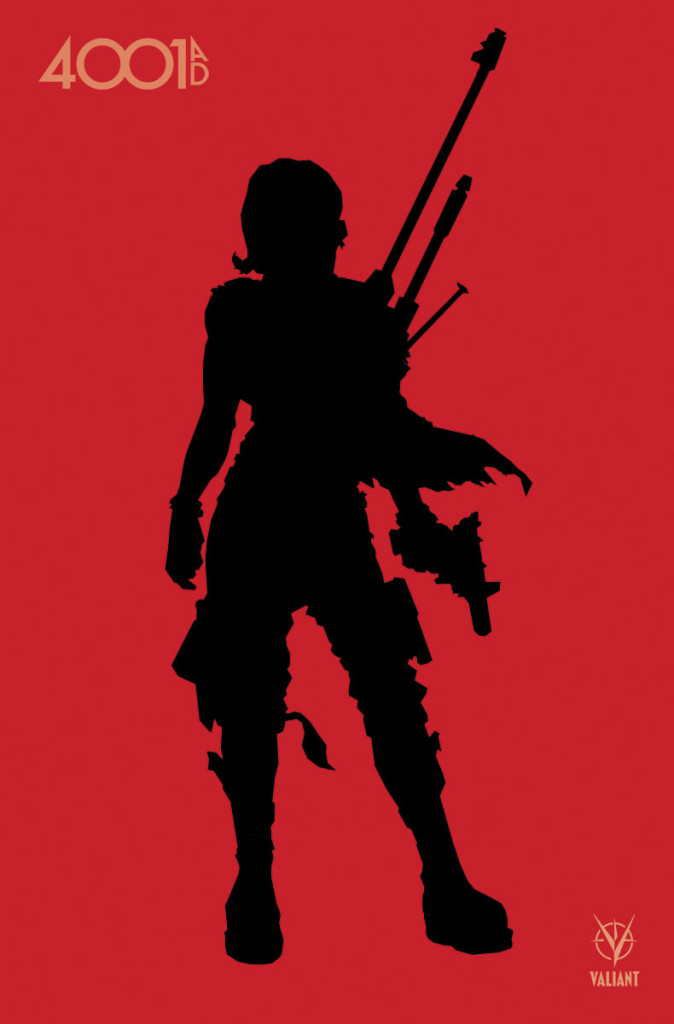 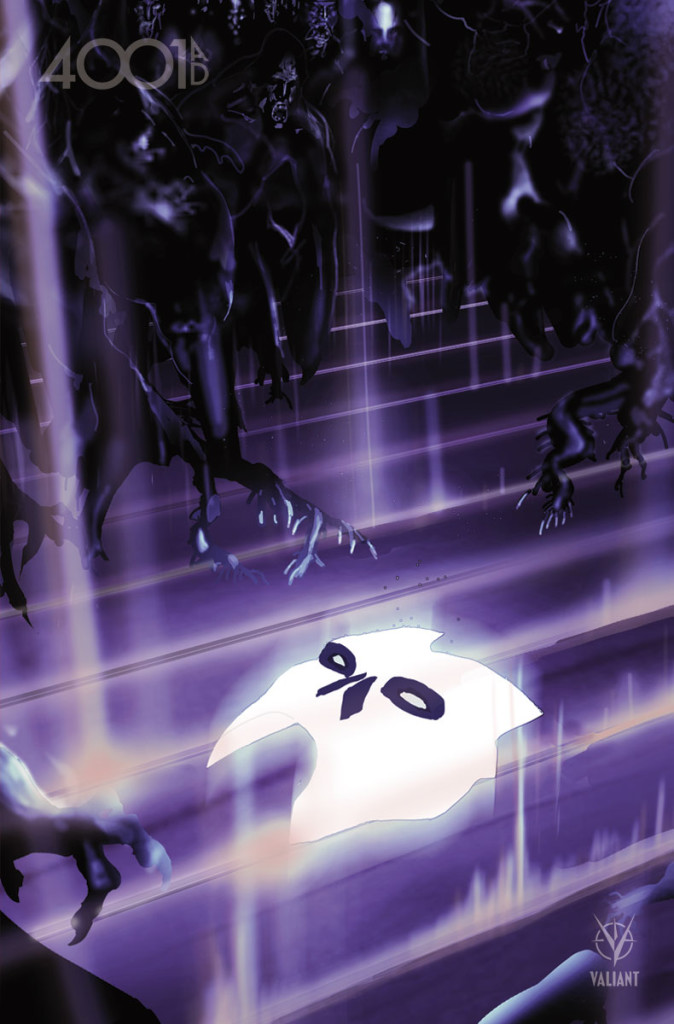 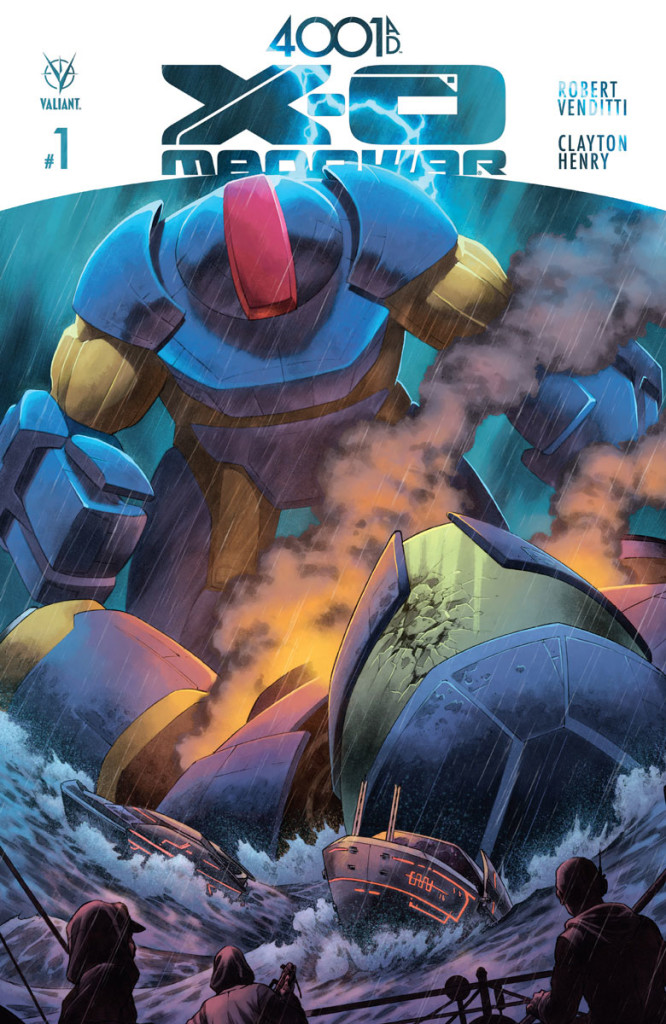 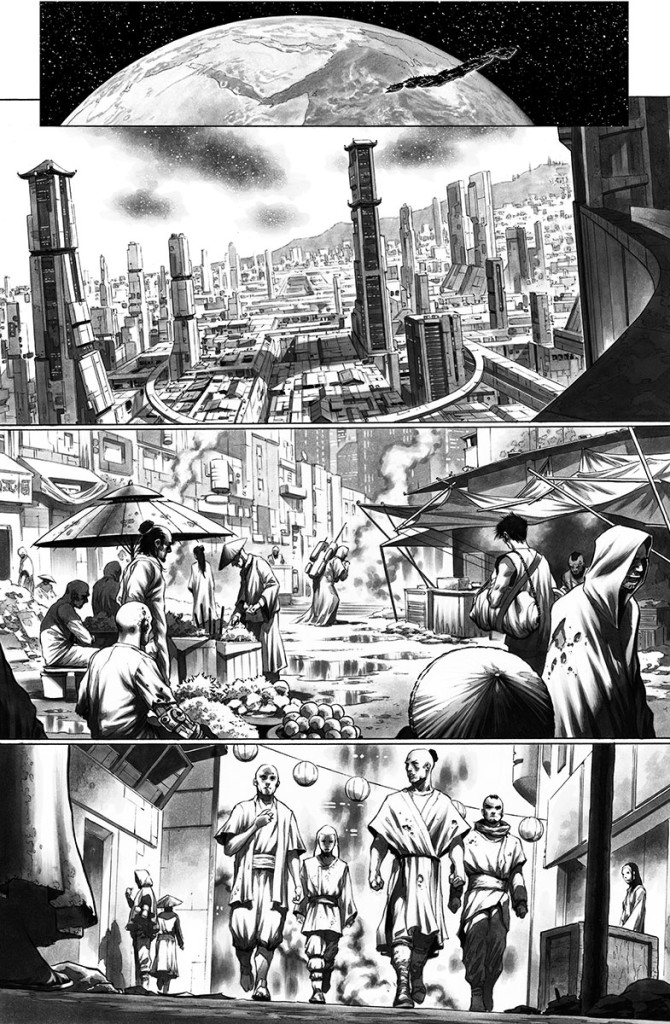 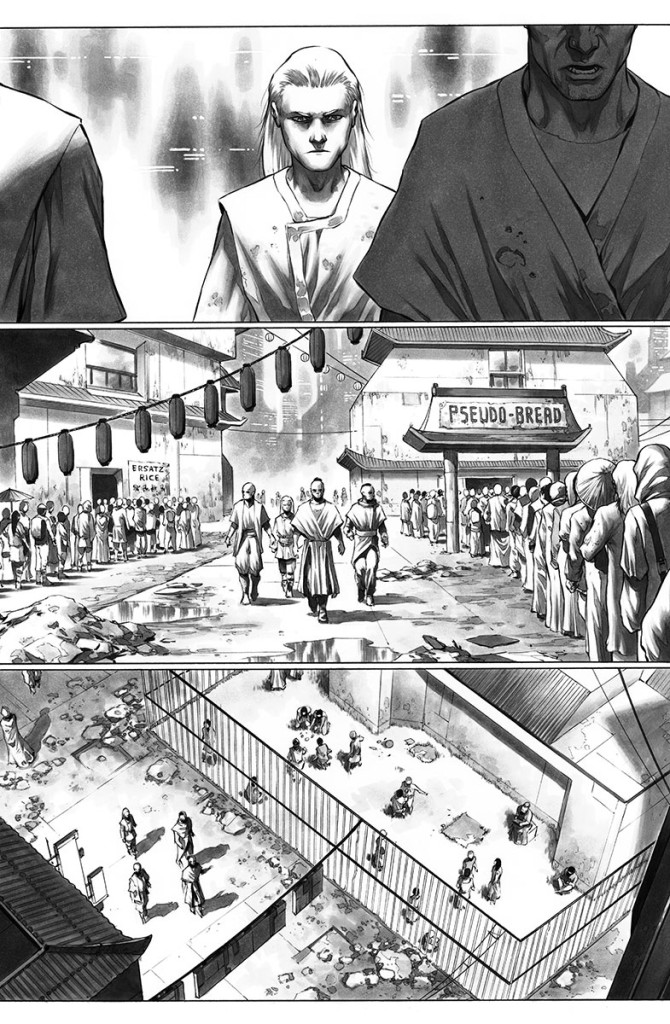 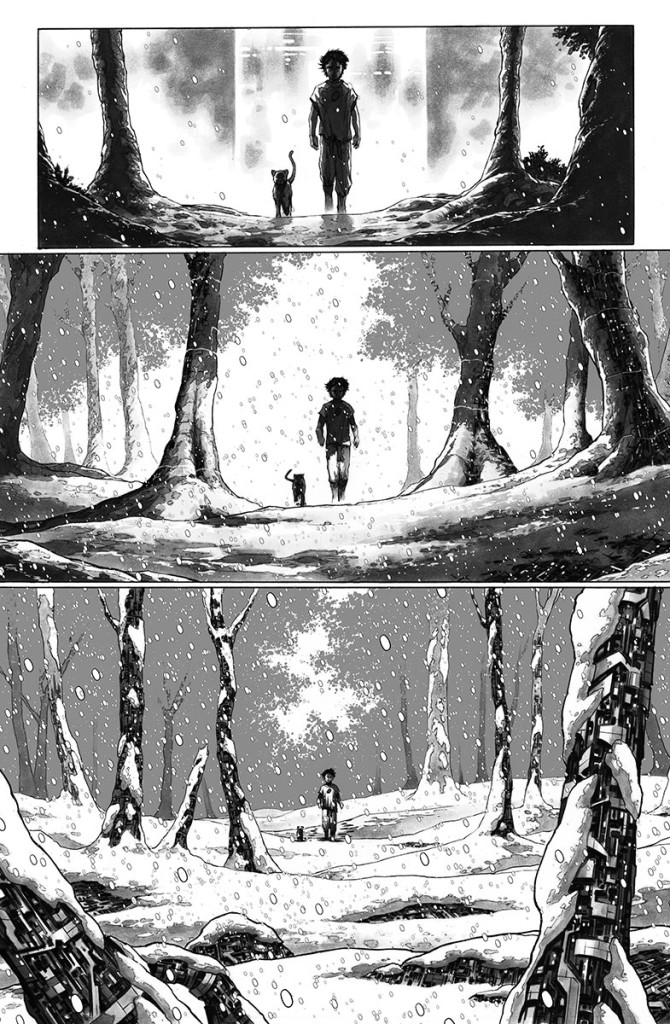 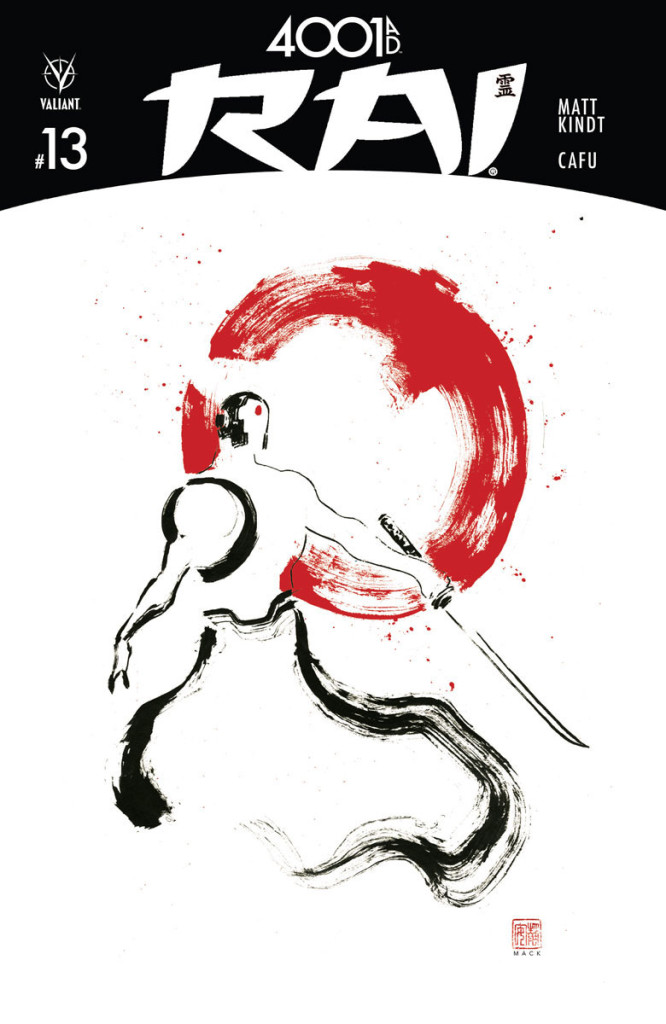 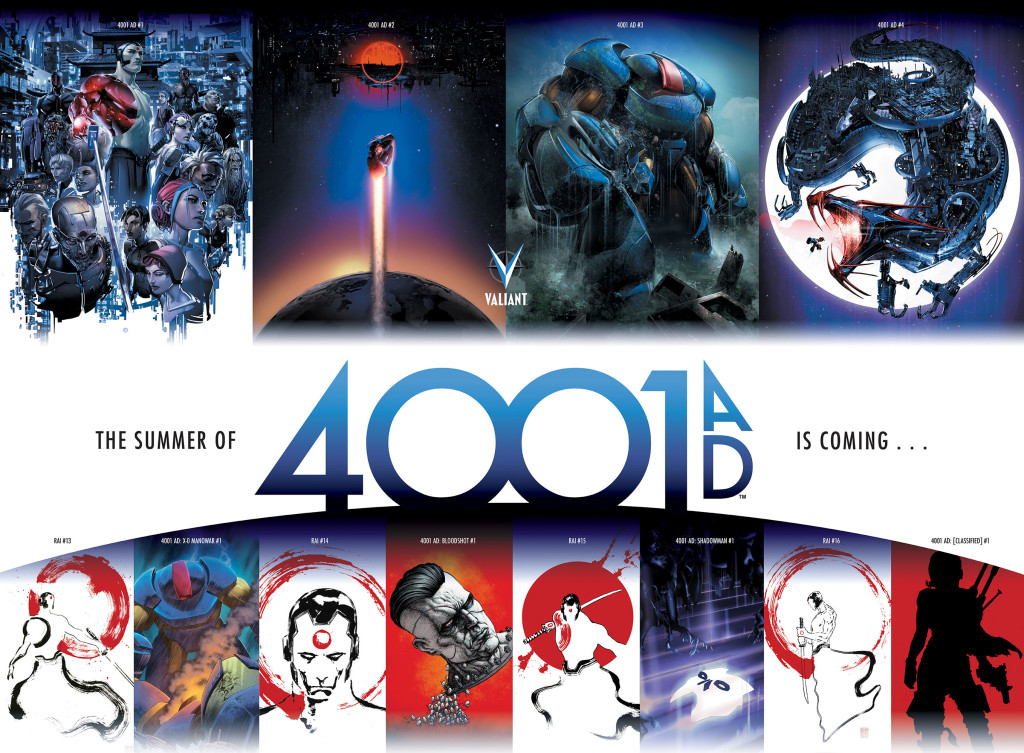