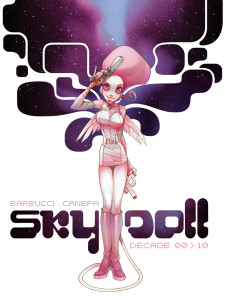 Vibrant, controversial, and unique, SkyDoll by Alessandro Barbucci and Barbara Canepa is a beautiful, surreal, exploration of love, religion, and what it means to be human. In this collected edition, Noa, the sweet and gentle android, is rescued from a life of servitude. But freedom comes at a cost, and for Noa the price might just be a little too high.

Decade includes the first three instalments of Noa’s story, as well as the prologue, Doll’s Factory, the short story Heaven’s Dolls, and a gallery of illustrations from various artists inspired by the beauty of the SkyDoll universe.
———-

Skydoll is a cynical look at the affects religion can have on its followers, with themes of freedom of thought, speech, and expression running wild throughout. The universe created by Alessandro Barbucci and Barbara Canepa is ruled by The New Church of the Immaculate Papessa, with Ludovica at its head. One of two sisters, Ludovica represented the ideals of physical love, while her sister Agape was the personification of the spiritual. Not happy to be merely one of two, Ludovica overthrew her sister, excommunicated and banished her, and declared all of her aspects of the religion heresy. What’s left behind is a church run as a marketing agency, with religion spread by stagecraft and special effects.

Countering the cynicism of the church in the story is our protagonist, Noa… a mere skydoll, created for the sole purpose of fulfilling desires under the blessing of the church’s very narrow view. After all, if she isn’t “real”, it can’t be a sin, right? However, Noa has other ideas. Well, to put it more succinctly, Noa has ideas. Thoughts. Opinions. Against her programming, she’s developed a personality independent of her original design. She wants more from her life, and to get that she’s going to have to escape from her current owner before she can get out there and explore the universe.

Enter two traveling missionaries for the Ludovican Church, Roy and Jahu. Roy is young and idealistic, believing his mission to be the salvation of the masses as he delivers the word. Jahu is older, a little more jaded, and a lot more hypocritical regarding the church. Noa stows away on their spaceship, and the hijinks ensue as personalities clash and opinions on sentience and freedom are explored.

Originally an Italian comic series started in 2000, Noa has made her way here to the states, and it’s a pleasure to have her. While the artistic style of the book is beautifully rendered with a definite adult-oriented slant, Noa herself is an obvious innocent regardless of her… um… dimensions. This large collected volume, rolling in at 230 pages, should have no trouble finding fans interested in some grown up reading, able to keep in touch with the “fun” side of religious persecution, or just wanting to look at some pretty pictures. Skydoll has all of this, and more.

For any fans of the stories put out by Heavy Metal Magazine, this is a great find. 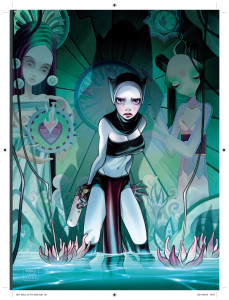 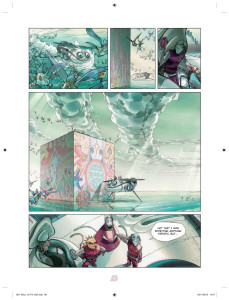 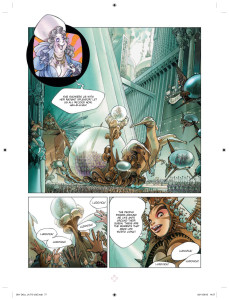 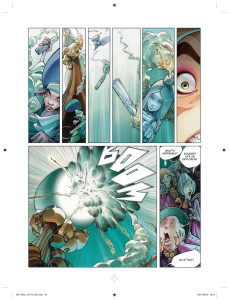 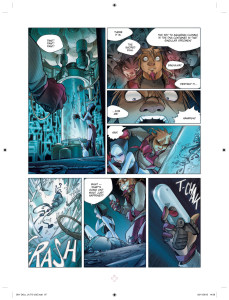 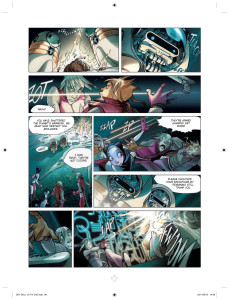