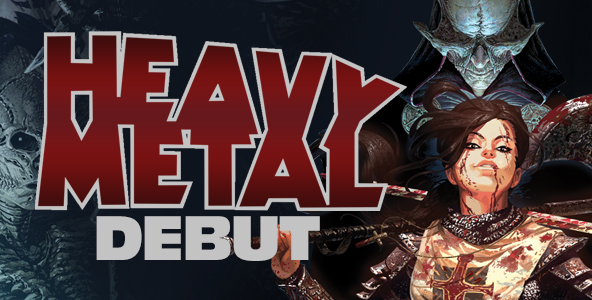 “We’re excited to finally bring longtime Heavy Metal fans a first class digital reading experience, and equally excited to introduce this classic anthology to a whole new generation of readers thanks to comiXology and Amazon,” said Heavy Metal co-CEO Jeff Krelitz. “Blowing the minds of first-time Heavy Metal readers is something that never gets old!”

“At comiXology, we’re thrilled to carry such an established publisher as Heavy Metal and we’re sure that sci-fi, fantasy, and horror comics fans everywhere feel the same,” said comiXology CEO and co-founder, David Steinberger. “Heavy Metal brings an edge to comics that we’re happy to have join us on comiXology and Kindle.”

The Kindle Store gives readers access to millions of books on the most popular devices and platforms, including Fire tablets, Kindle e-readers, iOS, Android and more.

With over 75,000 comics, graphic novels and manga from more than 75 publishers, comiXology offers the widest selection of digital comics in the world. ComiXology’s immense catalog and cinematic Guided View reading experience make it the best digital platform for comic fans worldwide.

Heavy Metal is an American science fiction and fantasy comics magazine, known primarily for its blend of dark fantasy/science fiction and erotica. The fourth oldest American comics publisher at nearly 40 years of age, some of the greatest European and American comic book writers and artists in history have appeared in the pages of Heavy Metal. Since the magazine’s inception in 1977, the Heavy Metal banner has been seen in video games, television, and a 1981 animated feature film. In 2015 the brand established it’s first-ever line of traditional monthly American comics.

ComiXology, an Amazon.com, Inc. subsidiary (NASDAQ:AMZN), has revolutionized the comic book and graphic novel industry by delivering a cloud-based digital comics platform that makes discovering, buying and reading comics more fun than ever before. ComiXology’s Guided View reading technology transforms the comic book medium into an immersive and cinematic experience, helping comiXology become a top ten grossing iPad app in 2011 and 2012 and the top grossing non-game iPad app in 2012 and 2013. Offering the broadest library of comic book content from over 75 publishers – and independent creators as well – comiXology will not stop until everyone on the face of the planet has become a comic book fan. ComiXology is based in New York City, with operations in Seattle, Los Angeles and Paris. For more information visit www.comixology.com.