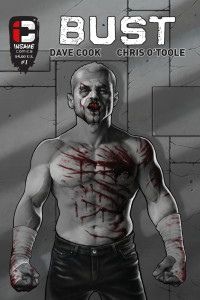 “The age of words died long ago. Now we settle our differences through action.”
Welcome to Austin, Texas: the last city in America. Hell on Earth.
In a post-apocalyptic world gone insane, Las Vegas card hustler and con man Jack must fight mutant abominations and unspeakable horrors to protect his wife and son from certain death, and repay a terrible debt to powerful kingpin Eddie Scott.
“Luckily my fists are mean negotiators.”
With each brutal punch, broken rib, and severed artery, Jack takes one more step towards freedom, and the seeds of revolution begin to grow – but, can they blossom before Jack’s luck finally runs dry?
———-

Bust isn’t a post-apocalyptic mutant zombie story. Don’t get me wrong, it totally takes place after an apocalyptic event, which was primarily brought about by hordes of mutant zombies. But those oft used tropes in the comic book world serve as a backdrop for the actual story. In the spirit of The Walking Dead, Bust tells the story of Jack, a self-professed card hustler who made a living off of the weakness of compulsive gamblers. When the Bad Times hit, Jack sees chaos and anarchy running wild in the cities, and tries to get his family as far away from anything as he can. The plan was to get to the coast, get on a boat, and head anywhere else. Like with all good plans, Jack finds out “there’s many a slip ‘twixt the cup and the lip.”

Through a series of truly misguided and tragic events, Jack is forced to remake himself, to become the fighter that he never was. Over the course of the story, as told to us by Jack himself, we’re given a look at how far a person can push themselves when given the right motivation. Throughout this book, Jack’s motivation is one hundred percent focused on saving his family. It’s a bloody and violent ride, with some psychological twists and turns that might give you a nudge in one direction when you thought you were going in another.

The story behind Bust is an interesting one. It’s told in the first person, through a series of flashbacks as Jack relates his story to the reader/audience. At first, I wasn’t quite sure where it was heading, but it was absolutely not where I thought it was going. At one point, I wasn’t sure that I was getting into the book at all, but pushed on and was rewarded in the end. Patience and perseverance are the key, a lesson that Jack learns the hard way. The black and white artwork by Chris O’Toole is effective, even though it might seem a little off at times. One of the things it did remind me of was James O’Barr’s work on The Crow. As should be shown by the cover art, Bust is often pretty graphically violent, so don’t say you went into this expecting something light and chipper.

Overall, I was impressed with this Kickstarter funded one-shot issue, and remain hopeful for future entries hinted at in the creator’s afterward. I’m new to the publisher, Insane Comics, but so far I’m liking what I see. 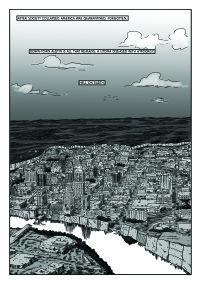 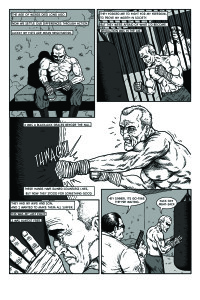 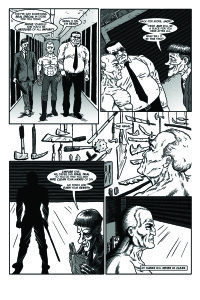