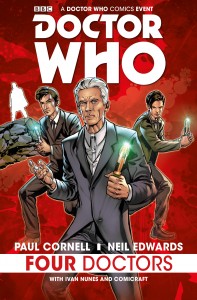 …THE LAWS OF TIME SAID SHOULD NEVER HAPPEN!

Don’t miss this unforgettable first meeting between the Tenth, Eleventh and Twelfth Doctors, with guest cameos from past incarnations, and an astonishing mystery at its heart!

Written with style by Paul Cornell, Hugo Award-winning author of Doctor Who episodes ‘Father’s Day’ and ‘Human Nature/The Family of Blood’, and drawn by superstar Neil Edwards (Iron Man,
Amazing Spider-Man, Legion of Superheroes), this five-part crossover adventure, collected for the first time, will take you from the Time War to 1920s Paris, and on to the ends of the universe!

This was great fun. Any time you have more than one Doctor in the room, something interesting is bound to happen. Doctors Ten, Eleven and Twelve are caught in a fixed point, and it spells
destruction. Each of the Doctors have a companion along, although only Doctor Twelve has his TV-canon Clara. If you’ve been reading either Ten or Eleven’s individual series, you will already know Gabby and Alice. If not, you get a brief introduction to who they are without going into much detail, as you don’t really need it. The series actually opens on the War Doctor working
with Time Lord allies the Vord as a Dalek ship crash lands on their planet. What transpires is left for future Doctors to solve.

Paul Cornell grabs your hand and runs through this mystery-adventure with deadly seriousness wrapped in glee. Cornell lives in the Doctor’s head, bringing in Reapers when the story gets too
paradoxical, and throwing in all the self-arguing appeal of ….any multi-doctor team up. It’s quite fun to see Doctor Twelve put the smackdown on Doctors Eleven and Ten, while managing to be
both helpful and rude in any incarnation. The companions are not really the focus of this story, yet they’re not lost in the shuffle. Everyone gets a moment, which is very nice. The story is just
complex enough to make you wonder what will happen next without going off the deep end into over-complicated territory.

Neil Edwards’ art fit the story nicely, doing a great job of making iconic faces stand side-by-side with pure fiction seamlessly. Both action and just talking look fantastic, making those timey-
wimey moments pieces of art that you could sell by the poster.

If you’re a fan of modern Doctor Who, you’ll find a lot to like in this book, and the collection includes all the little end cartoons and extra covers. It’s a delightful read. Enjoy! 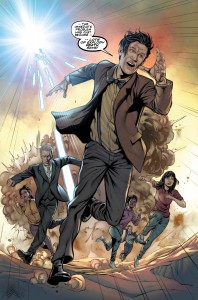 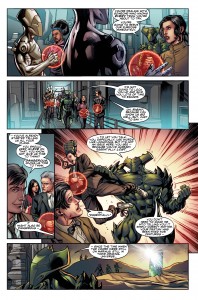