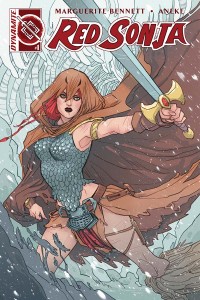 Through the plains of Hyrkania, a message sweeps through the scattered peoples of the nation. Bells ring, horns blow, voices shout – the King is dying! Red Sonja rides to save the King from his doom as the powers of Hyboria crowd around to strike when the kingdom is weakest. But a dread new power rises from within Hyrkania’s own borders, bent on defending its homeland – no matter the cost, no matter what its people become. A defining chapter of the Red Sonja saga – dark, clever, vicious, and funny – as the She-Devil with a Sword must stop the rise of a brutal new regime… her own people!
———-

“The latter days of the Hyborian Age. Through the plains of Hyrkania…”

The King of Hyrkania is dying the best death a King could hope for… old, in his bed. His court has done everything it could to prolong his life, sending agents out into the world for any elixir, any mythical cure for the one killer that hunts all men, regardless of station. In the end, the king makes his peace and settles himself to ensure a successor to his throne.

Of all people, he offers the crown to one of his most loyal agents, Sonja of Hyrkania. He believes that she would be able to keep the surrounding kingdoms from jumping at the chance to invade, but Sonja turns him down. She knows what kind of ruler she’d be, and that wouldn’t be one that would do Hyrkania any good. Instead, Sonja determines to defend Hyrkania with sword and fist, traveling the land and jumping into the fray anywhere she might be needed.

The glitch in that grand plan is that the new King is doing a fine job without Sonja’s help. The borders are secure, trade is booming, and bandits are looking for easier pickings in other kingdoms. Sonja is left to ponder the flipside of the adage, “May you live in interesting times,” with interesting generally being the euphemism for violence and anarchy.

With everything going so well, what’s a “she-devil with a sword” going to do? No worries, kids. This opening salvo in the newest chapter of Sonja’s adventures might start out with a contented sigh, but it isn’t going to last. Another adage that comes to mind is something about “too good to be true”.

As always, the character of Red Sonja is one that’s pretty easy to mishandle, falling into the realm of cheesecake and fluff. Fortunately, the creative team of Marguerite Bennett and Aneke seem pretty handy at giving Sonja the right amount of wry wit and gruff self-awareness to keep her grounded, and at no point is a chainmail bikini on display. What we do get is Sonja trying to figure out her place in this apparent Utopia created by the new king of Hyrkania, with no battles to fight and no maidens (or lads) to be rescued.

Red Sonja can be a great character if done right and taken seriously… but not too seriously. So far it looks pretty hopeful. If you’re looking for some fantasy reading, with a heroine who takes great joy in obliterating gender roles, this should be a good addition to your Pullbox. 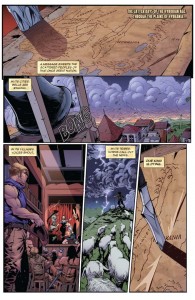 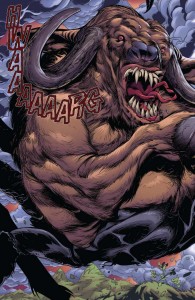 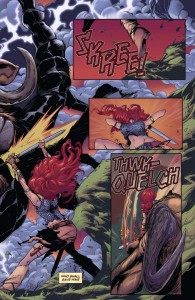 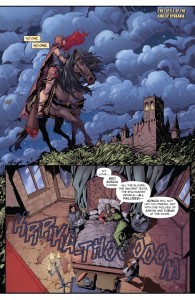