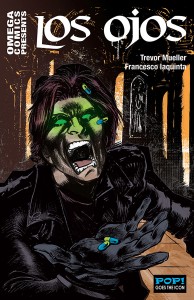 Andres Sanchez sees demons. Literally. When he looks into a person’s eyes, he can see whether or not they are truly demonic in nature. Hired to find and assassinate a known child trafficker, Sanchez goes on the hunt, taking out demons as he perceives them, getting ever closer to his target. But can Sanchez truly trust what he sees?

This seems like a standard contract killer story, but not entirely so. Trevor Mueller writes the story of Andres Sanchez, who has always been able to see demons if he looks in their eyes. Not bad guys or human scum; actual demons. His code of ethics is that he won’t kill humans, no matter how bad they are. He walks into confession one day because he thinks he’s killed someone, and the story unfolds in the confessional. The story is actually told as a series of flashbacks, with the confessional serving to move the story along. There’s a lot of story to tell, but it moves fluidly thanks to Mueller’s deft storytelling.

Francesco Iaquinta’s art is gritty and dense, which works for a black & white comic like this. Every page is clearly rendered and inked. The people and the monsters are easily discernable, even when people happen to be monsters as well. I would love to see Iaquinta’s art with a good colorist behind him, hopefully in the near future.

Mueller and Iaquinta created an interesting and readable story. It’s a well-plotted and written story, with no filler or big splash pages to use up story space. As this is a one-shot, everything is wrapped up neatly at the end, but the door is open just enough for a continuation if one is needed. If they don’t continue with this book, I hope to see them doing more in the future.

Omega Comics Presents: Los Ojos is now available for only 99 cents at ComiXology and DriveThruComics. A limited-release print edition will be available beginning Jan. 20 through PopGoesTheIcon.com and at select comic book stores, including Defiant Comics in Forest Park, Ill.