DOCTOR WHO: THE ELEVENTH DOCTOR #2.5 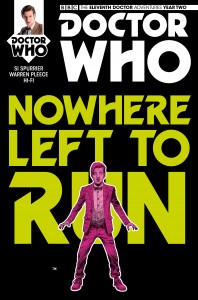 Time to take the fight back to those who have accused the Doctor of horrible war crimes! The TARDIS team needs to break into a remote prison to get the tech that will allow them to pull off an incredible heist… Sounds like they’ll need some expert help!

The middle of a story line is no place to do a review, unless it’s Doctor Who and published by Titan. They very nicely tell you where you left off at the beginning of the story, and then it’s all new discoveries from there. If you’ve been reading this series all along, you know that the Eleventh Doctor’s current companion (created for the comic book series) is Alice Obiefune, a library assistant who started traveling with the Doctor right after her mother died. They’ve picked up two other people along the way – Absolom Daak (a hired mercenary) and the mysterious Squire (who worked with the Doctor in the past) – and are off to solve the mystery of who is framing the Doctor for the murder of the Overcast. They’ve already given hints to it, and even stronger hints in this issue, but the villain has not yet been spotted.

What I love about Doctor Who is the interpersonal relationships that are formed, even in a brief amount of time, and the team of Spurrier and Williams delivers on that. You have two different people who have known the Doctor at two different times, so naturally their insights on him will be different. Also, you have a bounty hunter whose wife’s body has been taken hostage by the TARDIS, so with him and Alice, you have people who still have grief fresh in their minds. Plus, putting the Doctor on another planet to solve something amazing brings out the strong Doctor-ness of the Doctor.

Artist Warren Pleece does a fine job blending characters we know with characters who might not be as familiar, and the movement in this situation is very much what we want from our Doctor. Plus, Alice is having little flashbacks that are very nicely rendered, and he obviously had fun making the planet landed on very alien indeed.

If you’re thinking of reading this series, you’ll want to pick up all of the issues. We know you’re a Doctor Who fan and you’ll want to see it all. Don’t be freaked out by starting in the middle of the story, though. Think of it as one of those wibbly-wobbly, timey-wimey situations. You’ll feel right at home. 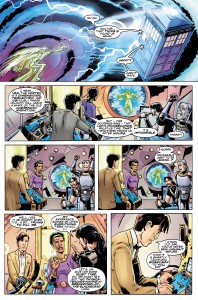 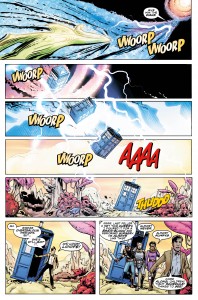 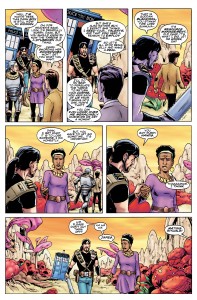 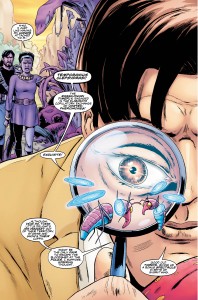